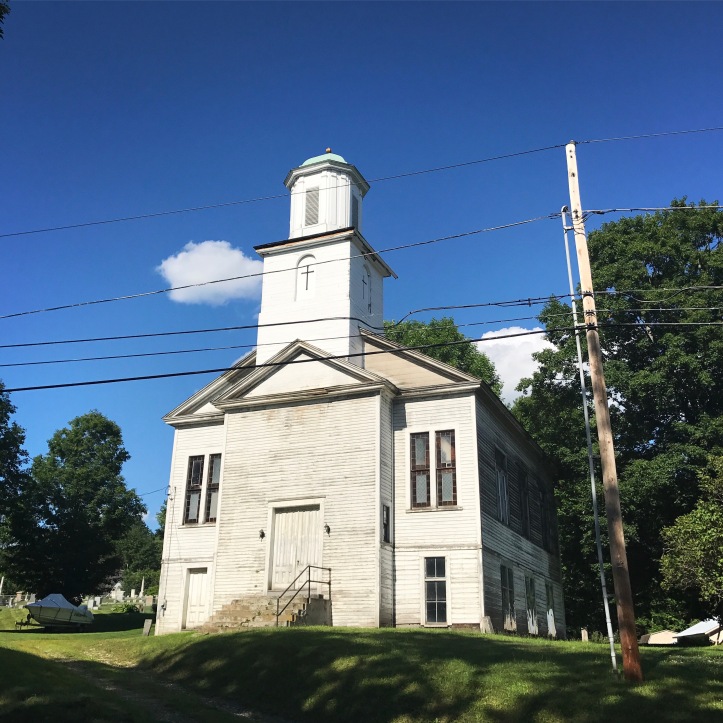 Spent the first half of the morning at the lodge with megan. Had another very large bowl of oatmeal and good coffee for breakfast. Then she drove me to the trailhead where I left off Sunday afternoon. Here’s another rare chance for a picture of me since I’m alone more than half the time (and I hate pictures, but look I didn’t make a face in this one). 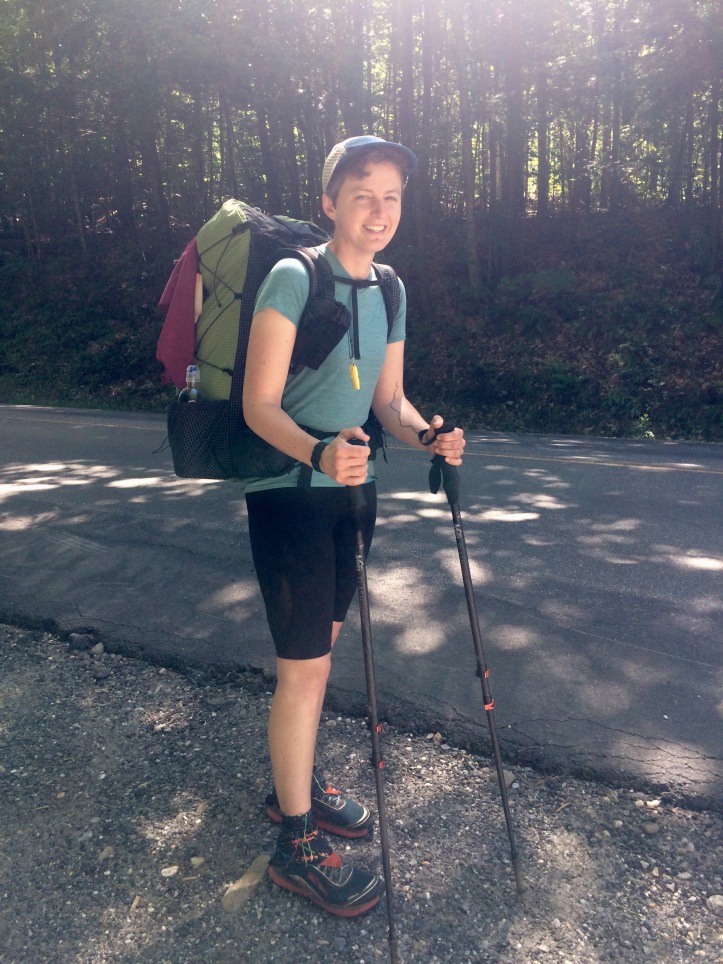 Megan left for her long day of driving and I went up the shallow, steep steps up from the road. It was hard to walk away from someone who brings me so much comfort and joy, and the climb up a steep hill with a full pack just added insult to injury. I was sweating and short of breath before the halfway mark. It finally leveled off to a peaceful bit of trail that once again had me checking my map because it seemed too easy. It was wide with dappled sunlight and a rock wall bordering the trail off to my right. 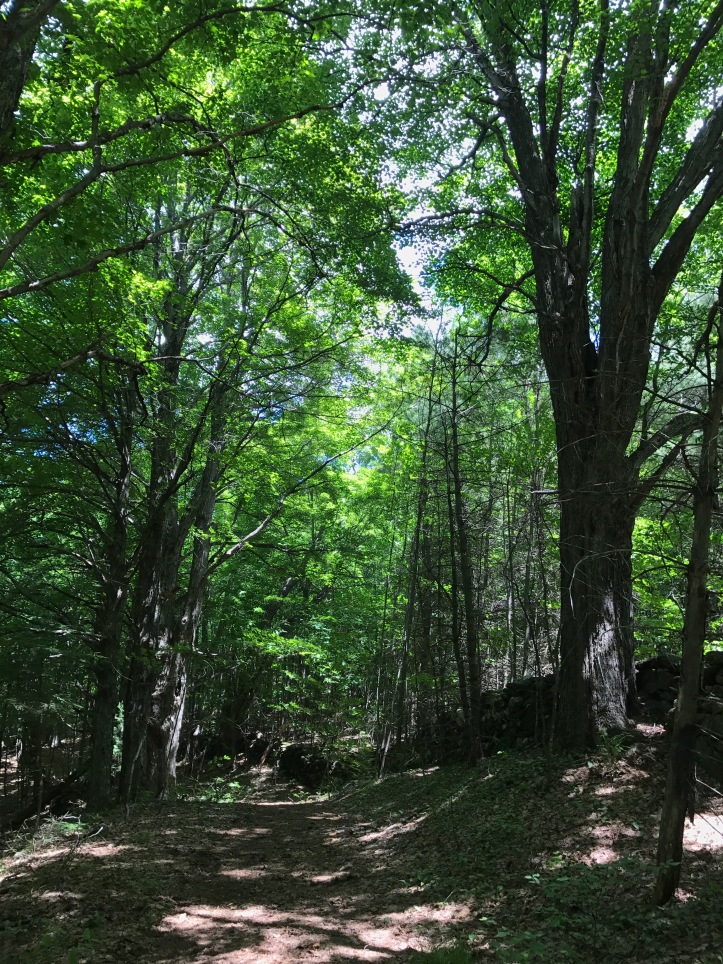 To stave off some of the acute loneliness, I called my mom. My phone signal tanked almost immediately. Between three or four different dropped calls, we managed to cobble together a conversation. In amongst those calls were several small climbs between fields of wildflowers, one of which led to this view: 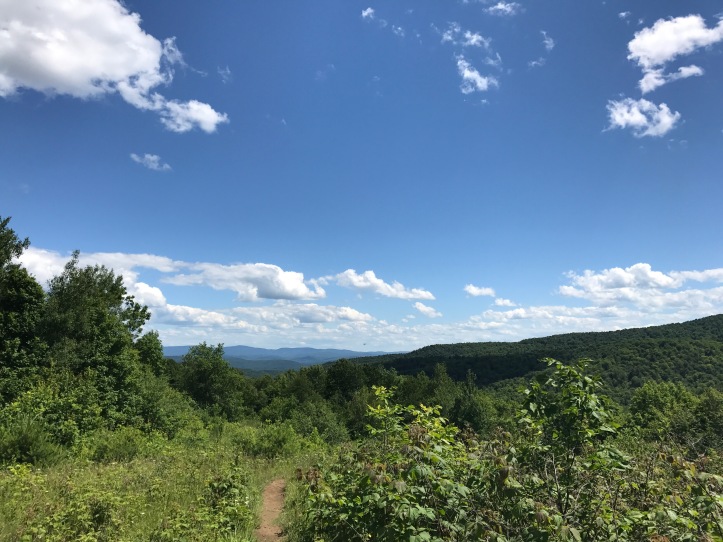 An older couple were standing at the top of this section. The gentleman had wide red suspenders and a sturdy walking stick. As I approached, prepared to say hi/bye so I could get back to my phone conversation, the woman said to me, “slow down and look around you at the view, you don’t get this kind of a view often.” I wanted to say that I’d seen just such a view like 5 times in the last two days, but I held my tongue. As my mom waited for me on the phone, I told the woman I had taken in the scenery already and had seen a beautiful 360 degree at the lookout. She then dickered with me about how far away the Lookout was. In an attempt to get off the subject and move on, I walked past her and said “look at all this great smelling milkweed.” This led her to make a mournful remark about how the monarch population had dwindled. I finally had to say that I needed to keep going because she didn’t seem like she would let me leave of her own accord.
The trail dipped back down, and I lost my mom on the phone, again. I crossed a dirt road and went around a gate that led to some sort of tree farm. I looked down and happened to see a tick crawling on my shin, one of only about five that I’ve seen so far on my person. The trail skirted the edge of another overgrown field and then tucked back into the woods. Here’s the view back towards the hill I came down on the other side of the road. 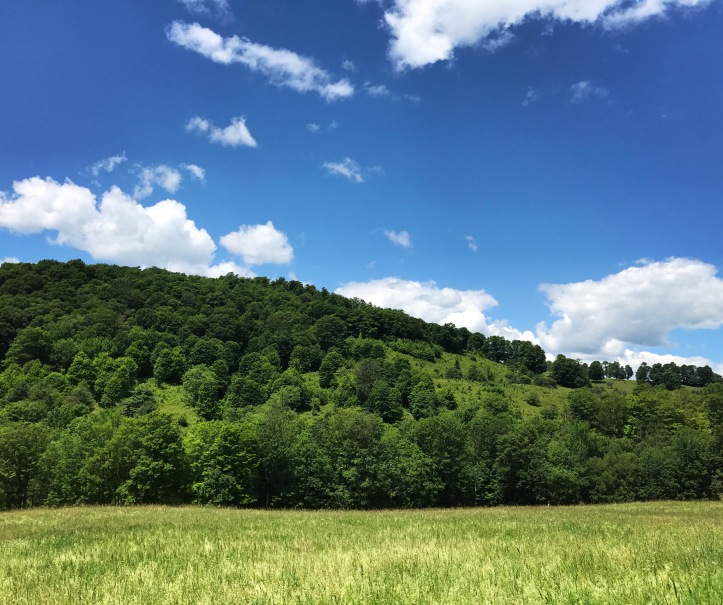 Around 130, I stopped just past the trail to thistle hill shelter and had a late lunch on a log in the shade. Two people went by from the shelter trail, likely having stopped for water. I didn’t feel like walking any extra mileage today, so I decided to see if I could eek by and maybe snag water from an unmapped stream. This seemed likely given that I passed one such stream less than a quarter-mile beyond my lunch spot. 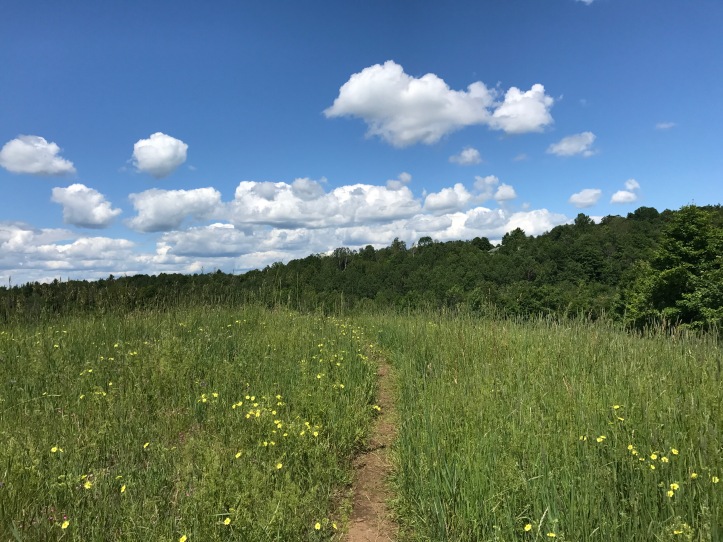 The trail took me through more wildflower fields. The colors of those sections were mesmerizing between the flowers, the green of the trees and the bright blue sky. I had to work hard not to take pictures every 10 feet so I could get to my destination before bed time. I was already running about an hour later than I had hoped because it was hard to say goodbye to megan.

The trail then went down a series of switchbacks, and I saw more of what I’m pretty sure is maple syrup tubing. The forest transitioned to an extra thick canopy, which gave the illusion of twilight even though it was only about 330 in the afternoon. I hate walking through that kind of light. It’s depressing and I get a reflexive urge to speed up for fear of hiking into the night. I passed through a section of spindly barren trees that I’m guessing might be dead hemlocks. The broken off branches and brown cast felt somber and kind of creepy.

Thankfully the trail led me through a much greener section shortly thereafter. Doesn’t it look like these trees are topless? Maybe it was more dramatic in person. 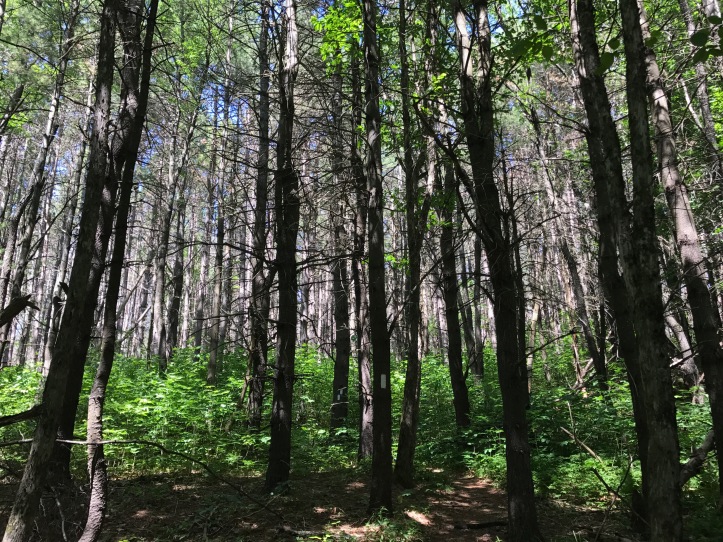 I passed through another little section of wildflowers and saw this bench: 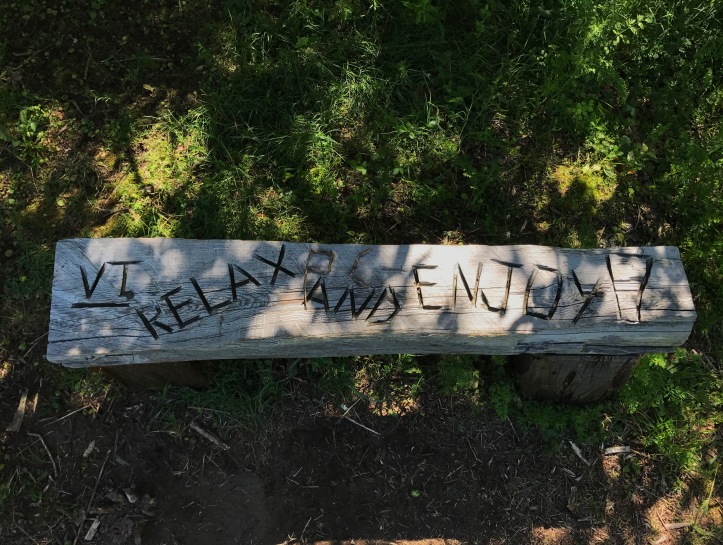 I decided to follow the instructions even though I hadn’t intended to stop for a couple more miles. I plopped down, grabbed a snack and looked up to find this view: 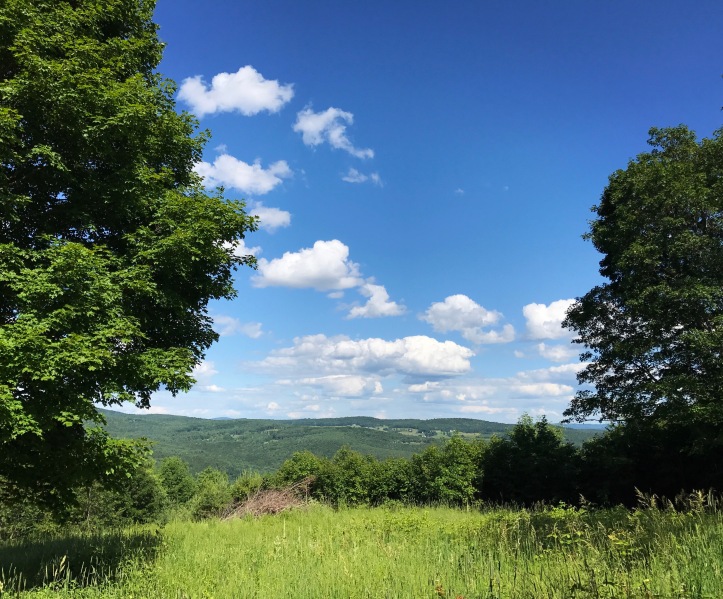 Then came the mile long gradual descent into West Hartford, VT. I texted with zach/French dip/baby gay as I made my way down to town. He made it through the white mountains (most people shorten that to “the whites”) and offered to give me some pointers about shelters and whatnot. I gratefully accepted his guidance because I’m anxious about the whites. I wish I wasn’t likely to do them alone. Although from the sound of it, there will be a lot of people around.

At the edge of town, the trail took a hard left and followed two roads through west hartford. I popped out right as a family passed by on their way to a barbecue. No offer of trail magic, which is fine because I didn’t need food, but I would have killed for a cold drink of some sort. I had not consumed enough water and it was just hot enough to day dream about Gatorade and popsicles. 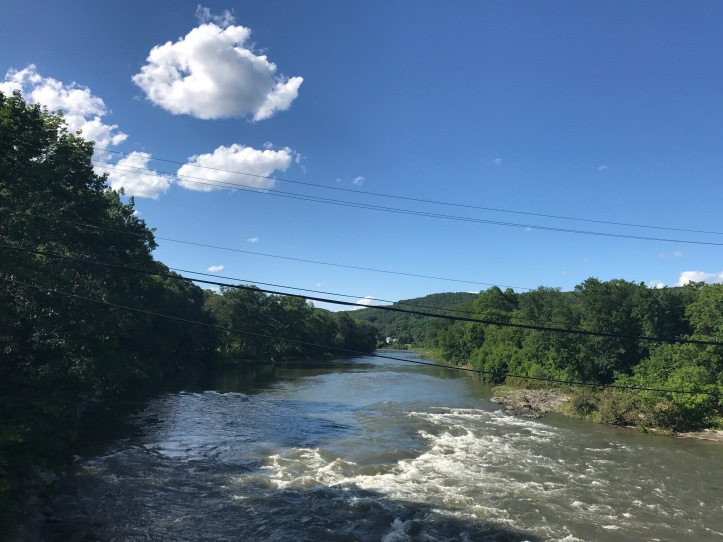 The walk through town was longer than I had hoped. I saw an old meeting house building that caught my eye (top picture). Along with the white river, which the trail crossed before heading north and taking a right across some railroad tracks and back out of town. I walked under highway 89 and then the trail headed back into the woods after crossing Podunk rd. How fitting.

The climb from podunk was steep and tedious because of roots and muddy sections. I could not get to the water source fast enough. As I checked the map to see how far I had to the stream, I realized that I had two more climbs between me and my destination. This is not the kind of elevation map you want to see at 5p when you’re tired and thirsty (I’m the little blue dot): 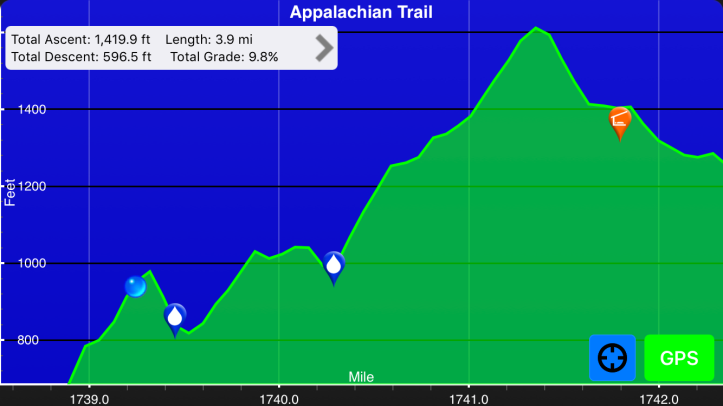 I plugged on and made it to the stream where I ran into the pot smoking duo from Glastenbury. They had some sort of ramen frenzy judging by the 6 ramen wrappers strewn around their cooking pot. I’m guessing they got a serious case of the munchies and couldn’t wait to eat at the shelter. I said hello and busied myself with water. Then I ate a tiny snack and studied the stream. The water covered many of the useful stepping stones making it nearly impossible for a short legged person to get across without taking some seriously long steps over wet rocks. I shouldered my pack and picked a path that had one bad step that was unavoidable. I came away with a wet right foot, but it could have been worse.

The trail over the next two miles got muddier, rockier and buggier. It’s like the rule of the trail that the terrain turns to shit right before you’re done for the day. I cursed at the soggy sections, swiped at my ears constantly to thwart the buzzing, and wanted to cry when I saw a particularly aggravating muddy rock hop. The second climb wasn’t as bad as the map made it out to be, but I was still relieved when I got to the gradual downhill before the shelter.
The turnoff for the shelter led me down a short trail, past the privy and to a small stone structure with a tiny, nearly unusable second story. Two people sat at the shelter’s edge eating dinner. We said hello and commiserated over the bugs. I mentioned that my earbuds were in only because I couldn’t take the buzzing and the guy admired my strategy. I zombied around looking for a tent spot, settling on a mediocre spot right next to the shelter. I didnt have the energy to wander around for something better and it was close to everything. I pushed through tent setup and then boiled water for dinner. I had intended to filter water while while my food rehydrated but I lost motivation immediately upon sitting. I also had a good conversation with the people that I didn’t feel like leaving. Their names are in flux and pretzel. They met at a hostel a ways back and have sort of been hiking together since. Influx is a NOBO and pretzel is a section hiker from Australia. She’s doing VT, NH, and ME after having just completed the te aroara, which is a trail that spans the length of New Zealand. I’d heard of the trail and know how difficult it is, so I gawked over her hiking experience. She’s also done the routeburb track, which Fp and I did during our trip last year, so we talked about how great that hike is. Yet again, hikers talking about hiking. Shocking.

I made chili Mac and added a hard boiled egg that I took from yesterday’s breakfast at the lodge. Then I added some VT cured pepperoni that I bought at the farm stand. Influx admired my meal and I told him I’d been thinking about it for the last 4 miles. I had planned on eating something smaller, but I was aggravated and tired and I’m PMSing so I went for broke. Speaking of periods, I actually got mine about 5 minutes before we left the lodge, which brings me back around to the annoying hand washing/extra water filtering aggravation. Not to mention the cramps and the tired feeling. Good times all around.

I did my dishes while I sat with influx and pretzel. They’re funny and easygoing, but they are doing high miles so I probably won’t see them again for awhile if at all. I left them to filter water so I could deal with my cup and brush my teeth. After doing the necessities in the five star gigantic moldering privy, I wandered around the woods looking for a sturdy branch to hold my heavy food bag. I got my line on the second throw and hung my bag easily. As I walked back to my tent I realized that I definitely had forgotten to empty my snack pocket. This happened even though I had sat at dinner and seen pretzel do the exact same thing. So frustrating. So I grabbed my snacks, walked all the way back to my bag, pulled it down to throw my food in and then rehung it.

Then I had to put my bed together, which I had yet to get around to. When it was all said and done, I laid on my sleeping bag at 9p. Way past hiker midnight. Now I’m finishing this up to the sound of the stream down below the shelter. The fireworks are over and the moon is peeking through the trees above my tent. Tomorrow I will finish VT! That makes state number 8. I wonder when I will catch halfway again…

Creature feature: a woodpecker landed on a tree trunk about 3 feet from me, the usual chipmunks, a cardinal, which I haven’t seen for quite awhile, and a very cranky red squirrel who fussed at me from a branch overhead.