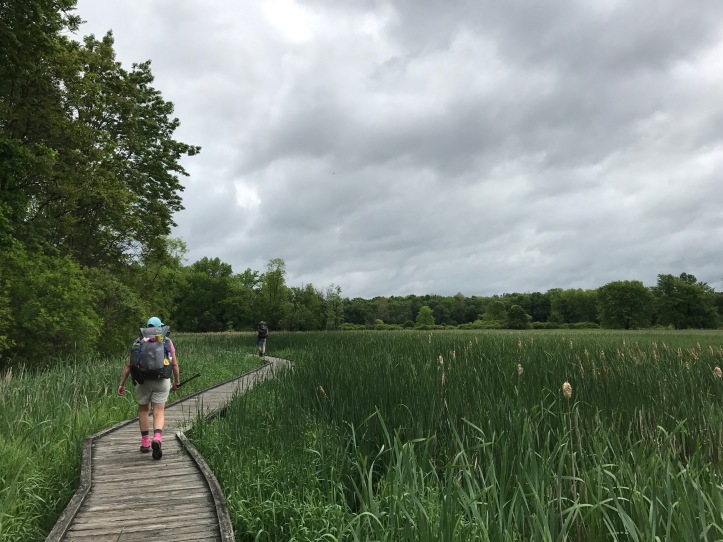 I woke up around 1030p to the sound of a thunderstorm and snoring so loud that I nearly punched the owner of the nose. I crawled out of my bag and peed in the rain just out of sight of the shelter. I had hoped jostling in/out of my sleeping bag would stir the snorer enough to make him stop, but to no avail. Guess who it was? Hee-hawing dude with too much energy. His trailname is triple check, by we’ve been referring to him as triple snore all day. Thankfully, he’s southbound, so I won’t have to worry about sharing a shelter with him again.
Another thunder storm rolled through later in the night. I managed to fall asleep about an hour after first waking up. When I woke up for good around 545, it was still raining, but only a light drizzle that ended before I left the shelter. Having 6 adults and all of their gear in such a small space when you can’t expand to the picnic table is tricky business. I kind of love it because it forces you to be efficient and aware of your space. I boiled water for my breakfast at the front edge of the shelter and then moved back to my sleeping bag so someone else could have prime cooking real estate.
It took a lot of grumbling to be able to put on my wet clothes from yesterday. I have another pair of running tights, but if you walk in wet clothes they dry off. If I leave the wet tights in my bag, they stay wet (and oh so smelly). On my body they went along with my wet socks.
The morning started with a hefty but short climb that left me huffing and puffing. I got so much sleep, but felt a little sluggish this morning. The woods were so green today because of the rain. The path was a mud pit in places, but it could have been worse. After a couple of more ups and downs, the trail leveled off to a lowland section full of ferns and skunk cabbage. We crossed a stream that had motivational graffiti (and was a good water stop).

Eventually the trail dumped us at a road crossing and the beginning of the famous jersey boardwalk section (top picture). It’s a raised walkway over a wetlands that were filled with red winged blackbirds, wild yellow irises, and other things I wish I knew the name of. It was magical to walk through, but the wood hurt my feet after awhile. We crossed this suspension bridge, and happened to run into a man walking his dog (hound of some sort) who was part of the volunteer group that built the bridge. 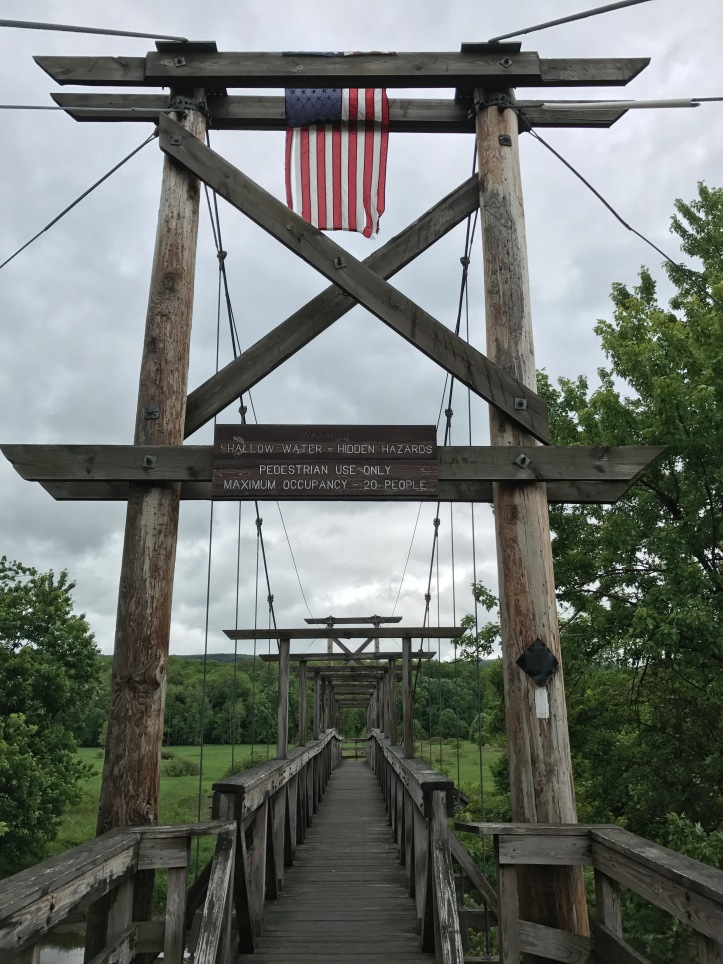 We also saw a couple pesky little terriers that were running amuck and their owner kept running after them. After the boardwalk finally ended, we came to a road crossing that led to heaven hill farm stand. JD and tai chi got there first and a former thru hiker named teach offered to buy our whole group lunch. I already had my lunch ready, so I opted for a pear and a bag of chips. Teach is planning a southbound hike of the PCT later this summer. She cray.
I felt antsy sitting around the farm stand and it was starting to get cold, so I left first and had a solo walk up what locals call “the stairway to heaven.” At the top of which you get a good view of the neighboring mountain (that we crossed) and the mountains of New York.

Buzzcut caught up with me at the viewpoint and we left together. Somewhere along the way she stopped to massage her feet, so I didn’t see her again until I stopped to filter water. I ran into JD about 20 minutes after the viewpoint. We walked together for a bit and he had the joy of hearing me yell “son of a b*tch” when I took a step into mud and got my dry feet wet again. He also witnessed my first full-on fall from standing position. My left foot hit a slick spot on a wide flat rock, and I went down onto my hip. My first thought of course was TAILBONE, but I came out of it physically unscathed minus a middling bruise. I felt rattled and cranky, so I let JD go ahead of me and nearly cried, but I didn’t want to be seen blubbering. He hiked out of sight, but right around the corner I ran into him waiting for me because he wanted to show me a frog. Then we crossed a little bridge that ran over this creek. 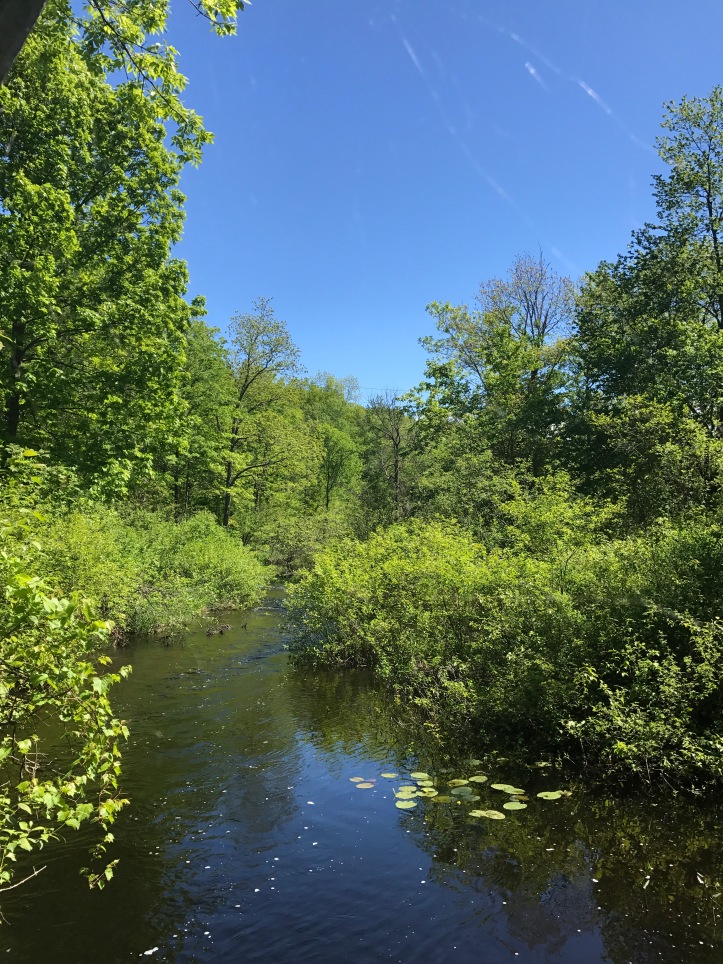 As you can see, the sun came out! The afternoon was beautiful in terms of weather. I felt distracted and sad for reasons I don’t feel like sharing, so I tried to focus on the things around me. Saw a few different kinds of ferns than the usual fare. Either that or they just looked different because they were so much taller. 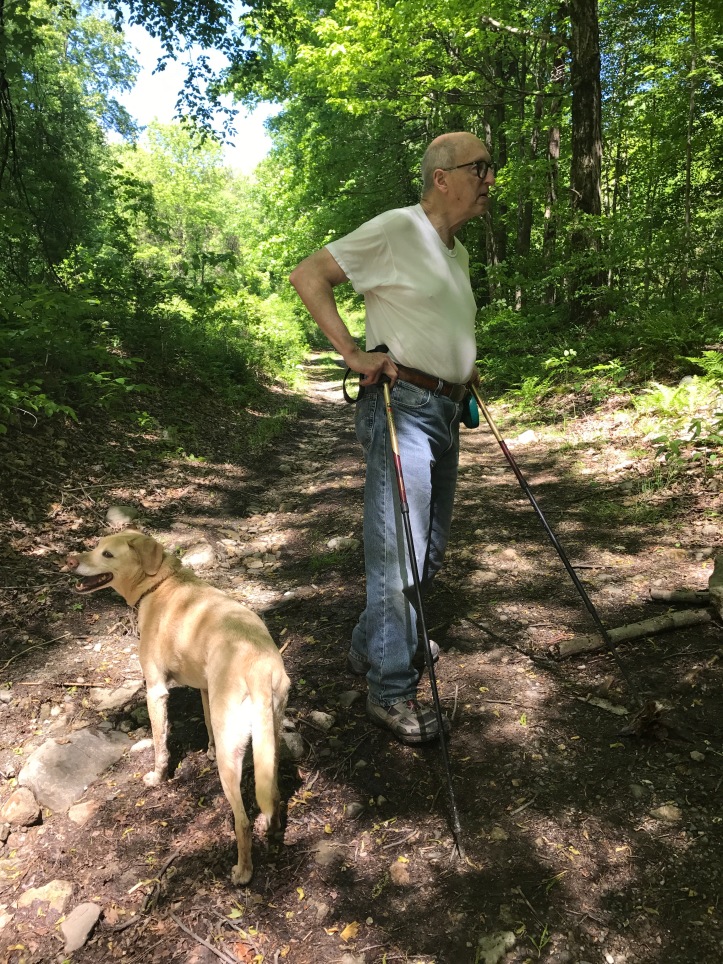 After the creek crossing, JD and I ran into this fellow and his dog (so many dogs today). He had a lot of questions about the trail that I didn’t have the patience for, but JD is meant for that kind of conversation, so I left them to it. I sat by the creek and filtered water and tried to breathe my way through the static in my brain. I saw buzzcut and jd conferring up the bank from the creek, but I couldn’t hear anything because the water was too loud. I had mentioned stealth camping to buzzcut to try to get in a few more miles today, but she wasn’t interested in going longer. I say stealth camping because in NJ you’re only supposed to camp at designated shelters and campsites.
I took my now annoyingly heavy pack full of water (because the shelter for tonight doesn’t have a water source on site) and walked the last mile to the shelter. Buzzcut and company went to the state park about 10 minutes past the shelter to use the bathrooms for bird baths. I had hopes of us being able to camp at the park instead of near the group of teenagers we knew were at the shelter, so I went ahead with my heavy pack to the park. Of course, being a holiday weekend, there’s no camping left, which made me crabby because it meant backtracking to the shelter. I loitered with the group in the sunshine until I couldn’t stand sitting still. I was worried about camping space at the shelter so I got ready to leave, which caused a mass exodus of everyone except tai chi. He hammocks so he just needs trees and doesn’t really have to worry about real estate.
We got to the shelter to find the teenagers hanging from hammocks. A little backstory: this group of kids showed up at yesterday’s shelter in the rain around 5 but there’s was no room for all 4 of them. They proclaimed that they didn’t have tents, but there was just no physical way to get them AND all of their stuff in the space left. So they sat at the picnic table in the rain and laughed and sort of planned a solution, but mostly it sounded like a shit show. Today we saw a southbound hiker who said he ran into the teenagers as they were heading into the shelter st 9am to secure their spot for THE DAY and overnight. So we knew they were there and they’ve just been hanging out all day. It’s not an actual rule that weekend or section hikers defer to thru hikers on this part of the trail; it’s just unspoken etiquette that thru hikers get space priority. To their credit, they actually gave up the shelter.
Anyway, we got to the shelter and had it to ourselves. I’m regretting my choice not to tent because the mosquitoes are terrible and I wish I could feel the breeze blowing through the trees. Instead I’m listening to a mouth breather and feeling kind of claustrophobic. I also nearly fell flat on my face while trying to get in the shelter after dinner. I stepped on a rock out front, but my center of gravity didn’t come with me up into the shelter so I fell backwards and couldn’t get my footing because the rocks were not level. I ended up windmilling my way over the rocks and wrenching my good ankle a little bit. Let’s hope that doesn’t bother me tomorrow. I feel like a disaster today! But now it’s time to sleep and soon it will be breakfast. My first favorite meal of the day. (because they’re all my favorite)
Mile 1350.4 to mile 1361.9 (11.5) (not counting the extra trip to the state park)
Total miles: 358.7
Creature feature: red winged blackbirds! And the cutest little chipmunk who poked his head out from under a rock while I was standing still in the middle of the trail. When I looked up, he pulled out of sight, but as I turned my head sideways to peer under the rock, he peeked out again so we had a moment of staring at each other. I also saw another orange spotted newt. Those little guys are in the middle of the trail all the time. I hope I haven’t stepped on any.