Well I survived the floor of the Murray shelter with no apparent spider damage. I woke up to the hiss of JD’s sleeping pad and the sound of light rain outside. We had plans to get breakfast at horleys general store, so I ate part of a bar with peanut butter while I packed up my stuff. there’s a scale on one of the other buildings so buzzcut, treebeard and I walked over in the drizzle to check our weights. Mine came in just under 23 pounds with water and 2.5 days of food. Buzzcut’s was about 27 with barely any food and treebeard came in right at 30. Because of my lighter weight, JD (whose pack weighed 41 pounds!) has taken to saying “what would checklist do” when it comes to gear choices. And he keeps telling me about all of the things he’s going to mail home.

We reluctantly left the warmth of Murray shelter and walked for a little over an hour into unionville, ny. This section of the trail hugs the state line between jersey and ny, so we hiked in both states today. The hike into town involves a few boardwalks such as this: 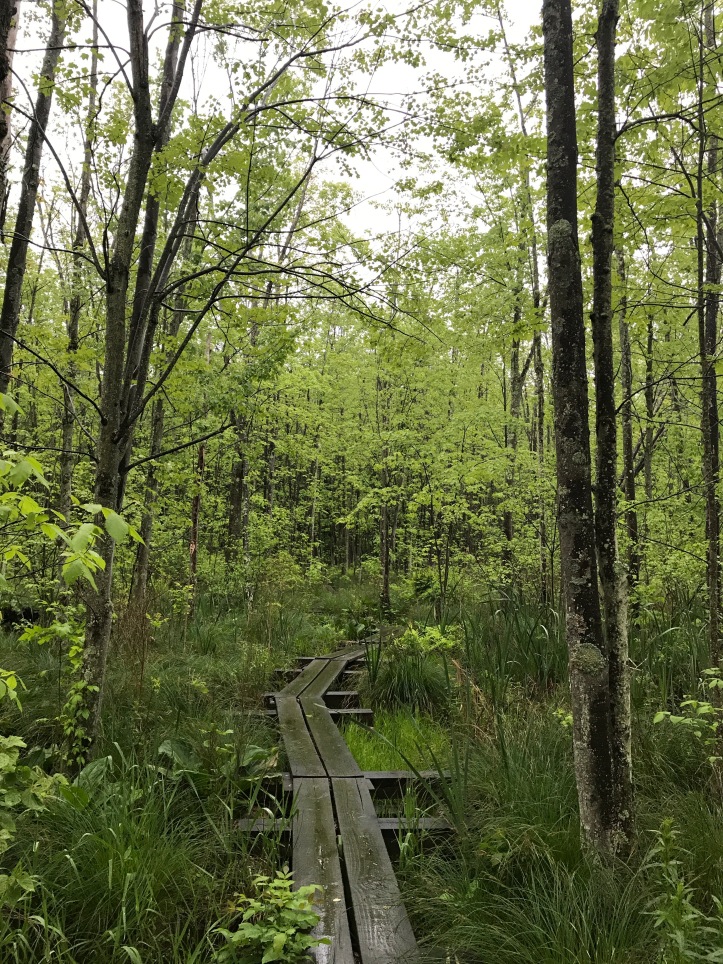 At horleys, I got an egg, cheese and sausage on an everything bagel. I rooted around the store looking at food options while I waited for my sandwich. I’m getting an interim food supply to get me most of the way through Thursday morning. Rice, pb, and cliff bars forever! after breakfast and food shopping/organizing, we decided to loiter until 11 to get a burger and beer at Wits End tavern. I let go of the idea of hiking 18.6 miles to the second shelter from murrays, so today was another short day. Given the cold weather and short distance to the first shelter, it didn’t seem necessary to rush out of town.

It’s hard to kill 2 hours sitting on the porch in 55 degree rainy weather. We loitered in the store, paced around, got a tai chi lesson from Tai Chi (go figure). When it hit 11, buzzcut mentioned that we should walk down to the restaurant. It was at that point that tai chi said, oh no the tavern actually opens at noon. Why he didn’t mention that sooner is beyond me. Buzzcut was in the cold, angry place, and I couldn’t fathom sitting around for another hour, so we went across the street to annabels pizza to get warm. I ate part of a mediocre steak and cheese sandwich. I couldn’t stomach eating more bread tonight for dinner, so I packed out the filling with some lettuce to make a lunch wrap tomorrow.

A soaked hiker walk into the pizza place and held a clipped conversation with us. Then bed of every one of his sentences was like running into a brick wall. He seemed to recognize me, and he said, yeah I remember you, you were going by pretty fast. To which I said, well then it definitely wasn’t me, which got a good laugh from the peanut gallery. The hiker (trailname: sleeve) fished around to find out where we were staying, which made me say under my breath to buzzcut, we need to leave. The shelter we’re headed to isn’t very big and none of us wanted to tent in the rain. We were out of there in about 5 minutes.

The walk back to the trail was windy, which felt great given than the rain had picked up while we were inside. The next 5 miles were a soggy mess, with a hefty road walk sandwiched in the middle. We went through a long series of boardwalks and skirted part of the wallkill national wildlife refuge (top picture) There were red winged black birds, ducks, and I think I saw a heron fly over the water. Apparently JD saw a goldfinch, but I missed it.
After the preserve, we crossed a road and went up a calf burning hill. About a third of the way up, there was a side path that led to an abandoned house with an outside spigot. That’s the water source for our shelter tonight, so buzzcut and I took the detour. As I’m writing this, I can hear how strange that sounds, but that’s how things are out here sometimes. I whined about having to head up the rest of the steep hill with four extra pounds of water. Buzzcut had a good laugh at me, and then we slogged our way to the shelter because there isn’t any other way but forward.

We lucked out with an almost empty shelter. The only person there was a guy named Cujoe (because he likes the book) who i met back at the church of the mountain. He had foot troubles around the Mohican outdoor center, and took a day off to get it checked out by a doctor. We swarmed the shelter. Now there are clothes and packs hanging on every available corner and 6 people squished across a 16 foot wide shelter. We had a very mellow vibe for awhile and then a very enthusiastic section hiker arrived. We told him about the donkeys at Murray shelter and he literally hee-hawed at the top of his lungs. I told him if he did it again, he’d have to sleep outside.

Now it’s 630 and we are basically all ready for bed. It feels like 10p even though we didn’t walk very far today. I’m trying to reason with myself and say that it’s okay and that I’m resting my wonky ankle. I don’t plan on taking a full day off before I take a break for my dads birthday, so a couple of lower mile days is probably good.
Mile 1343.3 to mile 1350.4 (7.1)

Total miles: 347.2
Creature feature: just the birds I mentioned earlier. too soggy to notice much else and there didn’t seem to be much moving around