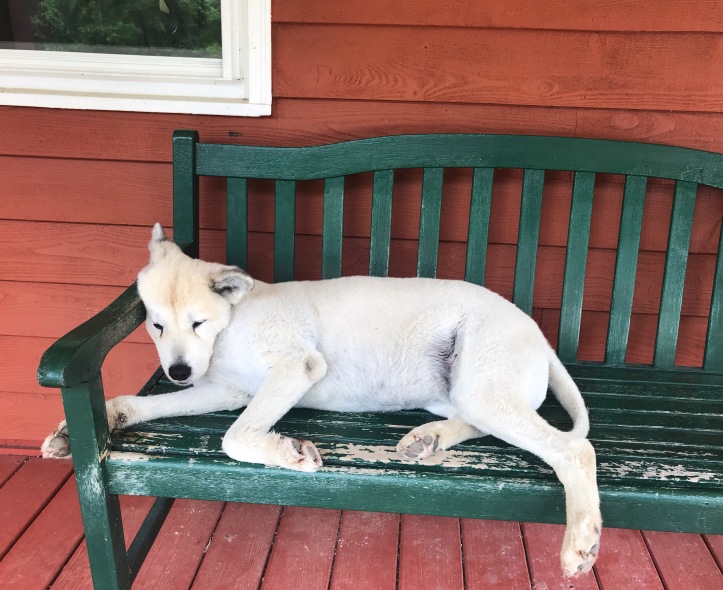 I had a pretty restless night of sleep, between the comings and goings of people, the cool temperature (I finally put my puffy coat on), and the blue tv screen that I couldn’t figure out how to turn off in my stupor. I woke up around 6:15 and was a phone zombie for awhile. I finally decided to physically get out of bed around 7:30. I joined the masses up at the big house waiting for the infamous breakfast. It was indeed glorious and I ate far too much food. The biscuits and the French toast were incredible. There were eggs and sausage and potatoes with maple syrup and bacon. There’s no way I can eat this way tomorrow and actually hike anywhere.

After breakfast, I creeped on my new section hiker friends and asked them if we could be social media friends. I had hoped they would ask me first, but I finally just took the plunge. I said goodbye to them in the parking lot and went back to the hostel to start my zero day! Which means I’m going to truncate this entry somewhat to account for all the time I’ve already spent staring at a screen and doing chores today.

There were many packages to go through. My food drop and new shoes from HQ. A letter, ankle braces and cookies from Oakland. A card from my dad and stepmom to read and treats to add to my food. I washed my cookware and back-flushed my filter. I spent copious amounts of time updating social media. I managed to eek out two blog posts and wished I had done more. I ate too much heavy greasy food (more French fries with dinner and a grilled cheese sandwich). I managed to eat a salad with lunch that also included bourbon barbecue chicken wings, which I don’t think I’ve eaten in years.

I goobered out over all of the animals. 3 dogs, the 2 barn kitties (turns out they’re sisters named Oda Mae & jackpot), and a 16 year old goat named Rosie.

I talked to an older gentlemen who has had more on-trail injuries and false starts than me. I had a few FaceTime calls with Oakland. I checked in with my mom on and off as she navigated the funeral service for my grandmother. I said farewell for now to dizzy and brownie, who I’m sure I will see again soon.

I met a few new hikers who arrived in the afternoon and stayed awake playing battleship downstairs like nerds while the bros watched the NBA playoffs. I pulled a colossal dingleberry from one of the fat cat’s butts because I couldn’t stand to watch it walk around fussing with it. And, per the usual, I stayed up far too late trying to plan for the next 7-10 days and writing today’s notes. By the time this post goes live, Oakland will be hiking with me! You’ll probably be relieved to stop hearing about all the phone calls I make to her. Instead you’ll have to suffer through pictures!

I’m finishing this to the sound of the box fan, the occasional creak of my upstairs bunkmate, the heavy breathing/allllmost snoring of Doug, the man who works/lives here and sleeps on the couch, and the buzz of bugs outside.

Creature feature: dogs, cats, and a goat, oh my