I slept like the dead until my watch alarm went off at 6am. I always forget that I have to physically turn it off or it will go off at 6am everyday until its little engine dies. I should correct myself, I slept like the careful dead because I was very aware of turning over and keeping my ankle on the gigantic pillow I had under the covers. My king size bed comes with KING SIZE pillows that are perfect for elevating my leg and for nighttime leg/foot pillows.

of my zero day, but I’ll give you the highs and lows and probably too many details

because I am terrible at moderation.

I had breakfast on the picnic table out back with the rushing creek as my soundtrack. then I wandered over to the communal space/main building that houses an eating/microwave cooking area, couches, and a “front desk” all in one room and a small side room with resupply options and freezer food. A gaggle of hikers were getting ready to head to Spivey gap for various slack packing endeavors. I sat around watching the shit show of several young dude bros drag themselves around trying to get ready while holding up the entire operation.

While I watched, I asked Sara and Taft if they knew where I could buy an ankle brace. There’s basically nothing around here so any option I had would be in Erwin. A German hiker named granger offered me her ankle sleeve which I tried on. it felt like a tight sock that would do little in the way of actually supporting my ankle. I heard Taft say he needed to go to Walmart for Gatorade and I swooped into his conversation asking if it would be possible for me to tag along. I didn’t really want to spend two hours roaming around the winding country roads, but I also didn’t want to embark on my slack packing plan with just a disposable ace bandage. 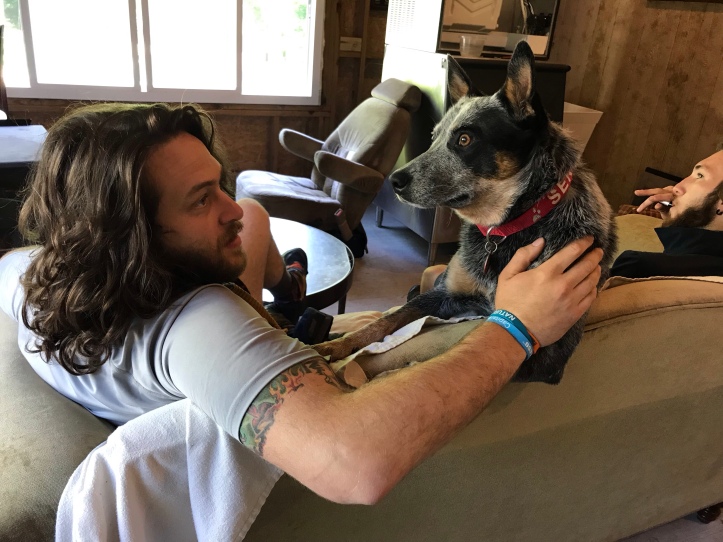 In the midst of all of this, an adorable cattle dog wandered around. I obviously pounced on the dog and took copious pictures while petting it incessantly.

The boys finally deemed themselves ready so we all piled into the van. I sat on the first bench behind the passenger and still managed to get queasy because the roads are just that windy. The dog (named udo I think) clamored up and over me to squish himself into the seat between me and another hiker whose name I didn’t get. Here’s a couple of selfies I took for Oakland that I will share with you so you can see what a van full of hikers looks like. 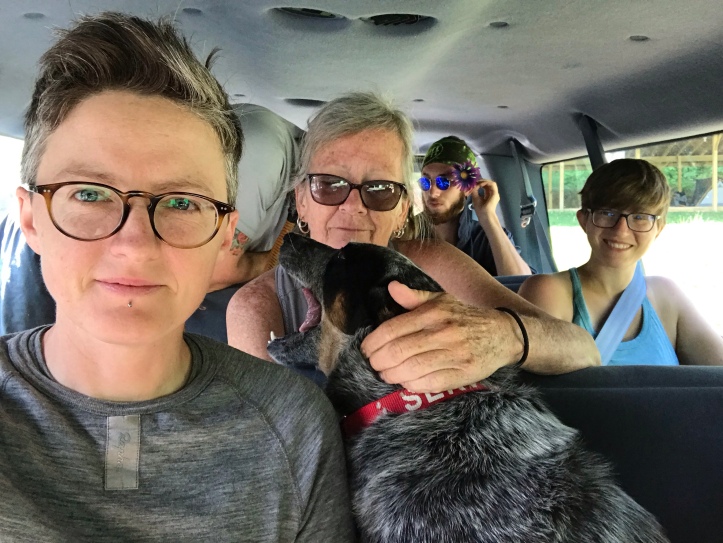 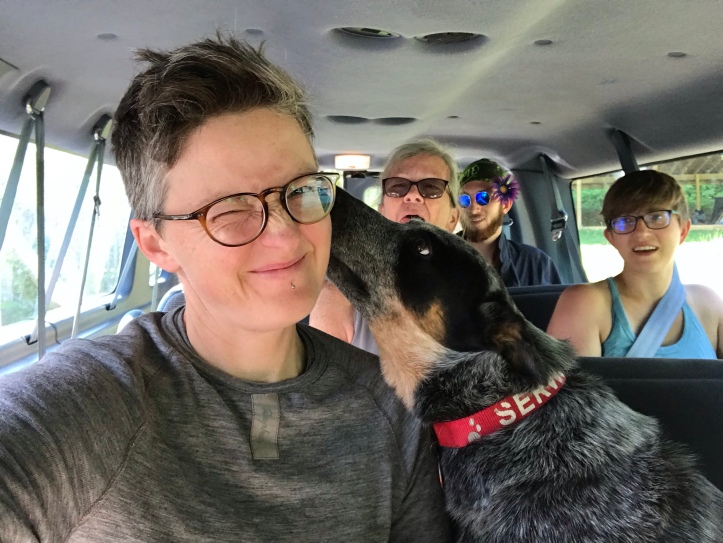 I held onto my cookies (barely) for the drive to Spivey gap, bid farewell to my new bestie, and rode onward to Erwin with Sara. We dropped the packs at uncle Johnny’s and I saw a pair of hikers I hadn’t seen since Hiawassee (the couple who I went to breakfast with and whose names escape me).

On to walmart we went, where I bought GREEN THINGS, yogurt, a few candy bars, and a halfway decent ankle brace. I was beside myself with joy over the food. I loathed the idea of eating only packaged food for the next several days while I use this as home base, but I knew they didn’t go to Walmart very often. Lucky me. I also bought an older Australian hiker named Rosie a packaged salad because she too is craving greens and will be staying here again tonight.

We got gas on the way out and as she got back in the car, Sara said in a forlorn voice, “wellll I have to make one more stop before we head back. I have to go to pals to get a cheeseburger.” I laughed and agreed wholeheartedly with the extra trip. I ate my feelings and got a cheeseburger and fries, which were really good. 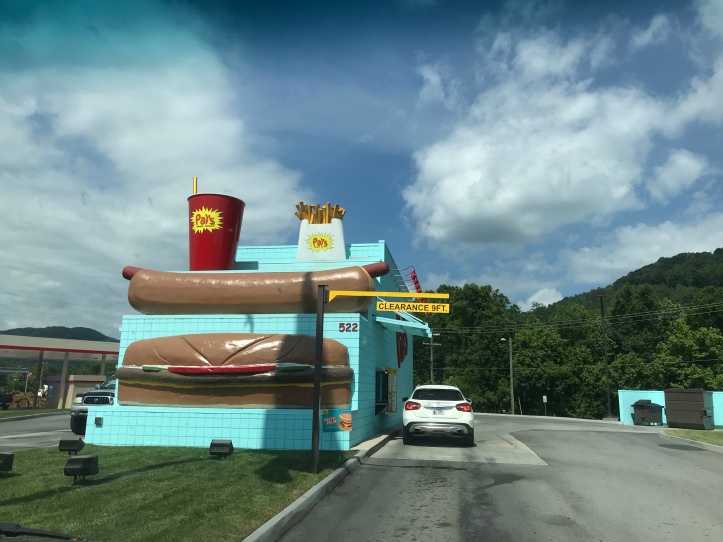 We got back a little before noon. then, in an effort to not obsess over how my ankle will heal (or not), I went into blogging mode with my foot elevated and periodically icing for 15 minutes at a time. I only surfaced for a visit from Runa, to have a short phone call with Oakland, and to test my tent stakes out on the hammock gravel area (more on that in a bit). Runa decided to come to the hostel for lunch and to check on me which was very kind of her. I walked down to the main building right as she pulled in with Sara. She heated up a pizza and drank a coke while we caught up on trail life a bit and then talked about real life things for a little while.

Runa left around 2:30 and back to blogging I went. I sat on the back porch, scratched new bug bites, which is sad because my legs were just starting to get better, and tapped away on my tiny screen. The pictures uploaded much faster outside and I would much rather be outside, so I lived on the porch for awhile. 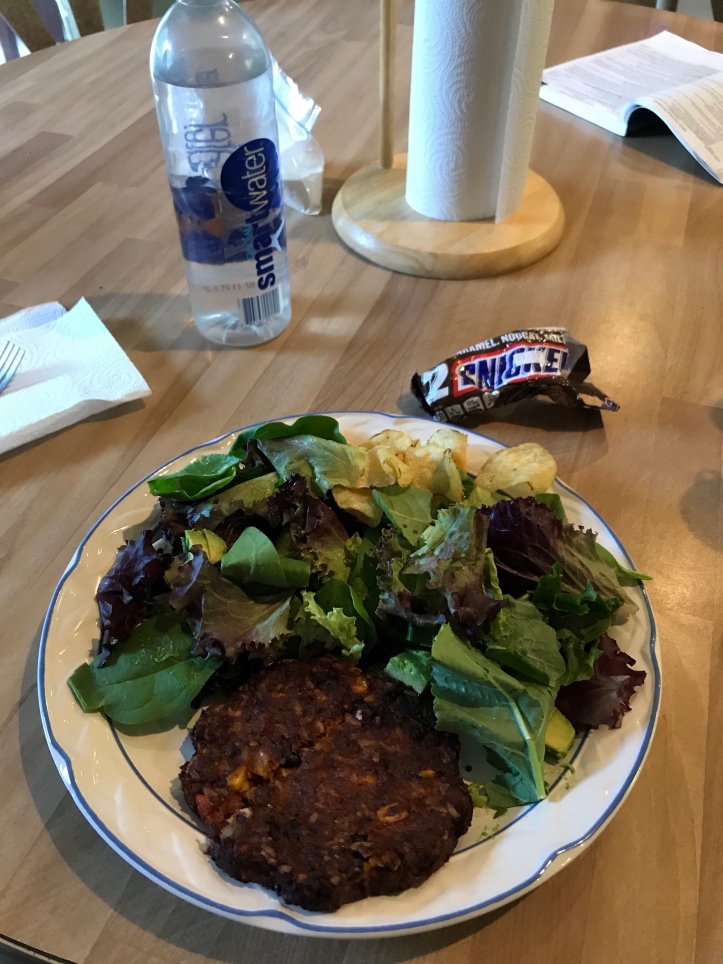 Around 6, I made myself a giant plate of greens with half an avocado and a few chips. I brought that down to the main building with Rosie’s salad and a bit of snickers for dessert. Rosie was finally back from her 13 mile day and she was overjoyed to see her salad. I offered her the other half of my avocado which she gladly accepted. I heated up a veggie burger from the freezer stash and ate that with my salad. It ALMOST felt like a real dinner. The only thing missing were raisins and olive oil for the salad.

I talked to the handful of other hikers who had all been there the night before. I think nature’s inn does a fair amount of slack packing. Or maybe I just caught a glut of slack packers coming through.

After dinner, I went back to my room to organize my day pack and my full time pack. Tomorrow I’m going to switch over to tenting to save money for however long I’m going to be here. The room is too expensive to stay in the whole time and I would rather sleep outside than in a stuffy bunk room, so I’m going to try to set my tent up in the hammocking area. Rosie set her tent up there and it seems nice and flat. The only downside is the gravel covering the ground. I’ve asked to borrow a tarp because I don’t carry a ground cover for my tent. I tried my stakes out to see if they would reach dirt underneath the gravel and I think it will work. It won’t be the best pitch ever but it’s a covered area so that shouldn’t matter much.

Creature feature: that adorable cattle dog, a dog that I thought was a stray but is a neighbor’s dog, and a couple of cardinals