Thus began a very untethered period of time in which I woke up in Brattleboro, VT, on August 14, 2017, and boarded a 1pm train to NYC that afternoon. I spent part of the morning calling orthopedic surgeon offices to make an appointment and part of the morning walking with Cotton in a nearby state forest because the thought of sitting inside all morning to then sit on a train for hours to then enter the fray of Grand Central Station seemed abominable.

I don’t think I’ve mentioned it yet, but as soon as I shared the news of my broken elbow, my ex-partner kindly offered to let me stay with them* in their apartment while I figured out my next steps, so my destination that day was an apartment full of animals that I sorely missed and a social situation that I was apprehensive about. Per the usual, our ability to co-exist trumped whatever old (and new) hostilities buzzed between us. It was disorienting to be back in the same apartment with all the same creatures, but I was very happy to get to see this face on a daily basis:

The orthopedic surgeon decided that, based on the anatomic alignment of the break, I did not imminently need surgery. He wanted to monitor the healing process and see me in a couple of weeks. Thus began the interminable “wait and see” period of about 4 months (although I didn’t know it would be that long at the time). I continued to check in with the doctor every 2-4 weeks, and he continued to say “looks good, let’s keep checking just in case you actually do need surgery.” I was both relieved at the decision to not have surgery and incredibly anxious about the possibility of a surgery looming in my future. As previously mentioned, I intended to try to restart my hike as soon as possible and continue until the weather became too cold. Foolish, I know, but I was in the full grip of the trail at that point and the idea of stopping didn’t make any sense. If surgery would lead to a faster and more concrete healing time, I didn’t like the idea of delaying it. BUT surgery would have been a much more involved and painful healing process, so I was grateful to skip that ordeal.

(extending my arm to do this was a questionable idea)

Then what? I saw friends that I had missed all summer. I went to the Brooklyn Botanic Garden and for walks in Prospect Park (extending my arm for the picture on the right was a painful and questionable idea), I went on a birthday ferry ride to Brighton Beach at sunset, and soaked up as much time with my dog as I could. 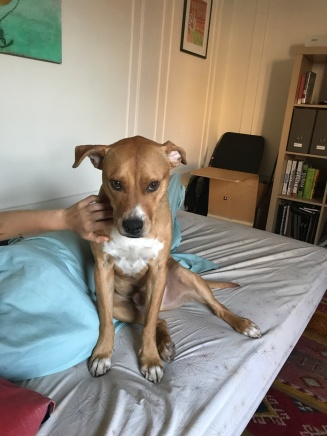 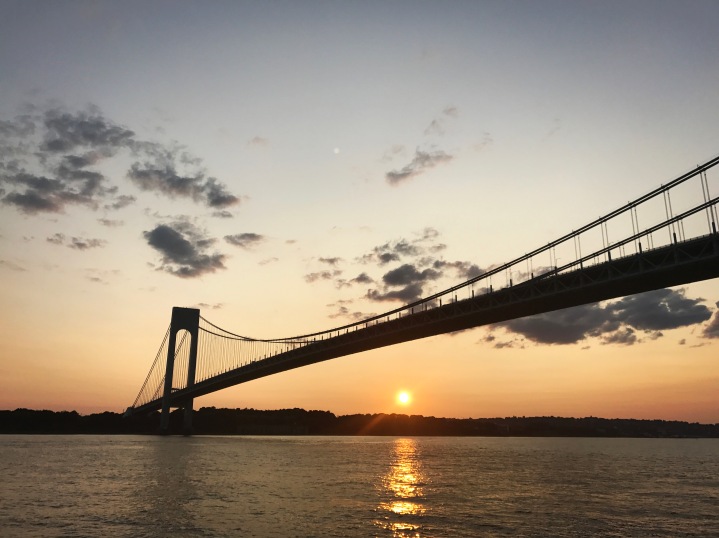 I cried a lot (shocking, I know), and I was generally floundering while making every attempt to keep my emotional self above water with the people that I loved.

I also flew to CA twice in the span of two weeks, the explanation for which requires a bit of context. The day that I broke my elbow, I mentioned having texted with a “music friend.” This friend and I attend the same old time music camp in Swannanoa, NC. In 2017, I threw myself at said friend and she, thankfully, decided to catch me. We tentatively began a long distance relationship after music camp, with no real sense of how to manage the future because of the great Uncertainty that came with our geography at the time: Oakland, CA and The Woods, East Coast. And then I broke my arm (I get a lot of mileage out of that sentence). 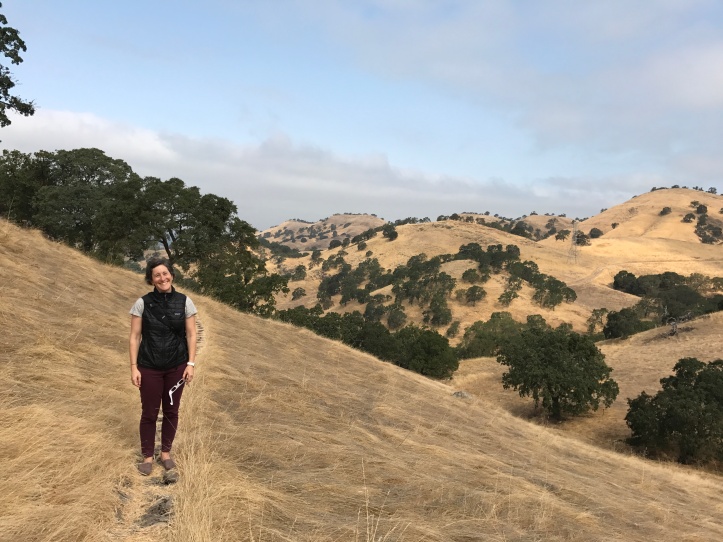 Important sidenote: this “music friend” (pictured above) now has the trail name “Oakland,” which I shall use from this point forward. I dubbed her “Oakland” in part because she self-proclaims to “bleed green and gold” and because when we’re out hiking together, it’s fun to say “let’s go, Oakland,” because it harkens to her favorite past time and is descriptive for what is happening in the moment.

So, back in August of 2017, when I was convalescing in a space that had its complications, I decided that it didn’t make sense for me to wait around in Brooklyn when I could be waiting around in the much desired company of Oakland. Off to the east bay I went, with my arm in a sling and a small collection of possessions on my back. Oakland likes to make fun of how the majority of the contents of that bag were actually coffee-making equipment. I’d gotten pretty used to wearing the same clothes over and over again, and traveling with one working arm did not lend itself to carrying a cumbersome amount of stuff. So I packed lightly!

In between those two CA trips, I went back to the orthopedic surgeon for another x-ray. The doctor decided it was time to remove my splint, which felt far too soon for me because it left me with a wobbly and unprotected still-broken arm. I was given the instructions to not pick up anything heavier than a pencil and to move my elbow, “but not too much!” because I could cause the alignment to change and that could lead to surgery. When I asked the doctor how I would know if I had moved it too much, he said, “you won’t!” He then proceeded to tell me that some patients come back to him and think they’ve definitely caused a misalignment when they haven’t, and other patients think they’re doing great when in reality their bones have shifted. Perfect! More uncertainty! My favorite! With a side bonus of more pain because moving my arm hurt. Hell, NOT moving my arm hurt.

All the while, thoughts of the trail continued to fester. For reasons that are too convoluted to explain, my CA flight took me to VA where my mom and stepdad live (otherwise known as HQ! they sent me all of my regularly scheduled mail drops in 2017 and will be supply masters again this year). I decided that when I got back to VA after my labor day trip to CA, I would see if I could set up my tent with one arm. My mom, ever the encourager of hair-brained schemes, watched the experiment with a clear desire to jump it at a moment’s notice. As it turns out, a Zpacks Duplex tent is not impossible to set up with 1.05 arms (.05 = using my left hand as a whisper of stabilization for the trickier parts).

For whatever reason, the tent setup had been my mental bottom line. If I could do that, everything else would be fine. Little did I know how impossible it would be to hang my food…

*”they/them” is not a typo. my ex-partner uses gender neutral pronouns. I also use gender neutral pronouns, so this is likely a topic that will come up again as I navigate the predominantly straight and binary space of the AT. If this concept is confusing, I recommend doing some reading. If it’s repugnant, I ask that you consider a reality outside of your own and get curious about it. If that’s too much to ask, then go find the little “x” button in your browser that closes this page and be on your way.