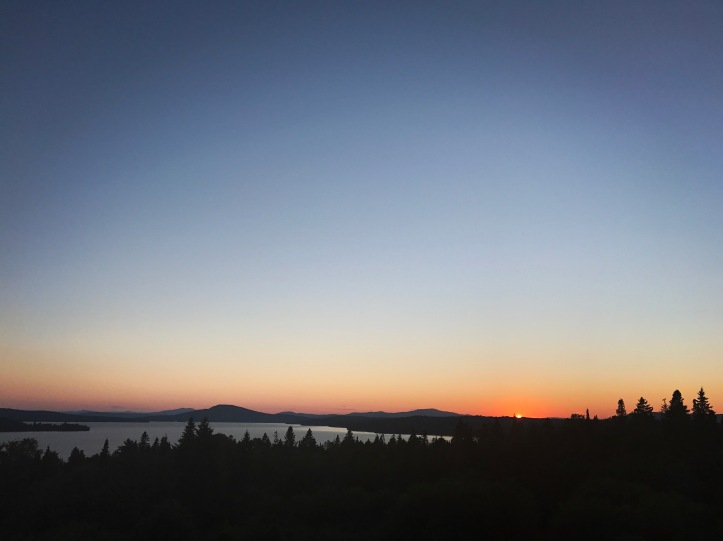 **In an effort to get the remainder of the Maine posts published, I’m going to gloss over the zero day I took in Rangeley**

As previously mentioned, I got in bed on the late side. Not long after I plugged in my phone and settled in to the sound of snoring, I heard footsteps coming up the stairwell. I assumed it was a hiker heading to the one bathroom in the building, but as the footsteps got closer, I heard a sloppy male voice muttering about which bed might be his. Then I felt a searching hand pat my feet. I said, “dude” with a clear “get the F off of me” tone of voice, and the slurring human apologized profusely and muttered something about going to sleep somewhere else. I felt confused and aggravated, but satisfied that the roaming hiker wouldn’t return. The voice sounded like it belonged to the odd gentleman I’d met the day before who I felt deserved a wide berth.

It became clear during breakfast that the events of the night had caused quite a stir in the bunkhouse. Somehow the story got back to the owners of the farmhouse, who were not happy in the least. I passed it off as the mistake of a drunk hiker who relented with little urging from me. When he saw me in the morning, he apologized to the point of awkwardness. As I rummaged about in the packroom a little while later, I overheard one of the managers discussing his strategy to ask the hiker to move on (a sugarcoated way of saying he planned to kick him out of the inn). One of the front desk staff came through the bunkhouse taking roll and checking the number of people booked for the hostel against the number of available beds. As it turns out, the inn had overbooked the building and the bed had indeed belonged to the muttering hiker, hence the missing towel upon my arrival. I hadn’t seen any other belongings, so both the staff member and I had assumed the towel indicated a stocking oversight. The inn apologized to the hiker and assigned him to a proper bed for the next night so that he could take his planned zero day. The true source of the mistake did not prevent the hiker from continuing to apologize to me every time we crossed paths throughout the day. So awkward.

The remainder of the day passed unremarkably. I managed to get some blogging done. I worked out a plan for Cotton to join me for a long weekend beginning Friday morning with the Bigelows and ending Monday with the Kennebec ferry crossing into Caratunk. I’m excited to have her company again.

I went into town in the middle of the day because the weather was far better than anticipated, which made me cranky at having lost another day of decent hiking even though I had far more internet/phone work than I could get through in one day. I ran into tater and norseman at the diner style bagel shop in town. They had spent a good chunk of the morning working on the house puzzle, which they finished save the missing piece.

We parted ways after their success, and I bought a few postcards from a clothing store down the street. Then I sat by the waterfront writing letters and eating doritos while being stalked by a belligerent seagull. I dropped the postcards in the box outside the post office, and made my way to the ice cream shop that serves as a pickup location for the hostel. Predictably, I couldn’t resist getting some ice cream while I waited, which of course made me feel happy and moderately sick to my stomach.

I spent the rest of the afternoon editing posts, organizing my food, and making phone calls to work out logistics for the hundred mile wilderness. I managed to plan out the rest of Maine, estimating a katahdin summit on August 24th. I happened to look up during my planning fugue to notice the sky changing colors. I quickly put on my shoes and ran up the side of the road to the scenic overlook about a half mile away from the inn. The change in pace made my lungs burn as I jogged up the hill. I got there just as the sun dropped below the ridge line of the mountains west of Rangeley Lake (top picture for today). I stuck around for a few minutes ogling a high strung but friendly pitbull and then headed back to the hostel to finish prepping for tomorrow. I spent the late hours of the evening on the phone while the rest of the hikers goofed off around the fire pit. Tomorrow’s adventure: the Saddleback range.

Creature feature: that cute dog at the overlook and the sound of loons on the lake.