I woke up around 530 feeling sluggish. It was hard to get out of bed after yesterday’s marathon. The air felt brisk as I grabbed my trowel and toilet paper and hung out with the ferns for a bit. I retrieved my food bag from its mediocre hang and ate breakfast in my tent. There’s only about a tablespoon of peanut butter left in my jar. I was packed and ready to roll by 7. As I walked towards the stream, I had the feeling of never actually stopping last night because of such a late arrival and setting out before the handful of other hikers tented in the area.

The stream required a somewhat tricky rock hop wherein the toe box on my right shoe got doused. Once I reached the far bank, I forced myself to stop and filter more water since I didn’t have full bottles. I’ve gotten so picky about how much water I feel like carrying, and it’s affecting how much I drink.
The trail then crossed over several strange rock beds and went through hardwoods on a gradual incline. My stomach didn’t feel good, so I made a second trip to convene with nature when I found an out of the way spot while crossing a woods road. Sometimes I wonder why I include these details. You probably do too, but it’s all part of the experience, so in it stays. 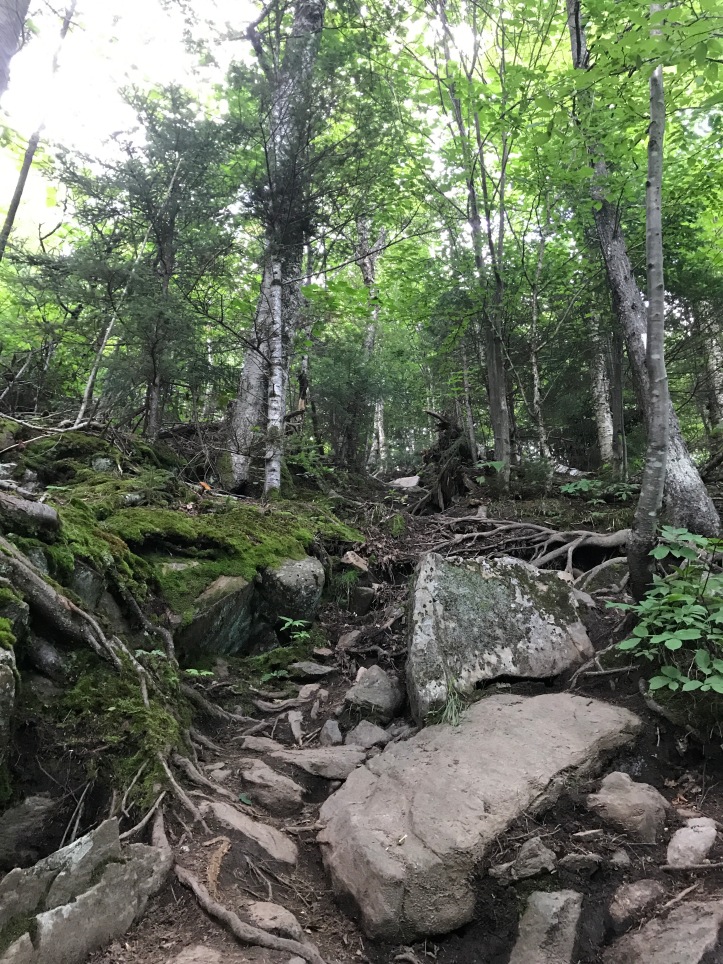 After my pitstop, the trail climbed toward route 17. I couldn’t shake the sluggish feeling as I picked my way over roots and awkwardly spaced boulders. The woods eventually opened up to a grassy hillside and stone steps where I found this cooler and a Tupperware with pretzels and KitKats and A BANANA.

I’m low on lunch food and feeling worn down, so the surprise supplies were a huge pick me up. I grabbed two kitkats, a sizable handful of pretzel sticks and the banana. I signed the log with a gracious thank you and made my way up to the road where I sat on a bench to eat my banana and take in the view from today’s top picture.

After twenty minutes of dawdling, I crossed the road and slogged through a short climb onto a mostly flat section with small rolling hills. As I walked along zoning out, a buzzing creature pelted my face. My cheek erupted in blazing pain as I swatted at what I assumed was a bee. I brushed it away and proceeded to curse to the trees in disbelief. I haven’t been stung by a bee in about 20 years. Thanks, Maine. Way to turn a pleasant stretch of trail into a punch in the face. I held one of my water bottles up against the sting and kept walking because what else was there to do.

The rest of the morning passed without note. The trail wound through hardwoods past several ponds. Sodden coils of birch bark lay strewn on the forest floor like rumpled table runners. The footing vacillated between densely packed roots and short stretches of mud with little change in elevation save a few brief, rocky hills such as this:

A strong breeze rustled the trees making it sound as if I was surrounded by a distant waterfall. I saw a smattering of southbound hikers, but I didn’t put effort into talking to anyone.

I heard the waves crashing against the shore of Long pond well before I could see the water. I walked through a break in the brush and stood on the beach admiring the deep blue of the lake. Sadly the wind made it too cold to stick around for long. I continued on towards sabbath day pond lean to (as the shelters are called in Maine for whatever reason). A handful of older folks sat near the spur trail to the shelter. Their gear was nowhere to be seen, which made me wonder if they were camped at the pond for the day or perhaps getting a late start. Once again, I had little desire to engage, so I merely replied hello to one of the women who greeted me and kept moving. I walked to the sound of water lapping against roots as the trail skirted the pond for a little while. I looked up right as a loon landed in the middle of the pond and proceeded to make short, yipping interjections to a couple of other loons already in the water. The cool air reminded me of early October mornings in prospect park with my dog.

There was a long, gradual climb away from Sabbath pond. My legs protested at first, telling me they were tired from yesterday, but they soon settled in and did what I asked of them. A breeze flowed through treetops, periodically dipping low enough for me to feel the air rustle my hair. I walked along listening to fiddle tunes and appreciating the mild weather. At one point, I looked up to find a young grouse on a bog board about 10 yards in front of me. It twittered quietly and crossed into the moss next to the path. Here’s a mediocre picture that I managed to get once the surprise of seeing the bird wore off: 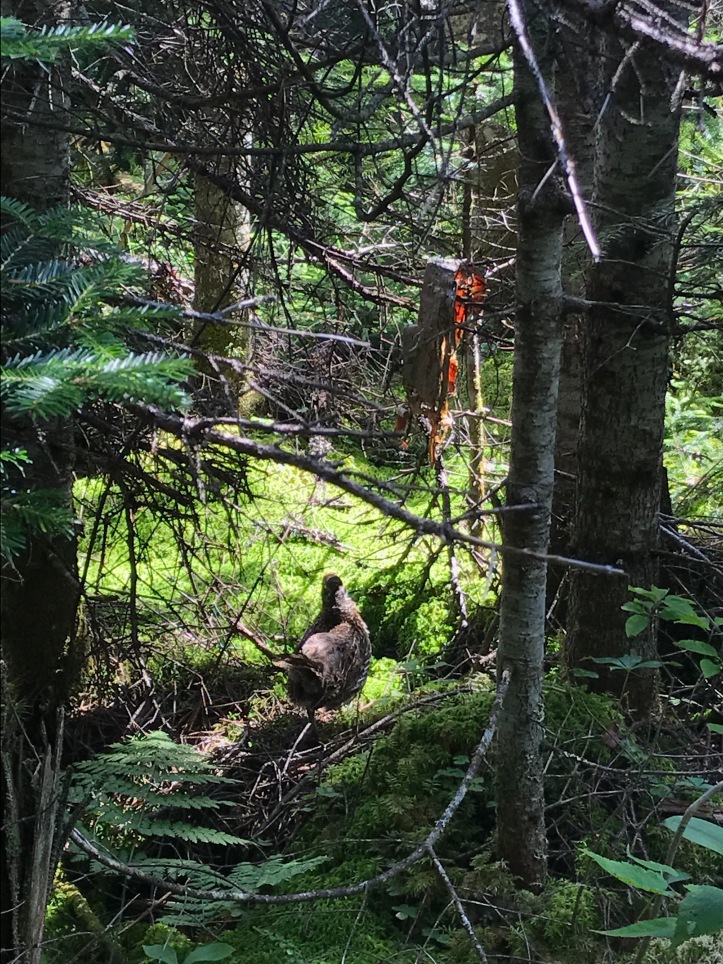 I stood watching it meander away, unperturbed by my presence. Then I noticed a second grouse a little to my left. I watched them wander off into the brush, periodically nipping at the ground.

The trail was dotted with annoying muddy sections that gave to roots and more roots. Around 2p, I came to a stream where I forced myself to fill up on water. My energy level continued to wane, so I extended the break long enough to eat the other kitkat in my hip pocket, hoping the sugar might do more than give me a headache.

About a half mile later, the trail began to climb. I came to what I assumed was the best place to make a phone call before I lost elevation again. To my surprise, the woman at the hostel was able to hear me as I asked about a pick-up from the trailhead. I was also surprised that she had no record of the reservation my mom had made for me, but there were thankfully enough rooms to accommodate my request.

The last mile and a half to the road are a rushed blur. I was worried about missing my ride or making them wait too long, so I kicked into “speed” hiking gear wherever the trail would allow. I stoppped long enough to admire this view and continued down the neverending descent:

I could hear the road way far below me and felt dismayed by how much elevation I still had to drop. The trail eventually flattened out and led me to a final stream crossing just before the gravel parking lot. As I hopped onto the opposite bank of the stream, a sinewy fellow in his early fifties wearing street clothes walked towards me. He looked more like he had plans to crack open a beer than hike. As I got closer to him, he said “are you my shuttle?” to which I replied, “I guess so!” He greeted me with a fist bump and announced his name to be Mississippi. I threw my pack into the back of his truck and piled into the front seat thinking once again that this is an example of the “odd and trusting place” my friend described the AT to be. As we headed towards the Farmhouse Inn, Mississippi regaled me with tales of his own thru hike, all the while weaving over every line on his side of the road. The radio station played a mixture of static and classic rock, which he turned up at one point, thus forcing himself to yell over crackling hiss of poor reception. I have a hard time with competing noises and was close to asking him to turn it down when he did it of his own accord. After a very long 10 minutes in the car, we pulled up to a beautiful estate house with expansive grounds with a newly constructed events barn, a smaller carriage house, and a pigpen that I never did make it around to visiting.
Mississippi kindly rejected my offer to pay him a tip and showed me to the reception desk. Muggle guests arrived at the same time I did, and the clerk on duty tended to them first. Grubby hiker hierarchy at play once again. I sat on the bench and watched Mississippi wander in and out of the main house as I drank the Gatorade he had goaded me into accepting. The clerk eventually came back and showed me to the pack room, which stood on the opposite side of the building as the hiker hostel. I understand why owners are wary of hiker packs, but it’s really inconvenient to be separated from what amounts to my home. I can’t count the number of times I had to travel between the bunkhouse and the pack room, checklist be damned. When the clerk showed me to the beds upstairs, she noted that one of the available beds had a towel missing. I happened to choose that bed for the night because it was tucked against the wall, which felt mildly more private. Little did I know the towel was missing for a reason, but I’ll save that story for tomorrow’s post. I settled in as best I could and took a much needed shower. A chatty SOBO camped out on his bed watching videos on his phone kept talking to me as I tried to organize the notes for today’s post. I finally had to leave the room in order to concentrate. On my way out, I met a few of the other hikers, one of whom sounded as if he was slurring his words and was in the process of making a gigantic chicken patty sandwich in the microwave. I gave him a wide berth and camped out on the bench outside the pack room. The weather for tomorrow is somewhat questionable and the terrain involves an exposed traverse of Saddleback, the Horn, and Saddleback Junior. It seems early for a zero, but I’m tempted to wait out the weather and get some much needed logistics and blog work out of the way. I took the shuttle ride to the grocery store rather than into town because I felt too overwhelmed by the idea of getting stuck in town until 730. Instead, I bought a bag of salad, avocado, and a package of sausage for dinner and a bag of chips to round out my current snacks. I ate dinner with a woman named Bangles, whom I met many weeks ago, but didn’t recognize. When she heard my name, she realized that she knew me. We traced ourselves back to Wawayanda shelter in NJ, and played catch-up on the people we know in common. Tater and Norsemen arrived sometime in the late evening, but I didn’t spend any time socializing with them because I had my head in my phone until I crawled into bed well past midnight… or what I thought was my bed…

Creature feature: the grouse and a handful of frogs

**Forgive the slow meting out of posts. It continues to be really difficult to look through hiking pictures before my fall, but I promise I’ll catch up with myself soon.**