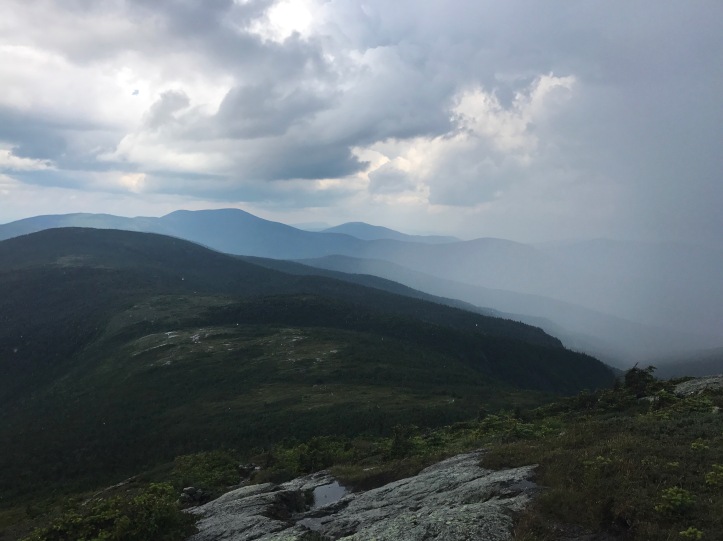 **As those of you on my social media may already know, I’m off trail at the moment because I fractured my left elbow in central Maine. I’m going to post the preceding days of hiking as usual before I write about the incident that has me sitting in Brooklyn in front of my laptop with a half splint (for now) and a heavy heart.**

I woke up around 530 and put on my glasses to check out this view from the shelter: 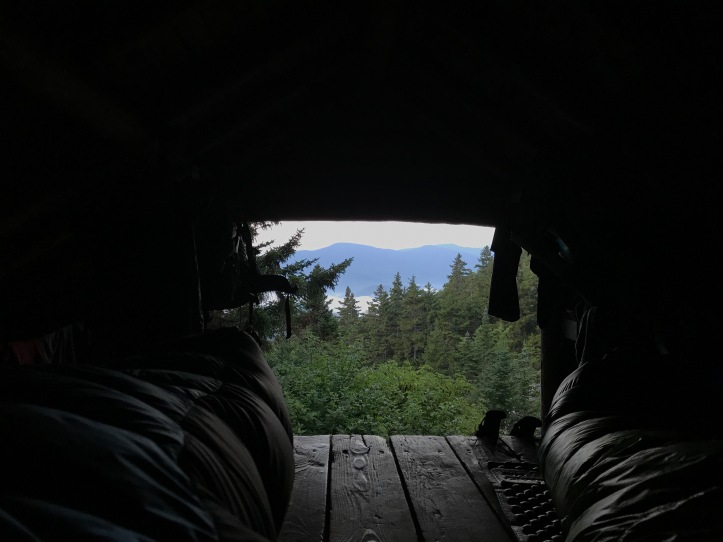 The mosquitoes weren’t terrible last night, but I got a bite on my arm that made me wary of sticking my legs out of my sleeping bag. I tossed and turned for a lot of the night because of the heat. Did a little calf massage and changed my shorts before I hopped down from the loft and walked to the privy. By the time I got back, most people were stirring. I ate breakfast sitting on a rock at the edge of the shelter, filtering water in between bites. My appetite is still kind of wonky, so I had to force my way through breakfast.
I was packed up and walking towards the trail around 645. Took a quick duck down to the pond to see if the moose had returned, but no dice. The morning started with a steep climb that had me drenched in a matter of minutes. I came to a small stream about a mile after the shelter. The water stops are few and far between today, so I gave in and filtered an extra liter. As I stooped over my water bottle squeezing my sawyer bag, the rest of the crew from the shelter trickled in. Everyone stopped to fill up and collectively whined about the water situation. I left them griping and made my way up the next steep climb towards the summit of Mount Success. It seemed as if it would be a mile of boulder scrambling, but it flattened out to periodic bog boards and mildly rocky footing before the final boulder scramble to get to the summit. The trail was set a bit lower than the trees with an abundance of moss that reminded me of the whites and the higher peaks of MA and VT.

Halfway up the climb, I turned to see this view: 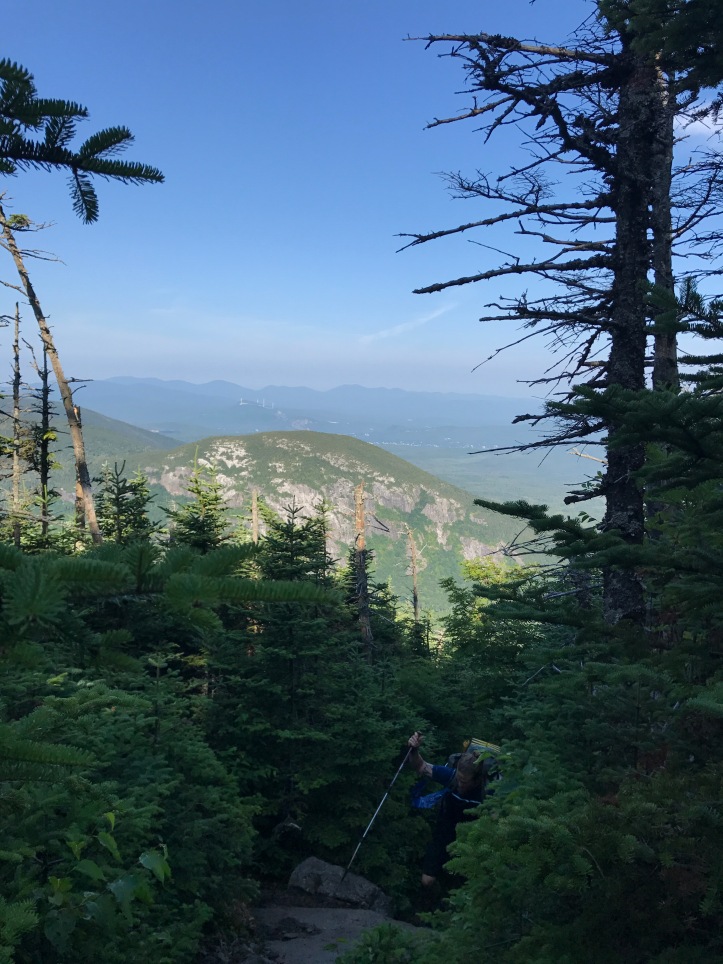 The NOBO named first aid passed me, and we whined about the false summit a little ways back. I complained about the prospect of another mile of climbing, but first aid seemed to think we were nearly at the top. I didn’t have the heart to tell him he was wrong because I’d just checked the mileage on my phone. I got to the summit and found first aid with Olive, another one of his NOBO friends. 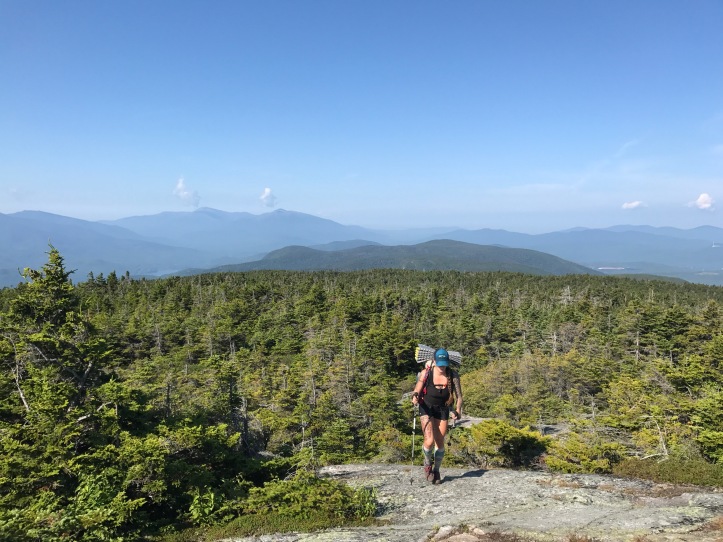 Hawaii showed up a few minutes later. They all sat around eating chips while I posted a few pictures from last night. I continued to be a phone zombie with a beautiful view in the background while they collected themselves and got moving. 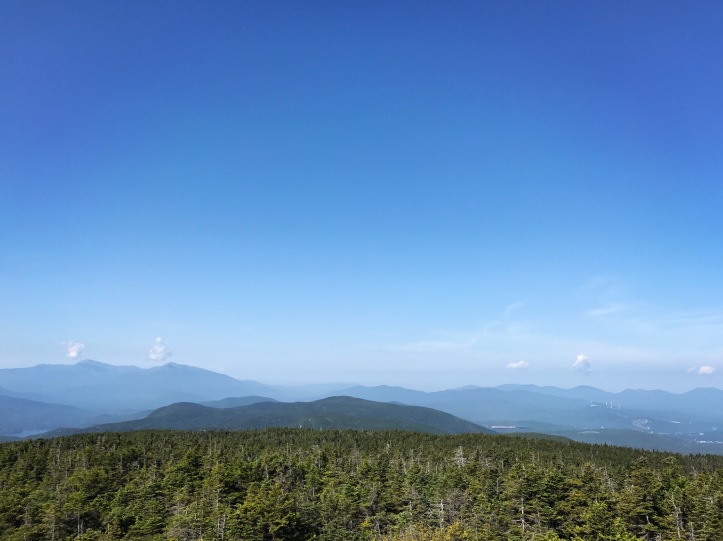 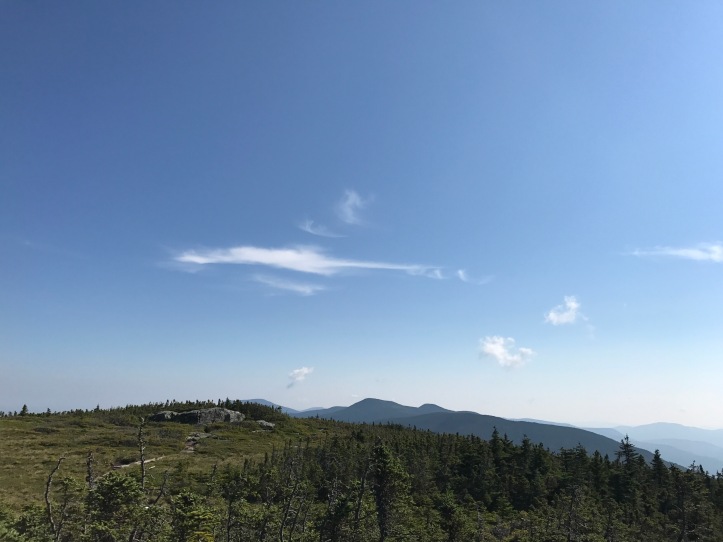 The trail climbed a bit more then flattened out to bog boards with little white scraggly flowers popping out of thick clumps of grass. 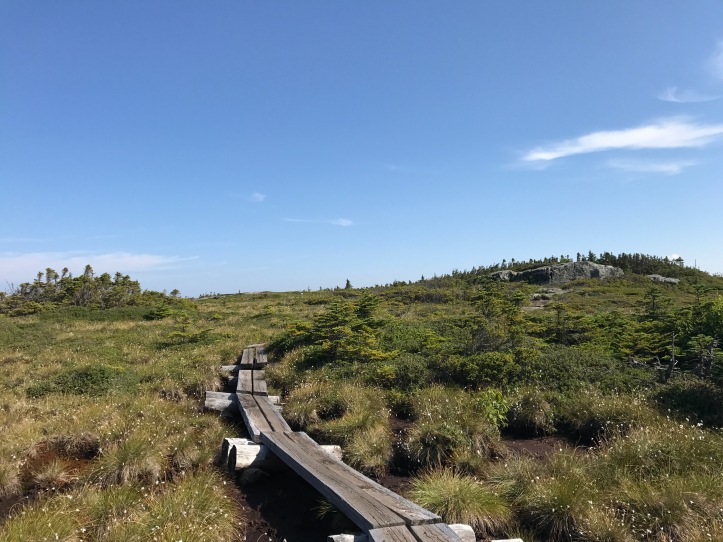 Then came the first of many steep descents, one of which consisted of jagged boulders the size of smart cars arranged in odd angles that were not conducive to my center of gravity. 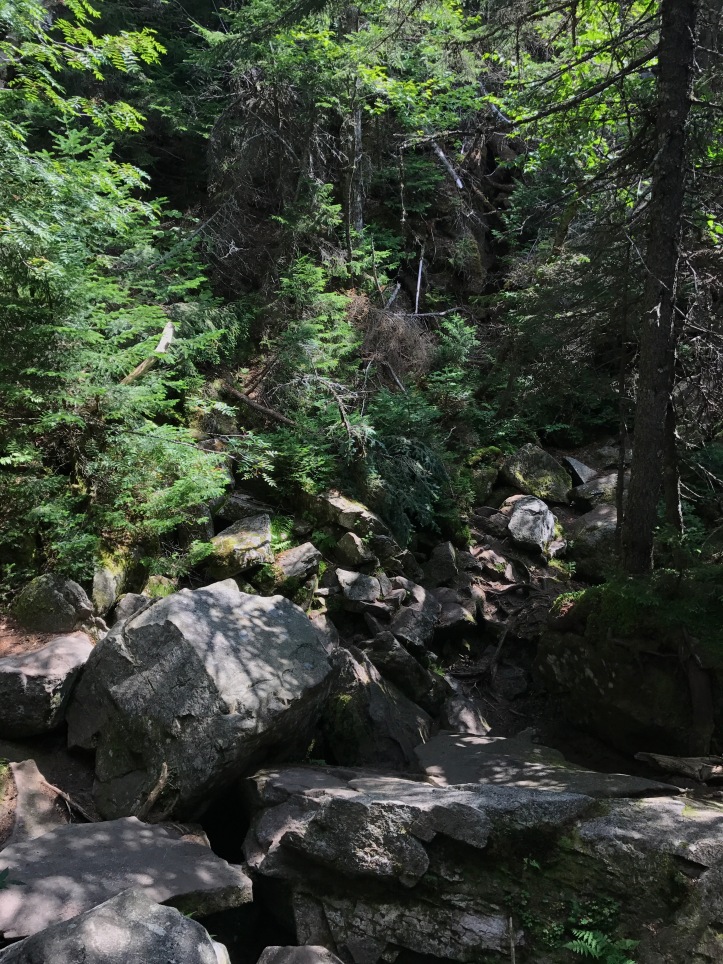 It was the first of many butt scooches for the day and felt like a prelude to the notch (aka mahoosuc notch, which is dubbed the longest mile on the AT because you have to traverse a crazy boulder field at glacial speeds).
As I went down one of many steep boulder faces, a knife-like pain shot through my right Achilles’ tendon and my foot gave out a little. It happened again on the next step. When I got to the bottom of the boulder, I stretched my calf and tried not to freak out because it felt hard to put all of my weight down. It happened again on the next boulder, so when I got to a flat spot, I decided to stop for lunch. I wasn’t really hungry, but it seemed wise to give my leg a few minutes of rest. I watched small sparrow-like birds chatter and jump from branch to branch as I ate my wrap (no need to specify; you likely know the contents by now). I’m sad that I didn’t pack out any chips, especially after watching the NOBOs sit around with their giant bags this morning. My Achilles’ tendon felt better after the rest, which is good because I had a long afternoon of scaling boulders in my future (not that I knew it at the time). 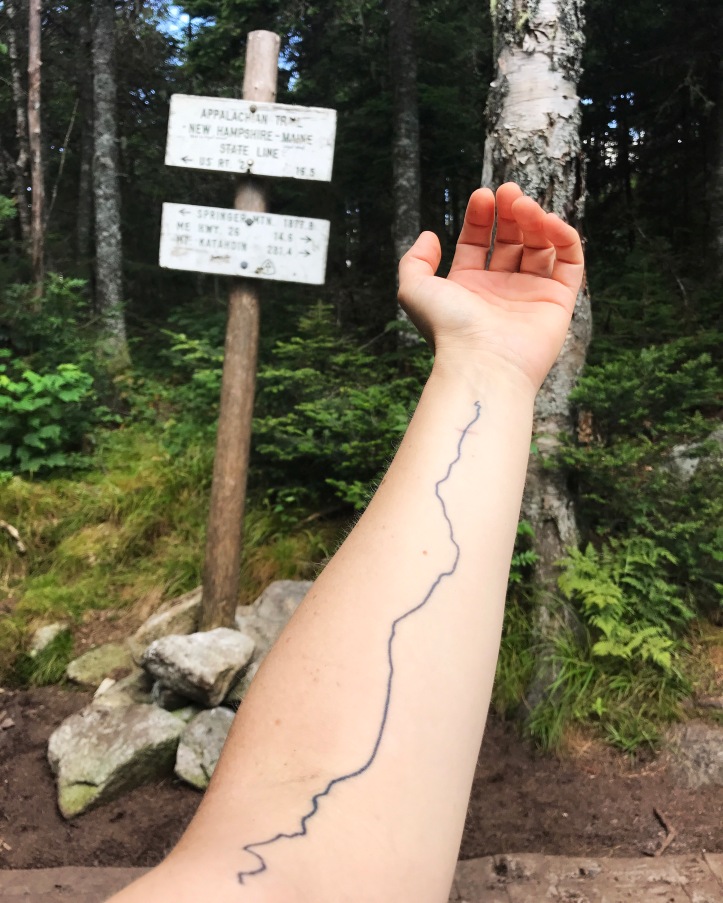 I ran into the cluster of NOBOs again at the Maine border where they asked me to take their boomerang dance video to commemorate crossing into their last state. I lingered after their departure and ate a snack to the sound of dragonflies popping around me. The trail was reasonable for a about five minutes until I popped out to this view that was followed by descending the giant boulders in the second picture. 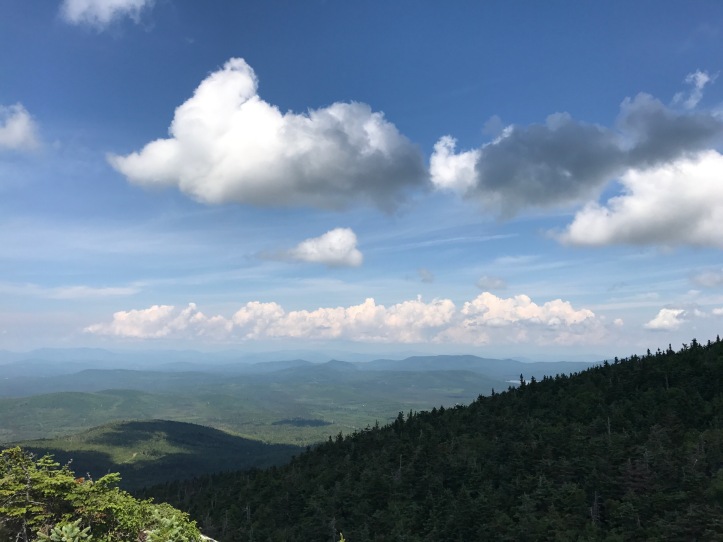 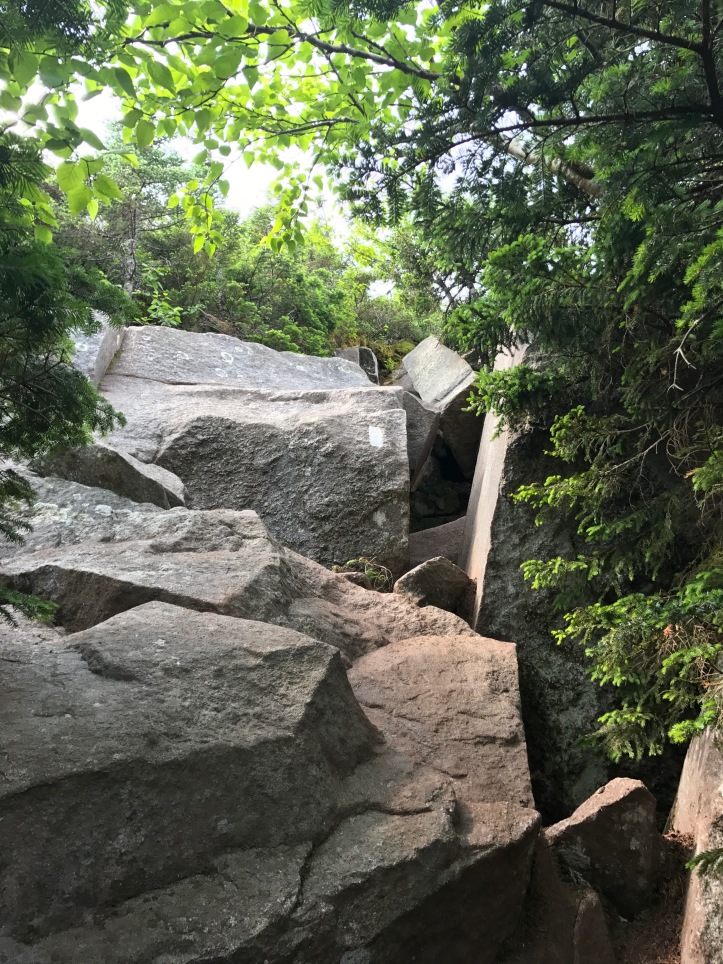 Then came the goose eyes, a series of peaks by the same name that are denoted by cardinal directions. The first goose eye (west) passed unremarkably. There were steep sections that definitely fell in the realm of rock climbing, but the whites have worn off the shock of looking up to find 20 foot boulders as the “trail.” As I made my way towards the peak of east goose eye, things got a little more interesting than I care for, but the views were incredible (hopefully the video works):

​​
It started raining right as I reached this boulder face with a rebar ladder. 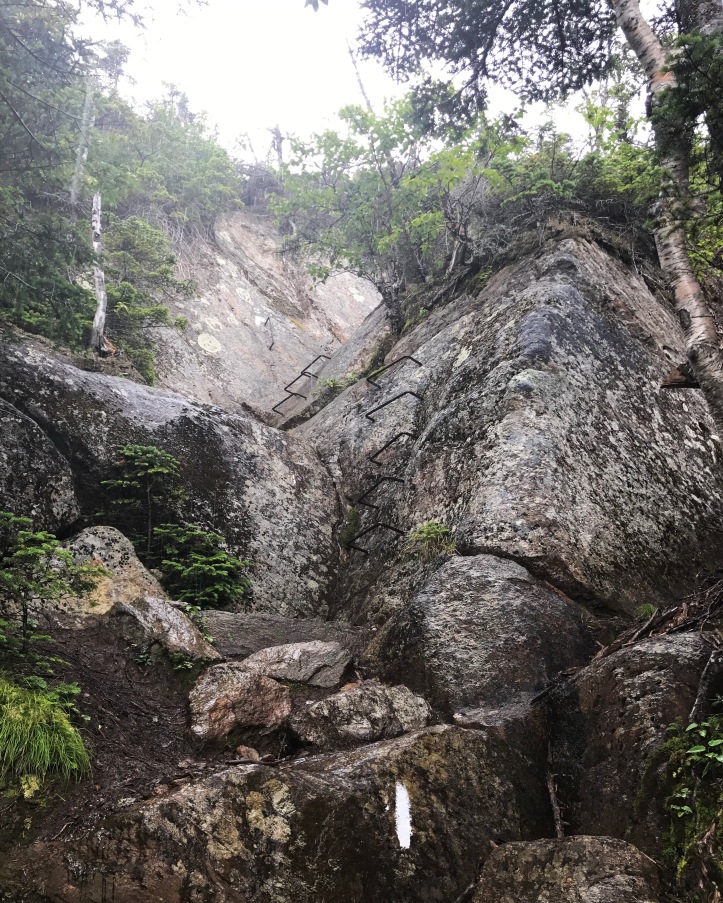 I questioned the sanity of climbing up in the rain, but I didn’t have much choice, so I stashed my poles and inched up the side of the boulder. The climb continued around the bend without the help of rebar. I reached the peak and looked at what lay ahead: goose eye North with a long exposed section (top picture).
And then it started thundering. I was surrounded by two clusters of thunderstorms, one off to my right and one behind me. It was hard to tell which direction they were headed, and I hated the idea of standing around in the rain, so I kept moving. It was slow going down endless rock faces that had me emotionally white knuckling it the entire afternoon. As I inched my way down an exposed and especially tricky boulder, a deafening clap of thunder sounded off to my right at what felt like a very uncomfortable distance. I sat there with one leg jammed against the slick corner of a rock, my arms holding my weight, no clear step within reach, and the weight of my pack threatening to propel me forward. Not exactly a place I could pick up the pace. That was one of the moments where I could see myself tumbling down the rocks. I very nearly did, but somehow managed to slip and slide my way to having both feet solidly on the ground. 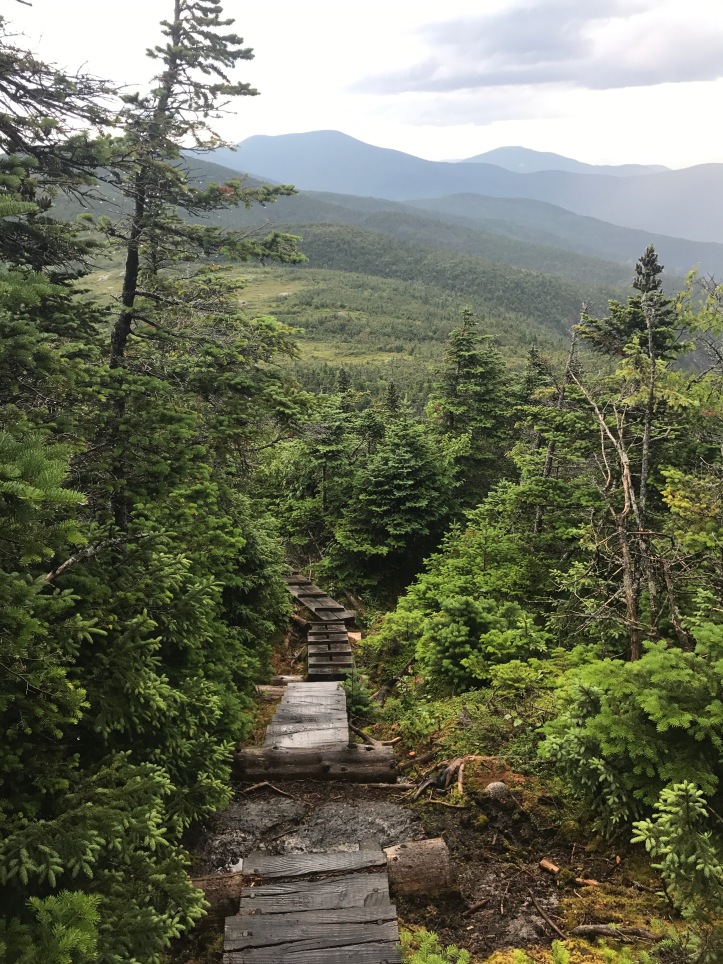 I wound my way down east goose eye, taking care not to slip on the wooden boards in place to theoretically make the descent easier. The rain slowed to a light drizzle, but the trail spit me out onto the bald just as the thunder intensified. The lack of lightning made me feel slightly less insane for crossing the bald in the storm. I made my way across the exposed section, dipping back into the trees only to be taken back out into the open repeatedly. Then came the climb up goose eye North, which also left me more exposed than I wanted as the rain picked up and the thunderstorm settled directly overhead. The descent from goose eye north was one slick boulder face after another. I wanted to sit down and give up a dozen times. I also considered the possibility of just skipping Maine altogether. I felt mentally exhausted from the constant fear of slipping down the side of rock faces like this: 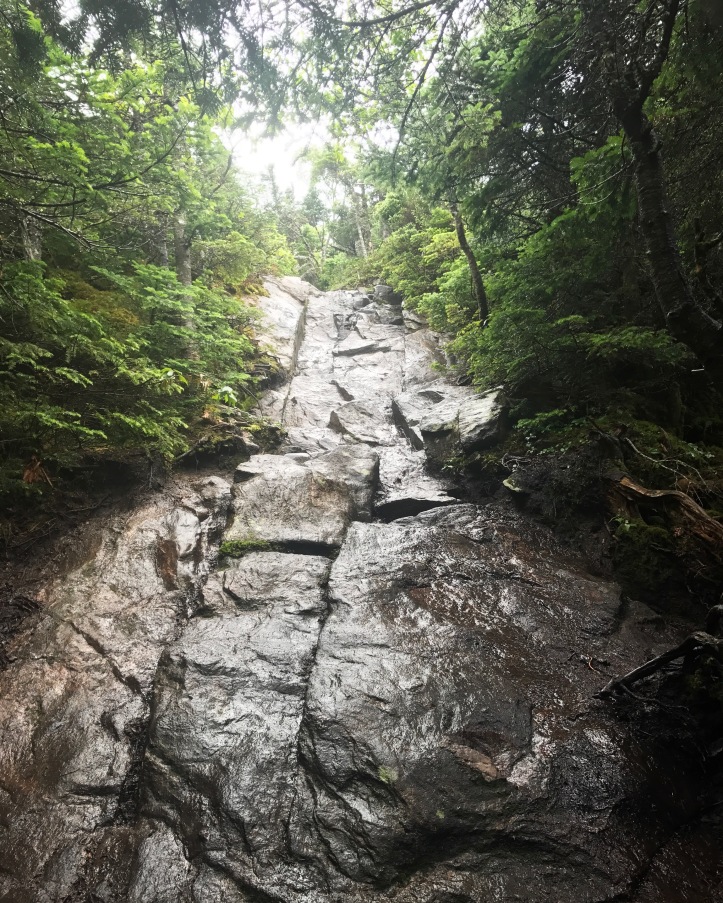 Eventually, the terrain eased up to a normal version of hard with actual rocks instead of sheets of boulders. I reached the full goose shelter around 330 and found the entire NOBO crew from last night. They had their gear spread out and someone was sweeping the shelter floor. I had hoped to see other hikers so I could navigate the decision of whether to stay or go. I had assumed they would all continue through the notch, so I was surprised to find they had stopped short. Hawaii said they’d been there for about a half hour and had just made the decision to stay. I sat on the edge of the shelter and weighed my options. I really wanted to get the notch out of the way because it’s plaguing me in much the same way moosilauke did. However, the prospect of going through it alone on a day when the boulders were likely wet and it was potentially going to rain again seemed unwise. I ate a snack and continued to dither. The idea of getting stuck in the rain alone is finally what did me in. I stood up and reached down to unhook my gaiters. Hawaii exclaimed “you calling it??” I sheepishly said yes and continued taking off my shoes. Then I set up my bed and switched into dry shorts. I added a few things to the collection of soggy clothes hanging from the trees and proceeded to loaf about for the next two hours. It poured about 90 minutes after I made the decision to stay. 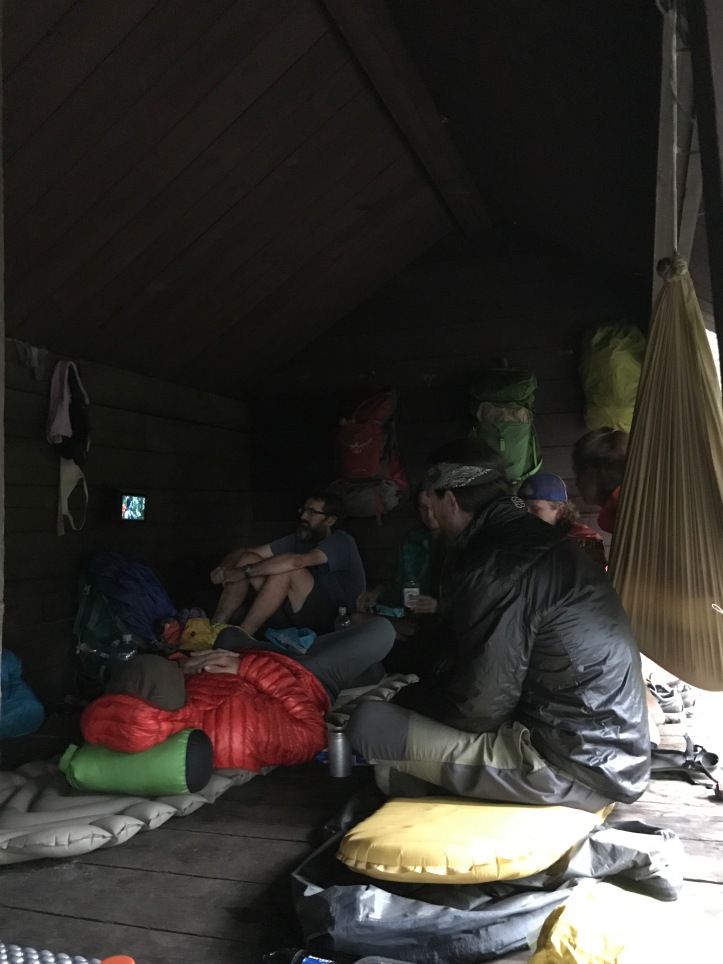 The NOBOs watched avatar and ate snacks while I lay on my sleeping pad trying to have a text conversation with a schizophrenic cell phone signal. One minute I’d have a signal good enough to receive a picture, and the next minute, I had no service whatsoever. Around 530, I boiled water and made dinner. I had somehow managed to sit around for 3 hours without eating all of my snacks. There’s definitely something wrong with my appetite.

More hikers filtered in as the afternoon wore on, and the shelter quickly filled up. There are now about 10 people inside with another 7-8 tented out back. I’m finishing this to the sound of a mustachioed hiker named Action Jackson shuffling in his sleeping bag, leftover rain dripping from the shelter eaves, and the tap of my fingers on the screen. Today was frightening and emotionally exhausting. Tomorrow comes the notch and then mahoosuc arm, which is a notoriously steep climb.
Mile 1903.3 to mile 1912.9 (9.6)
Total miles: 909.7
Creature feature: I startled something in the woods that made a short growling screech, but I didn’t lay eyes on the source, a little brown rabbit (hare?) that I’ve never seen before, and the usual bird suspects.