Day 81: in the clouds edition

It was so hard to get out of bed this morning. Thankfully the rain stopped some time in the night, but it was cold and all of my footwear was still saturated. I stiffly made my way to the privy wincing at the cold, squish of my shoes. I grabbed my food bag on the way back from the privy and ate my breakfast in my tent after I cleaned and medicated my foot. It doesn’t seem infected, but it’s still pretty sore. It took some serious will power to get ready, but I managed to be packed and heading towards the trail by 6:45. As I left, I came upon Walden heading towards my tent site. She had assumed I would be on the trail sooner and thought maybe I’d left without saying goodbye. I assured her I wouldn’t do such a thing.
We talked as we made our way towards Crawford notch through forgettable terrain. The caretaker happened to catch up to us right as I encouraged Walden to use the preferred pronoun for someone in her life who has transitioned away from their assigned pronoun. A predictably queer conversation. The caretaker slowed her pace and walked the rest of the way to the road with us. We asked her a ton of questions about work and how she structures her free time, etc. I also asked her what kind of food she packs out and felt envious of the fresh foods in her response. Somewhere along the way we both acknowledged how comforting it was to come across another visibly queer person while also lamenting the fleeting nature of the interaction.

We arrived at the parking lot near route 302 around 8:30. I loitered, eating a snack on the ground feeling not quite ready to leave the company of someone who presents in much the same way as me. But it had to happen at some point, so I said goodbye to everyone and continued down the road towards 302. 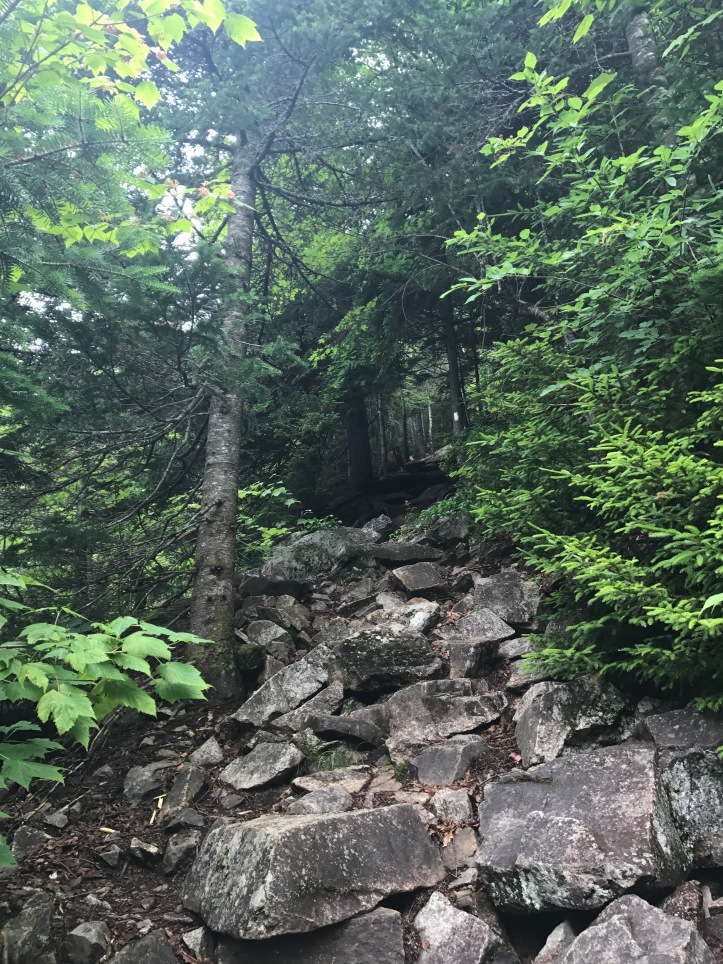 Then came the steep climb to Webster Cliffs. I felt grateful to be scrambling up the sheer boulders rather than trying to find my way down them with little footing to work with beyond the exposed roots of nearby trees (the picture is of an easier section with much more in the way of defined steps). 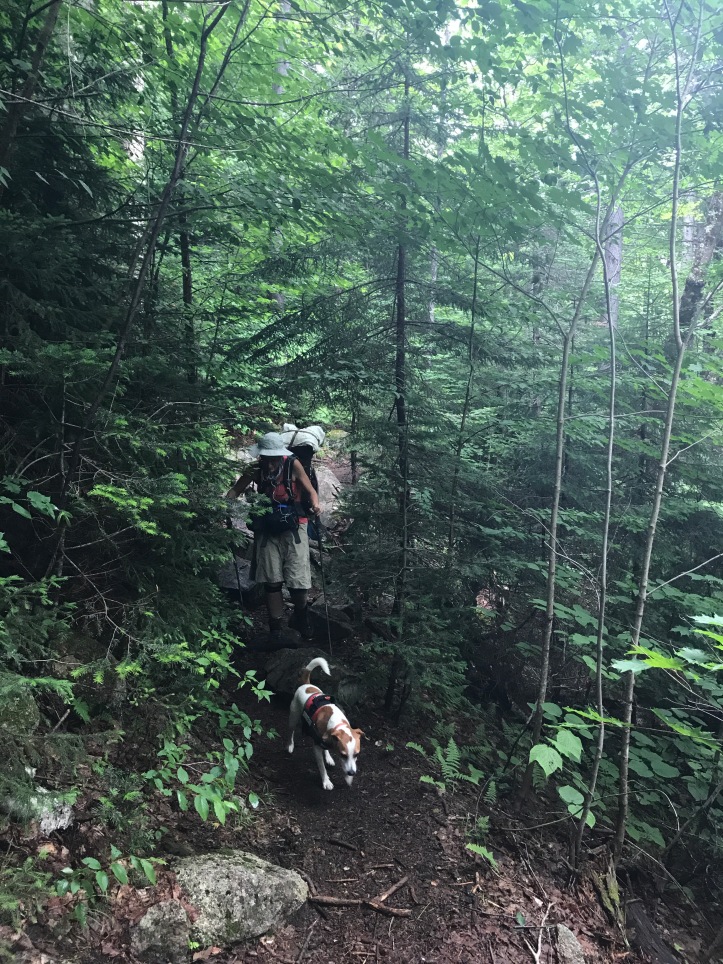 I ran into fstop and Leif on my way up, but I didn’t stick around to talk because I felt like being alone. I also ran into a SOBO whose name I can’t recall. He warned me about the difficulty of Webster. I tried to comfort myself by reminding myself that everyone has different kryptonite. What kicked his ass might not register on my oh shit radar. After a thigh burning series of climbs, I finally came to one of several views from increasingly higher cliffs on Mt Webster. Here are a few pictures from the climb along with little blueish green fir cones that I’m obsessed with. 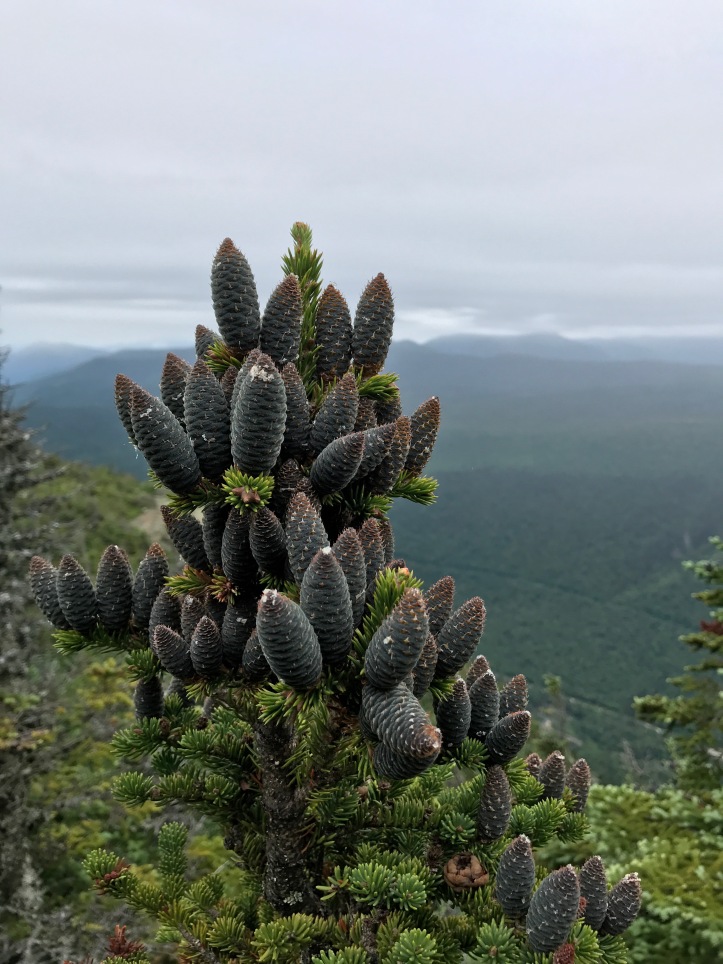 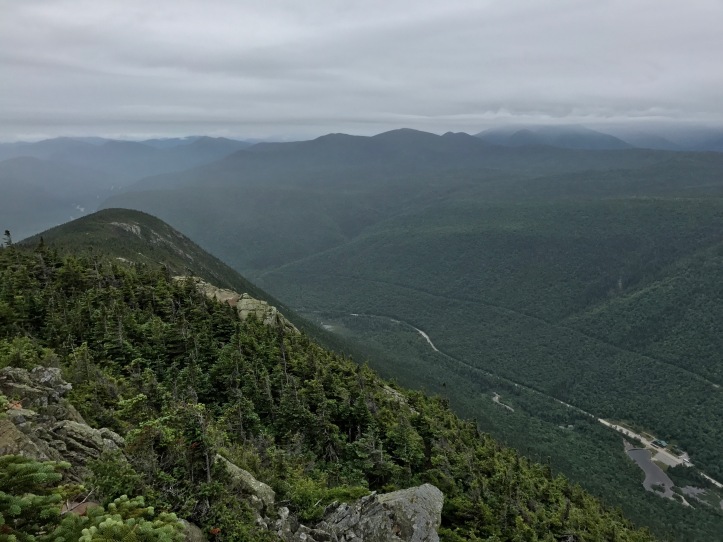 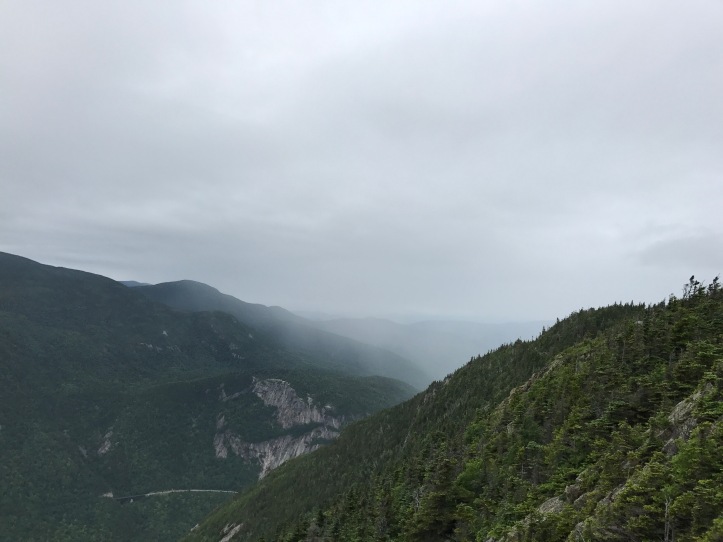 It was fun to watch the road grow smaller as I made my way up mount Webster. It became a little less fun when I realized I had yet to actually reach the top of the mountain. In fact, I had another mile of climbs like this to get to the summit: 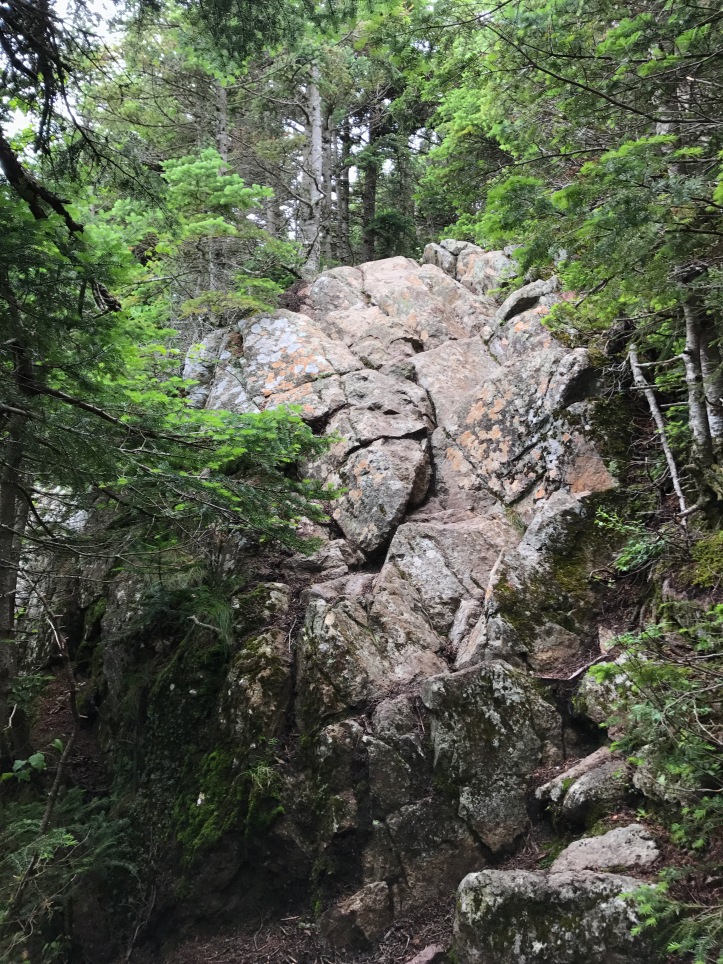 I finally summited Webster and made my way up the moderate climb to Mount Jackson. I tried to cover the easier ground as quickly as I could to get to Mizpah hut for lunch, but I got sidetracked by beautiful little clusters of lichen such as these: 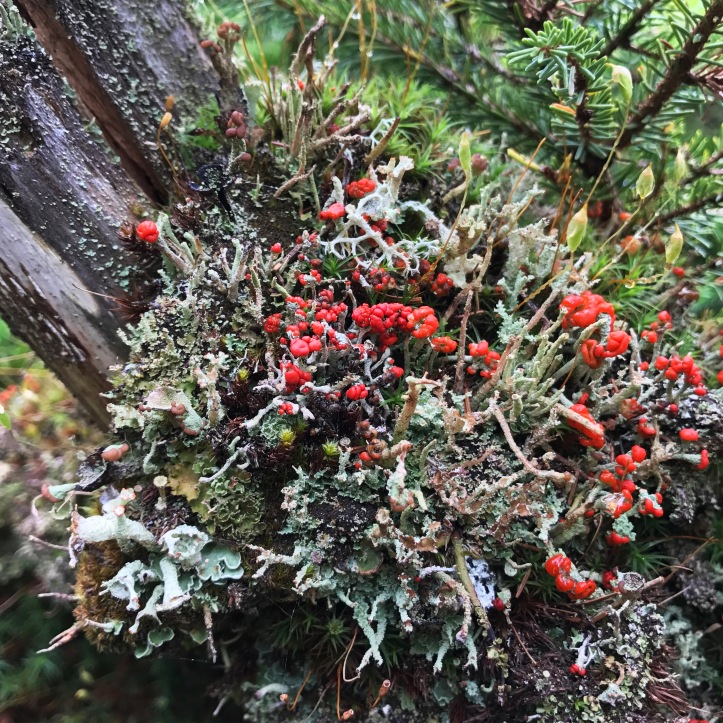 I also heard a strange bird noise that sounded something like the coo of a parrot. I stopped to listen and noticed a flash of movement a few trees away from me. The bird creating the sound turned out to be a large, plush, gray and white creature that was very interested in me. It hopped progressively closer and stared at me while I stared back. I later found out I had been watching a gray jay, which are notorious for eating food from hikers hands. 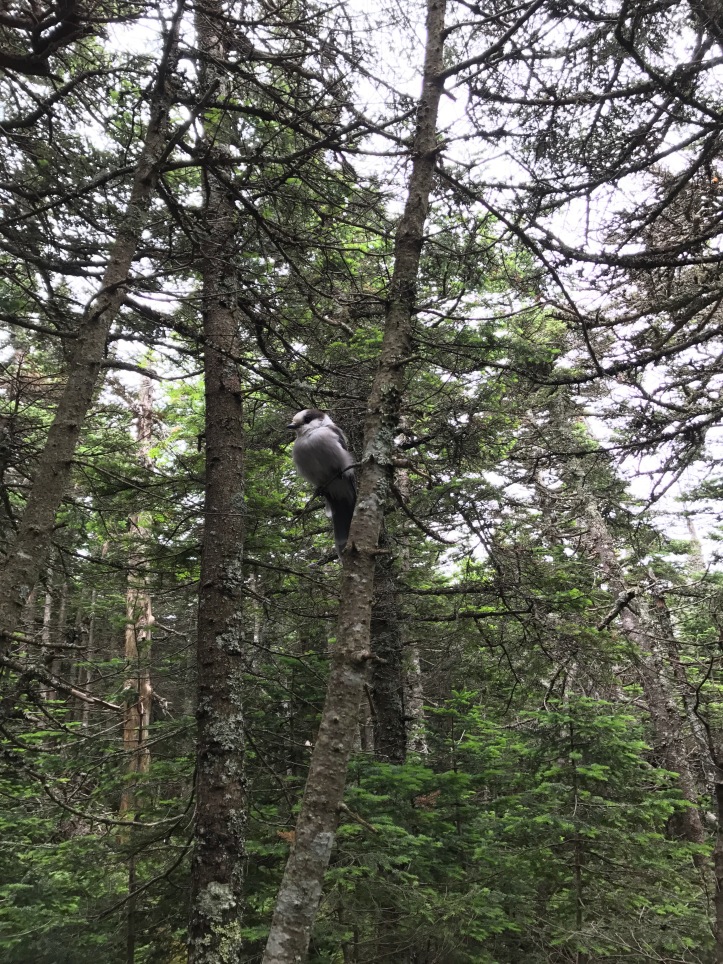 Near the top of Jackson, I ran into a group of people who asked how I was. I said I felt like a billy goat, which got a resounding laugh. The caretaker for the nearest campsite was out collecting garbage and followed the sound of our voices in search of ziploc bags. I walked with her over to the summit of Jackson (like 50 yards).  As I headed down the trail, she asked if I’d heard the m&m joke. I had not, so I stopped walking and listened. As the story goes, there’s an m&m on the ground. A day hiker won’t notice it. A section hiker will put it in their trash bag. A thru hiker will eat it and then tell everyone about it. This reminded me of how excited I had been about the  almonds I found on the ground back on bear mountain, CT.

It started to spit right as I began the descent from Jackson across flat, exposed rocks that glistened with moisture. I sat and scooched in several places for fear of falling the way I had yesterday with little in the way to keep me from tumbling down the side of the boulders. There were a few short, steep sections and then the trail flattened out to a bog area with boards and exposed rock that almost felt like walking on a sidewalk.

I made it to Mizpah hut around 1:15 where I bought a bowl of soup (split pea) and a piece of chocolate raspberry cake. I took off my shoes and socks despite feeling self conscious about the mildew smell emanating from my feet. I had to get some air on them and lunch is the best time to make that happen. A day hiker from the area talked to me while I ate, and he gave me a few snacks. I also scored gluten free crackers out of the hiker box, which is great because I’m low on Fritos and they can go in my wraps in a pinch.

Waves showed up around 130. He had slept until 10a in his stealth spot near Webster, which is how I managed to get in front of him. He remembered to ask about dinner leftovers, and the hut staff brought us a tray of surprisingly good lasagna. Waves tried to save some leftovers for a NOBO he’d met shortly before the hut, but he never materialized, so waves scarfed the rest while I ate my cake. Waves said the other NOBO also had plans to go to lakes of the clouds, which stressed me out because I’m slow and I worried that positions would be filled.

Around 230, we both decided it was high time to get moving to get LOC before it was flooded with thru hikers. I put on my disgusting socks, topped off my water bottles and hit the trail. Not long after the hut, I passed the NOBO that waves had mentioned. He tried to ask me where I was headed, which people seem to do a lot in the whites, but I didn’t engage. I gave him a hurried answer and never looked up. I realize my racing attitude isn’t in keeping the community vibe of the trail, but I was in full on scarcity mode for whatever reason. Shortly after the NOBO, a young day hiker with what appeared to be her mom, warned me that the trail was going to be steep. I politely thanked her and kept my skepticism to myself. Little does she know how steep it has already been.

Then I hauled ass, basically jogging the flats and catapulting up the rocky climbs. I did have to slow down for the short stints of descent every now and then. The total white out around me made me feel less guilty about rushing (see top picture). I stopped to take a few flower pictures, but worried that the NOBO would catch me. Then I passed through another bog that transitioned to an exposed trail above treeline. I somehow managed to catch up with waves, which surprised us both. He said oh! And then turned and kept hiking. About 20 minutes later, it started pouring. I almost immediately gave up on avoiding puddles and sloshed through ankle deep water, which made my shoes somewhat cleaner and actually felt kind of good on my feet. It was windy and foggy, and I could barely see waves a hundred yards ahead of me. There were several trail junctions to navigate. I can see how people get lost.
With about a half mile to go, I came to a painfully rocky section that slowed me down. Of course, because we were almost to the hut and that’s the rule. Thankfully it wasn’t a rocky shit pile the entire rest of the way because my ankles were tired and my feet were slopping all over the place.

Lakes of the clouds hut looked abandoned as I approached, but I opened the door to a bustling room full of people sitting at the long dining hall tables. I stood dripping in the entryway and asked about work for stay. A cheerful hut master approved immediately and showed me to the hall where thru hikers can loiter. I put my soaked pack down and was immediately approached by a lodge guest from CT who enjoys talking to thru hikers. He introduced me to his friend, Inga, who then began talking to waves as well. I decided to embrace their friendliness and ask whether they had qtips because I was running low on wound cleaning supplies. Inga came back with a giant first aid kit (she’s in the healthcare field) and rooted around for antiseptics. A few energetic SOBOs arrived for work for stay. I finally had to excuse myself from the conversation with the man from CT, so I could change out of my wet clothes. I changed into my zpacks wool socks (I love you, wool socks) and my neon pink long johns with my sleeping shorts over top to cover the growing holes in the rear of my pants. No need to scare the guests. Then I hung my wet clothes on the boards they use to pack things in/out of the hut. I sat on the bench in the pass thru areabetween  the dining room and the bathrooms and tried very hard not to eat all the snacks in my food bag. Waves and I played a game of go fish with the SOBOs while the kitchen croo jammed out to music as they prepared dinner.

We ate dinner around 815. I can’t say it was my favorite meal, but I did have a large salad and nearly ate my body weight in applesauce cake. Then one of the SOBOs and I did evening chores while everyone else opted for morning tasks. The SOBO has also worked in food service before, so we made quick work of the large pile of dishes. Then we loitered until lights out and set up our beds in the dining area. I made sure to set up near the back of the room to cut down on the noise from late night bathroom trips. I’m finishing this as people sit at a table behind me looking at trail maps with their headlamps.

Creature feature: the gray jay and a black & yellow bird that is potentially a warbler of some sort? or a sparrow?