Had a mediocre night of sleep because I couldn’t regulate my temperature very well. I woke up sweating and slimy but wary of opening my sleeping bag for fear of mosquitoes even though they’d been  surprisingly absent the night before. I finally couldn’t take it so i unzipped my bag and laid both of my legs out. But I’d been sweating so much that I was of course cold because my clothes were wet. Back-and-forth and back-and-forth.

I heard people stirring around 515 and decided to get up as well. I want to get to the hostel at a decent time in case they’re full because the weather is supposed to be crappy tomorrow. I’m guessing I will catch halfway there because it’s a logical place for him to stop, but we will see if I know him well enough. My legs were very sore and throbbing when I went to sleep but they’re less sore this morning. I gave my feet and calves a massage before I got up to grab my shorts from their hook. Then I made the stupid trudge up to the privy and took care of some things. Grabbed my food bag, which I’m always amazed is still there, and gave pretzel her snacks that she had forgotten to put her own bag before banging it last night. She and influx made fun of me during breakfast in a good-natured way, as far as I can tell. Ah the comforts of being mocked. 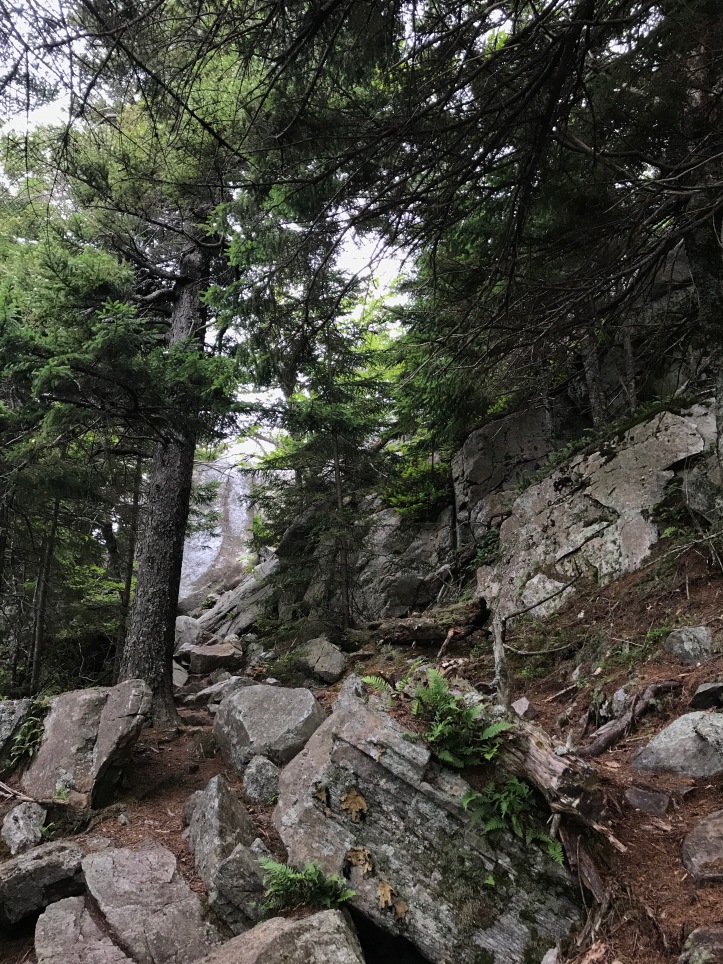 Our morning started with bouldering and climbing up Mt Cube to get to a view of smarts (top picture) where I stood at 3 PM yesterday. It felt good to see the physical progress from one mountain to the next. Then came a painful and extended downhill to get off the mountain. My pace slowed to a literal crawl, which is frustrating, but that’s as fast as I can go especially when my feet and knees are kind of sore and the footing is treacherous between the roots, the silt, and the sometimes slippery boulders. It eventually flattened out a bit and became more reasonable. I got a text from Lewis & Clark mid morning that said they had some things come up and have gotten off trail as of yesterday. I’m dying to ask what came up, but I assume if she had been willing to share, she would have done it upfront.

At some point on the descent, I put on my music and I could tell instantly that my attention was off of the pain in my body and how many miles I had left to go. I don’t want to drown out the messages I’m getting from my body, but it’s nice to take advantage of the experience of time moving quickly. I do regret that I can’t hear quite as many of the noises around me, but for now I’m going to keep doing it.

I took a break at a beautiful little stream that had a nice wading pool that I didn’t take advantage of. I decided to get water at the next stream because I didn’t really need it yet and I could save myself a half mile of  carrying it. The next stream was thankfully just as clear, but it didn’t have as many good places to sit, so I’m glad I took a break at the other one. I filled my two bottles and moved on. There was a relieving bit of an uphill, which was nice for my Achilles tendon’s to get a break from going down.

After a little while I came to this stream crossing that I assume has been made much worse by recent storms. About 15 yards to my left was a much more reasonable crossing. A few minutes after that, I came to the road crossing for 25A, not to be confused with route 25, which is like 10 miles down the trail.

There was some serious water damage to the road. Then came a flatter, less rocky section. The dirt in New Hampshire is very confusing. There are times when I’m walking on gray silt. Am I at the beach? Am I on a mountain? I just can’t tell. 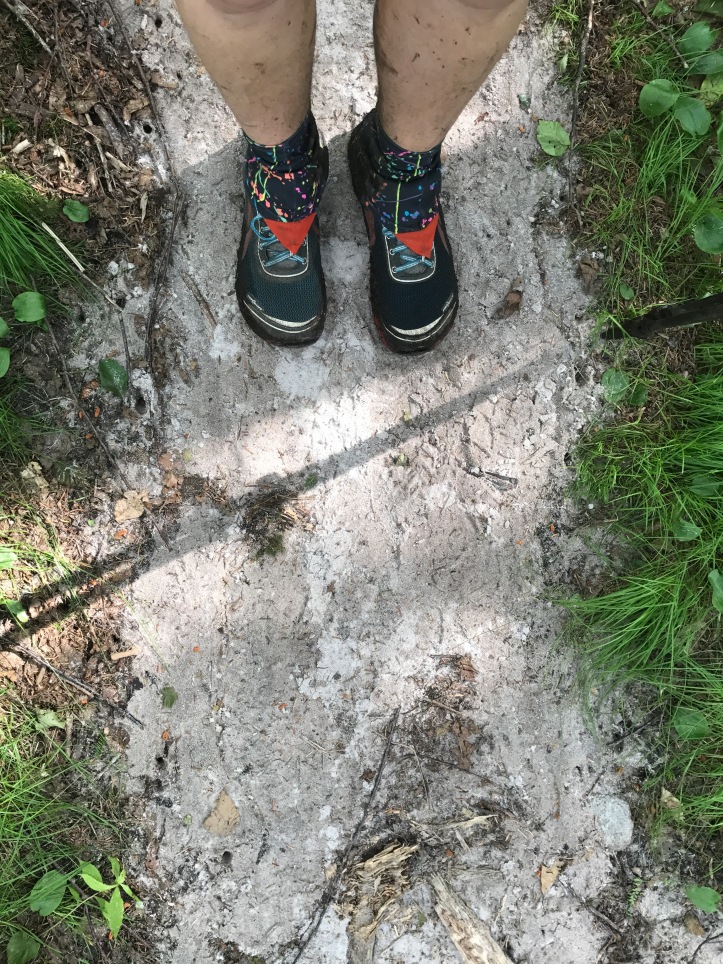 It was was so humid and the mosquitoes were out in full force. I could feel them bounce off my legs whenever I stopped for more than 10 seconds. My super toxic stuff keeps them at bay for the most part, but they always seem to find some little patch that I’ve managed to miss though, like the skin between my fingers or through my shirt such as the itchy spot I now have next to my belly button. I guess it’s better to be itchy from a bug bite than chafing, but come on. Enough with the biting me THROUGH MY SHIRT.

The trail came to a road crossing next to camp moosilauke. I turned right and walked down the road a few hundred yards past high water warnings from the other day’s storms. A yellow warbler of some sort crossed the road there as a big dump truck drove by. The trail then turned left back into the woods into a very soggy aggravating little patch to cross. The roots and mud continued, and I wondered if this was the supposed to the “easy walking” I was told to expect. It felt pretty hard to me, and I started to get frustrated by my experience. How do I find this so difficult when other people say it’s easy? That thought vexed me all afternoon and contributed to what felt like an exhausting and shitty day. At some point when I had a weak signal, I got a text from halfway saying he had just finished the descent from moosilauke and was at a hotel for the night. I felt crestfallen that he was still ahead and would not be at the hikers welcome hostel later. I had thoughts of quitting on and off over the next few hours. The frustration became even more entrenched as I passed 6 more people who all told me I had good miles coming up. I guess if you’re not scrambling across a boulder the hiking is considered easy in New Hampshire? I don’t know, but I felt so weak and cranky.

Somewhere near ore hill campsite, I ran into a SOBO named Moose who looks like a linebacker with wire rimmed glasses and a camouflage boonie hat. He told me that the omelet guy isn’t there because he’s on a trip to Pennsylvania or something. I had only heard about the omelet guy yesterday, so my hopes were not exactly dashed, but I’m still sad to miss another trail establishment. Here’s the setup for the infamous omelet guy who apparently cooks food for hikers as they pass through: 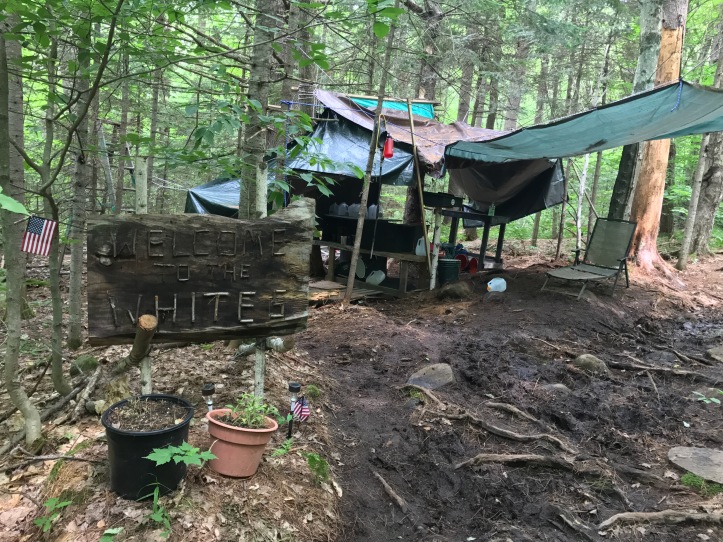 I asked moose what he regretted or would have done differently about the whites and he said he would have slowed down. Either to catch better weather or to just enjoy the views more. He rushed through to get the miles out of he way. After moose and I parted ways, I had to pick around several giant mud pits. My foot slipped the edge of one and I submerged my entire shoe in muddy water. Needless to say there was some yelling.

The trail was a dim, muddy shit hole for awhile. Then it opened up to a bright pine forest. I thought about stopping for lunch there because there was light and breathing room, but it was early and I didn’t want to eat at the bottom of the climb. I kept going through slightly less muddy but root filled annoying stuff until I got to a place where there was a decent rock a couple yards off the trail. I sat and made my wrap and hoped the periodic crashing that I heard behind me was squirrels and not a bear approaching. I saw two southbound people that I happened to see yesterday on top of smarts mountain. They stopped to talk to me for a minute. I told them what hike I was doing and they told me they’re section hikers shuttling themselves and hiking between roads. They’re likely to just backpack through the white because the road access is far more limited and time-consuming. They, too, said I had some nice walking ahead. They moved on and I slowly packed up to begin hiking again.

As I hiked, I wondered if I would see influx and pretzel again or if they would head on to the shelter before I get to the hostel. The trail was actually nice for about 20 minutes and then turned into a mud bog again. There was a long descent past a pond that I did not bother walking down a side trail to see. The trail was rocky and horrible and my knees were getting increasingly achy, which made me anxious for the incredibly steep descent from Moosilauke that everyone keeps talking about. I could not wait for my day to end. I had little to no signal all day and felt lonely and cranky.
I finally made it to the route 25 road crossing around 430. The cooler of trail magic that I had been told about by a SOBO named grandpa was indeed there. I grabbed a Gatorade and sat on the cooler eating cinnamon graham crackers. Then I made the .3 mile road walk down to the hostel. Influx and pretzel were organizing their food out front at a picnic table. It felt good to see them. They’re staying the night to see how the weather is tomorrow. We shared laundry and hung out a bit. First, I sat and bitched about the trail, which no one else seemed bothered by. Influx laughed and said he would really like to see me go off on a rant.
Hikers welcome hostel is a modest but cool operation. The plumbing is all outdoors, with a shower stall, a washing machine and communal sink, and a toilet stall out behind the main building. There’s also a covered picnic table area and a second bunkhouse that is much newer and nicer than the main building. I didn’t have the energy to look around so I took a bottom bunk in the main building. Then I proceeded to sit like a zombie outside socializing and being generally exhausted. I eventually had a very satisfying shower and put on this sweet loaner shirt:

The rest of the night is kind of a blur. I didn’t do much writing (I’m finishing this the next day as people watch a movie downstairs). My anxiety about the whites vacillates between manageable and crippling. But people do it. All the time. Now I should stop staring at this idiot box and figure it whether I’m going to walk into the woods to save $25 or if I’m going to stay here for the night because it just started raining. This will probably be the last blog for awhile. For real this time.
Mile 1776.3 to mile 1791.1 (14.8)
Total miles: 787.9
Creature feature: nothing but me and my cranky self.