I slept until 730 this morning bringing me to a grand total of 9.5 hours of sleep. Huzzah. And evidence of needing to take a break because I felt ready for a nap after breakfast. Instead, I went to work on fixing up blog posts and helping halfway with his technological issues. That brings us to lunchtime wherein we got a ride to the deli by Alex, the manager, who has been helpful and interesting. He’s into mycology and makes tinctures from mushrooms he’s foraged. He wants to build a model for using forests in ways that go beyond logging. Sort of a roots to treetop model where mushrooms and other medicinal plants become part of the economic model. Or something like that. Anyway, guess who I saw at the deli??

Disco! Moss caught me taking his picture again. They came by the lodge later, but didn’t want to pay for tenting so they kept going. I didn’t really need to buy a sandwich and probably should have just eaten the food in my room, but I have a weakness for sandwiches. Oh well. Halfway and I ate in the common room while talking to one of his trail friends who had arranged to be picked up by her sister there.

After our late lunch, I went back to my room and felt too full to lay back down to continue editing. I wandered down to the pond and met these two goofy dogs. 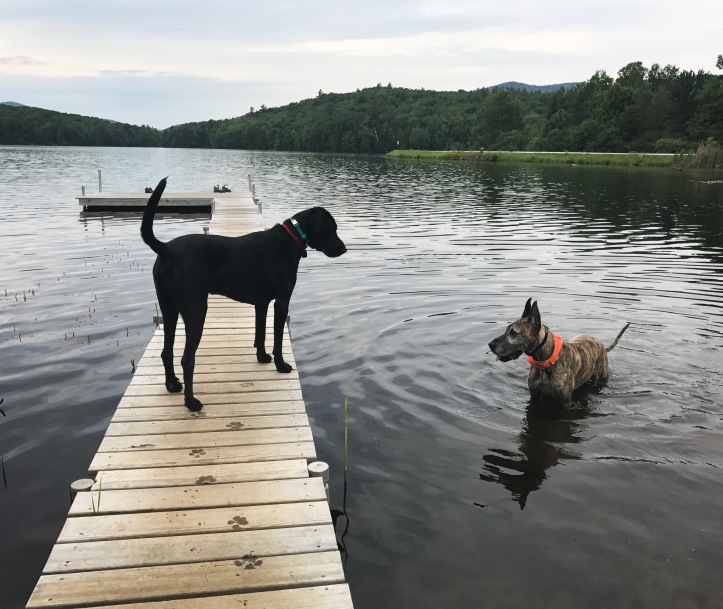 Sat with my feet in the water for a bit and then laid on the dock to let them dry out. I felt guilty for not taking care of other tasks, but Halfway informed me that soaking my feet and doing nothing were indeed “productive” actions. I also received further instructions on how to do nothing from my dad and stepmother.

After a bit of nothing, I went back to my room and exploded the food boxes I received from all of my parents. Regular supplies and a snack attack box. I’m returning here on Sunday and the staff said I could leave my food box here. That means I get the privilege of carrying 1.5 days of food, which is good because I have way too much right now. Then I did little things like washing my pot, backflushing my water filter, and making a haircut appointment for when I’m passing through Brooklyn in a few weeks. Need to tame this mountain magic going on up top. 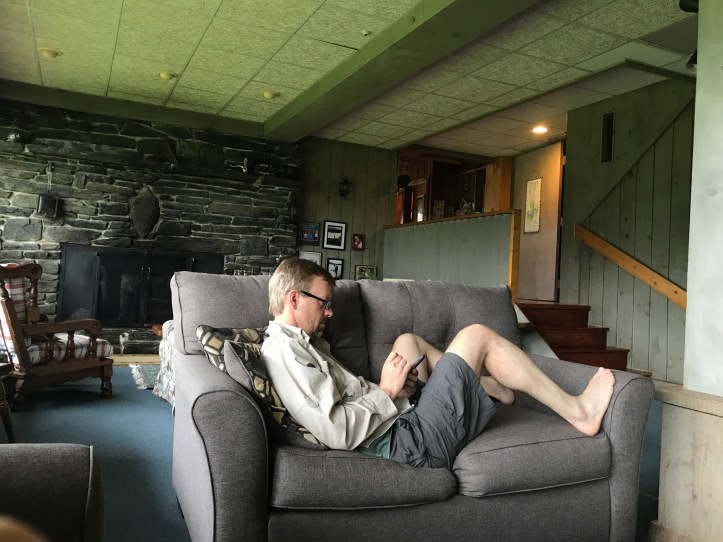 I went downstairs to find halfway deep in blog writing mode. I sat on an adjacent couch and went down my own rabbit hole of supply planning and transportation planning. Brace yourself for minutiae. I have to somehow figure out roughly where I will be (ha) and how to get from there to Brooklyn in 3 weeks. The family friend in NH that I know lives too far away to reasonably drive me anywhere, so I started calling NH hostels that offered shuttle services. A few phone calls later (my favorite) and some internet work and I now have a halfway decent plan (bus out of Gorham to Boston and a train from Boston to NYC) with a few moving parts (e.g. where will I be in relation to gorham? who the F knows?? I do, sort of). I have the person at the farmhouse inn and the person at the white mountains hostel to thank for figuring out where to even start. When I told the white mountains hostel guy I was trying to get from grafton notch to NYC he said “oh well you take this bus line from gorham at 750am to Boston and go from there.” Done. He gave me a somewhat flimsy response on whether he could do a shuttle when I needed it. When I balked, he said don’t worry, if I can’t do it, this guy can, and if he can’t, there are these other options. We’ll get you to gorham. So I gave in to having planned as far as I could plan. And then I bought train tickets from Boston to NY because I’m not riding buses for 10 hours in one day.

Now I should get to sleep so I can be ready for a day of hiking in the rain. Gee, when was the last time that happened?

Creature feature: fish jumping in the pond and all those silly dogs