I slept horribly last night because of the cold temperatures. The fringe benefit to freezing is that there were no mosquitoes trying to eat my face in the night. I tossed and turned and supposedly snored a bit (according to jd), thus making it a 3 part harmony with the other two snoring fools.
After creaking out of my warm sleeping bag, I ate breakfast and thumbed through the trail log. Halfway is about a day and a half ahead of me, according to his entry, which is exciting. I can’t wait to catch up to him. I miss his goofy laugh. I was packed and ready to go before JD, so I left with a wave. We have plans for similar miles today, so I’m sure I will see him later. The trail was very forgiving today, which made it a good day to go long. My head ached and I felt quick to tire on the hills, but those seem to be the only remnants of my fall. Well, that and the cuts. The ones on my hamstring come complete with bruising surrounded the scrapes.
The sun was out nearly all day and the temperature remained at the top end of perfect hiking weather once it warmed up. The morning started with a leisurely stroll down to this bog next to railroad tracks and past this rushing stream.

I love walking across railroad tracks because I feel like I’m trespassing, and they always make me think of possibility even though most people don’t travel by rail these days. I also saw a lone lady slipper, which I wasn’t expecting. After the stream, the trail crossed a small paved road and climbed up and around nuclear lake.

No clue why it’s called that, but the mosquitoes were too awake for me to stand around admiring it for long. The trail around the lake was flat and wide. Whenever it gets like that, I stop in disbelief to check my map. Experience dictates that easy walking means a wrong turn of some sort. But not so today. I had a flat, buggy walk around the western half of the lake. Then the trail went through a series of rolling hills, never gaining much in the way of elevation. I ran into Cog, the other snoring man from the shelter last night. We talked a bit, but his pace was too fast for me, so he pulled ahead. I saw him again shortly thereafter as he stood at Dover road admiring the famous Dover oak.

It’s apparently the oldest known oak tree on the entire AT. We took our obligatory hugging pictures and then cog took a left to head into wingdale. I continued north where the trail skirts a series of pastures. Around noon, I plopped down in the shaded grass alongside the trail because I couldn’t hold out for the perfect lunch rock. Made myself a “deli salad” tuna wrap with cheese, mustard and a smattering of Fritos. I felt tired and achy, but satisfied with getting in a little over 8 miles before lunch. Day walkers passed me sitting by the trail. I can only imagine what they thought, but at least I’m only one day off from having showered. I met a couple going south that was flabbergasted by having met a man coming “all the way from VA” before happening upon me, another weirdo from far away.

Eventually the trail took a hard left into swamp/marshlands (this view is actually south from whence I came because the light was better than northbound). I sat at one of the benches watching swallows dive into the tall grass and listening to red wing blackbirds whileI rested my feet. They’ve been pretty sore today with little provocation in the way of terrain (the rocks have been practically nonexistent). There’s something otherworldly about walking along a boardwalk surrounded by grass that goes above your head.

At the end of the boardwalk I crossed another set of railroad tracks and hit route 22. I happened to stop and look at the trailhead sign, which I don’t often don’t. On the announcements, there was information about a hiker friendly garden center just up the trail. Intrigued by a welcoming environment, I decided to stop in for a bathroom and to check out the soda options. Sadly no orange soda, but the woman working at the center was indeed friendly. I passed on the option to fill up on water because there were streams nearby and it meant less to carry. I sat out front for a few minutes resting my feet yet again. 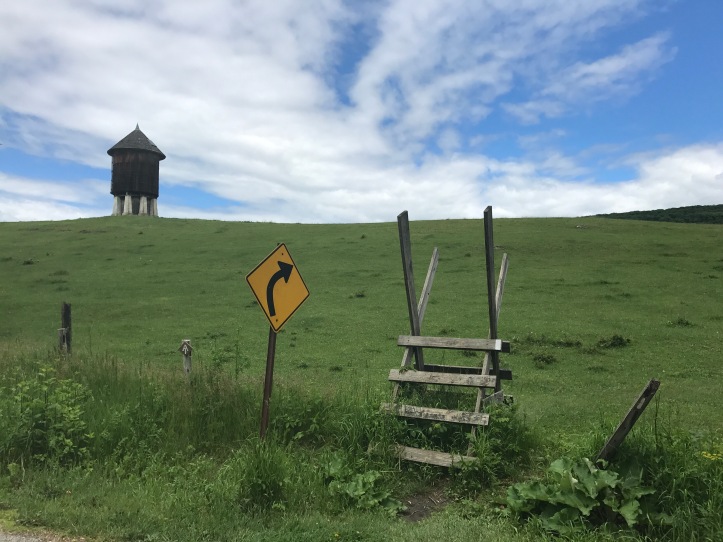 Which led me to cows (top picture)! Cows are LARGE, and there were several calves in the field. One of the larger cows was scratching her head against the trail marker directly in front of me. She stared me down and scraped her foot against the ground. Something about her body language and the calf standing so close to her made me wary. I had visions of being bumrushed by a cow, so I turned around and gave her some distance. Then I waited for her to tire of the pole and wander down the hill a bit. I know I nothing about cow behavior, but I’d rather wait around than end up trampled by a protective mother.

After crossing another turnstile, I left the baying cows behind and walked through a field surrounded by tall grass. I saw a new bird that I haven’t had a chance to look up yet. It’s black and white with either a yellow cap or a white one; the lighting made it hard to tell. Because of my bird watching and general lollygagging, JD caught up with me as the trail headed back into the woods. I wasn’t in the mood for chit chat, so I gave monosyllabic answers for a bit, but I felt rude and tried to engage more with little success. I eventually let him go ahead of me while I got water at a less than ideal stream. Nothing like drinking water the color of Pinot Grigio. It actually tasted better than the water I got from the pipe at last night’s shelter.

Much of the next two miles was a shoe eating muddy mess. There were long sections of boardwalk that seemed to drop off into quagmires that could also have used boardwalk. I nearly lost my shoe twice and definitely did some cursing as my feet kept getting half submerged in brown water. Thankfully the last mile and a half were much drier. My feet were very sore at that point, and I felt exhausted. Last mile crankies + a headache = snack attack. Is this why my regular clothes don’t fit?? Or is it my buns of steel? (Really, I had to switch into shorts for my dad’s birthday dinner because the jeans I brought were painfully tight.)

I made it to the shelter and rejoiced in the fact that it’s literally on the trail. Powered through my tent set up and felt grateful that the ground was relatively soft, which meant far less digging around for desirable stake spots. Then I walked 0.1 north up the trail to a little stream and filtered 2.5 liters of water. Put together a dinner of chili Mac by Mary Janes organic farm and listened to jd talk about I don’t know what. At that point I just wanted silence, but he’s a space filler. Polished off half a snickers and forced myself to not eat all the yogurt covered pretzels, which is easier said than done. Then I brushed my teeth, and jd and I hung our food on one bear line. Now I’m writing this with the moonlight shining through my tent, the sound of a train in the distance, and the texting glare from my steady because she thinks I’ve stayed up too late. She would be right; it’s way past hiker midnight. 10p. Gasp.
Mile 1438.0 to mile 1454.6 (16.6)