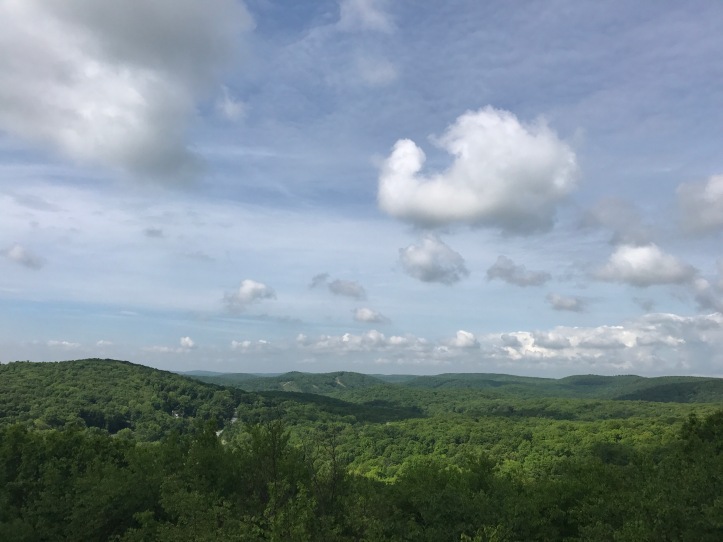 The bear did not return to camp. At least, not that I know of. I slept through the night until about 5am when the birds and my internal clock had their way. Buzzcut and I had talked about getting an early start so we could bypass the next shelter because of bear activity. Apparently, there’s a very bold bear around fingerboard shelter that has taken to stealing backpacks and food bags. JD actually spoke to a southbound woman whose pack was taken by the bear last night.

Given the long miles and the difficult elevation changes, I didn’t linger in my tent. Went through my usual routine except this morning included a banana! Because I bought one at the bellvale shop yesterday. When I was ordering my ice cream, I saw the pile of bananas behind the counter and asked if they would sell me one. Tai chi liked the idea and did the same.

Buzzcut headed out around 6a because she doesn’t eat breakfast and was ready in like 25 minutes. She waited for me farther down the trail, and we walked together for the day. The first hour involved a few gentle ups and downs. I felt stumbly and sleepy. After a longer descent down to a road crossing, we passed this waterfall and then we had to walk up the stone steps off to the right. 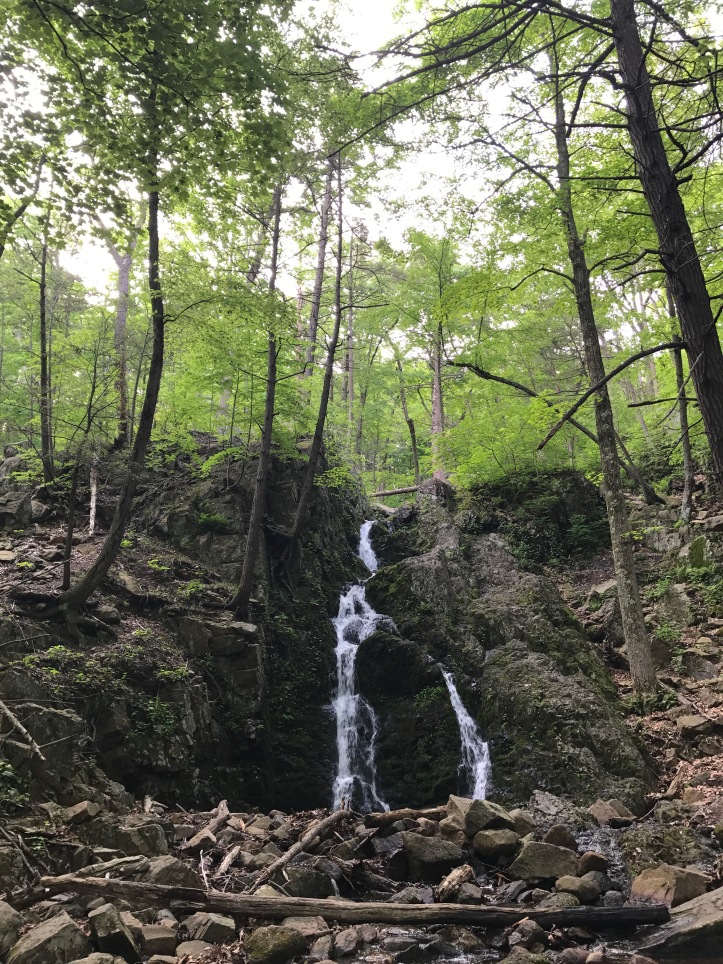 The bugs were out of control this morning. Gnats kept buzzing my ear and my bug spray was once again no match for the mosquitoes. We ran into JD not long after the falls and leap frogged with him for the rest of the day. The next couple of hours past the falls consisted of rolling hills in a relaxed silence. At some point, buzzcut and I were at an overlook (not talking) and we could hear JD approaching with a chatty NOBO. Buzzcut groaned and then raced away from the overlook with me hot on her heels. Neither of us felt like talking and through introvert telepathy decided to make a break for it. There’s no way we could stay in front of them for long because they’re both too fast. Thankfully, the NOBO passed with relatively little in the way of chitchat.

Sometime around 11, we crossed little dam pond (that’s really the name), and ran into chatty NOBO again (his name is Norm, after the cheers character). He was on the verge of loopy, sitting on a rock by the dam eating all of his food to lighten his bag. We stopped to filter water and ogle the water snake hanging out by the damn. The trail hugged the edge of the pond for an enjoyable stretch. This rocky edge reminded me a bit of Maine. 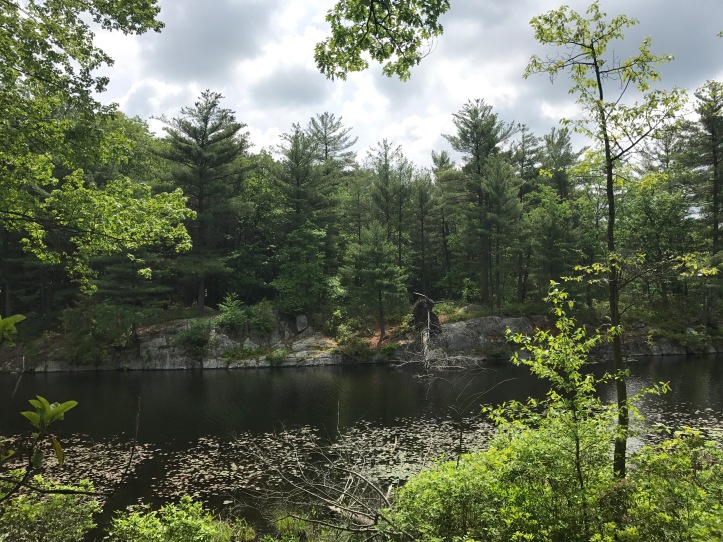 At some point this morning (it’s all running together right because I’m writing this late in the day) we hit another insane rock scramble that was on par with Lehigh gap in terms of approaching rock climbing status. Not exactly easy to do with a 25 pound pack that rubs against rock faces in tight spaces, thus throwing off your balance. I looked up at what we were about to do and just laughed. Then I grunted and cursed my way through the obstacle.

We stopped for lunch at an unofficial campsite that looked like a great spot with a soft pine needle surface, a fire pit and this box of first aid trail magic: 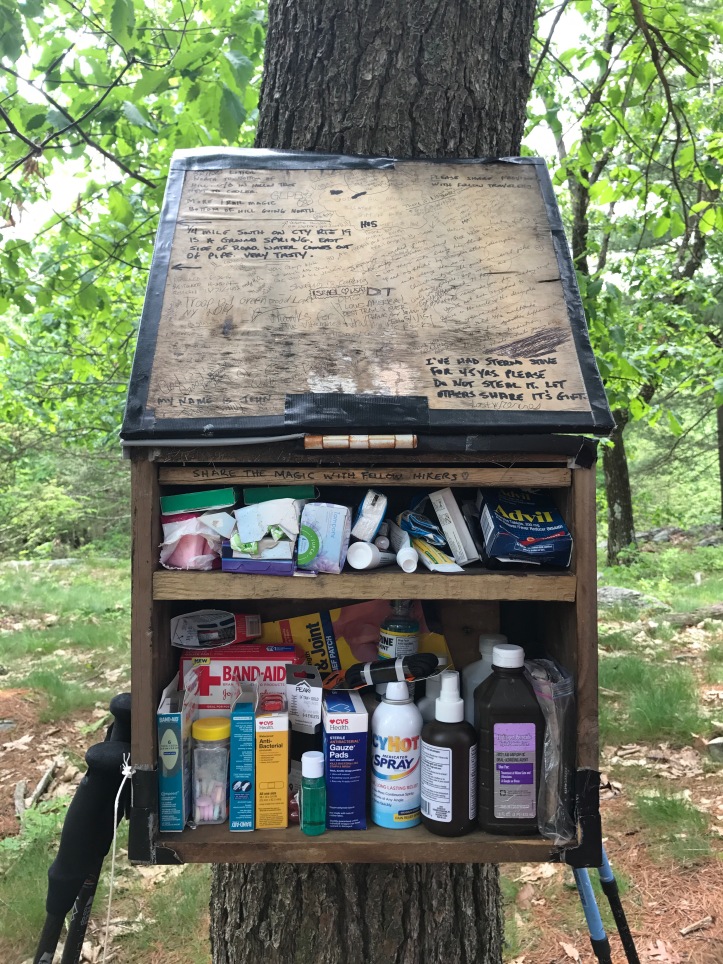 I ate my usual tuna fish, honey, frito wrap with the special treat of cheese while buzzcut ate a pb wrap. Then we shouldered our packs and tried to get back in gear. Everyone felt tired today. I think the boulders from yesterday really did a number on us. I know my legs were protesting on a lot of the ascents, of which there were many today. My knees were also cranky while I picked my way down the incredibly long and somewhat treacherous descent to route 17. I could hear the whir of traffic on I-87 in front of us for much of the descent. At one point, my toe got stuck on a tree root, and I nearly lost my balance. There are so many moments like that throughout the day where a near miss could just as easily be a serious injury in the making. Thankfully, I had been heading down hill with my weight in my heels to make it easier on my knees, so my center of gravity wasn’t that thrown off by the root. When we finally got to the bottom, I complained that my legs were jello and buzzcut concurred. We decided to take a break after we crossed route 17. As we languished in the itchy grass, JD arrived looking wilted but in good spirits. 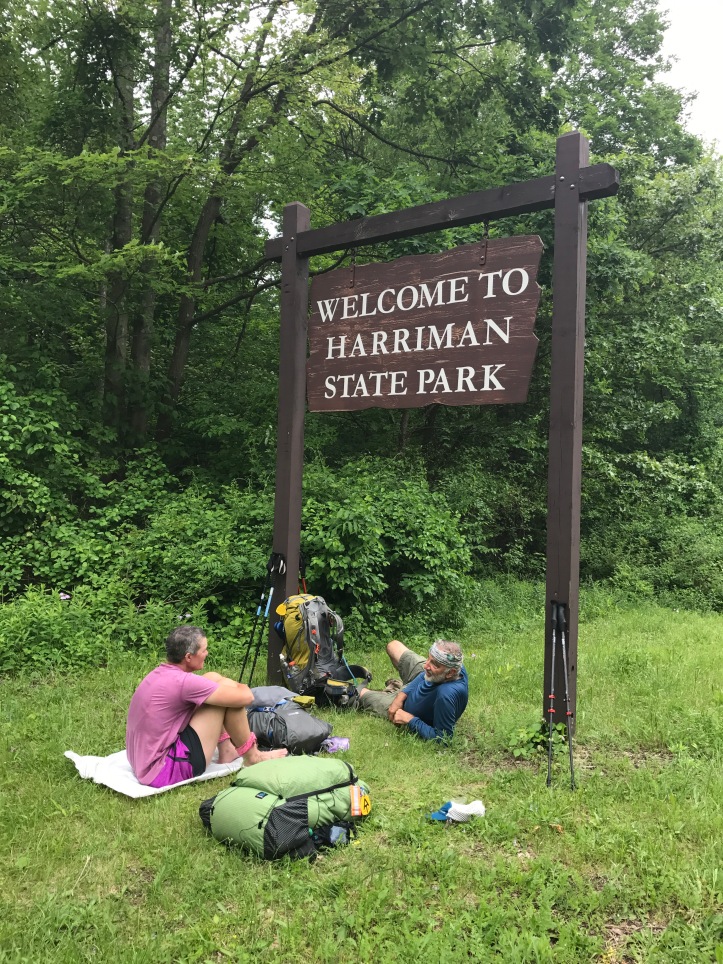 We sat around eating snacks and musing about the crazy downhill for a few minutes. Then we forced ourselves to get up lest we fall asleep in the grass.

After a brief road walk, we took a right turn and ended up in a parking lot I recognized. This view marks the beginning of a birthday hike I did my with my former partner and our dog that we refer to as the death march. 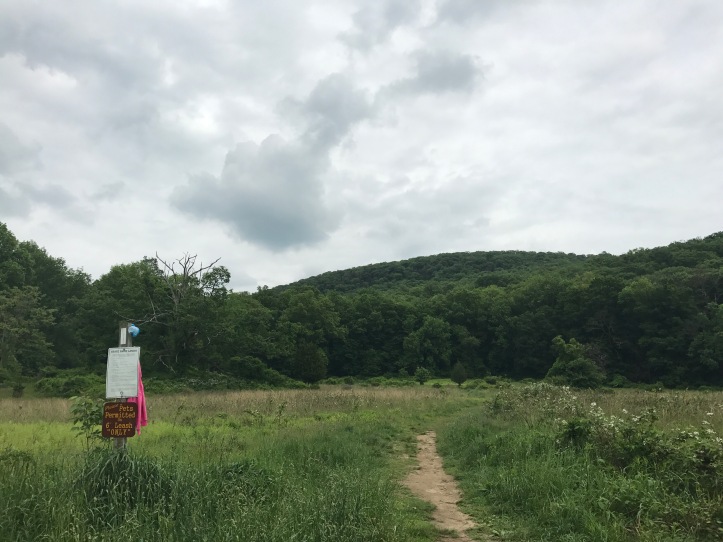 On that hike, we got lost on exposed boulders, accidentally went a mile past a turn, and ran out of water with about 2 miles to go on a blazing summer day. I was definitely more prepared today, but Harriman continues to prove itself as unforgiving terrain. It started with a loooong climb up to a beautiful grass covered open wooded area. Then we got taken down into a series of mini valleys between large hillsides. We skipped the side trip to island pond. I’ve seen it before and buzzcut couldn’t be arsed to walk any farther than absolutely necessary. Not long after the pond, I told her how much farther we had to go before we hit the state park bathrooms, and she nearly lost it. I thought for sure she would stop at the bear ridden shelter because she seemed over it today, but she pushed onward. At one point when she was hiking behind me, I saw her stop, rip off her pack and start madly throwing things out of it. I almost asked if she was okay, but I knew that question would have pushed me over the edge so I let her be and kept walking. A few minutes later she caught up with me and JD with her bug net secured to her hat. 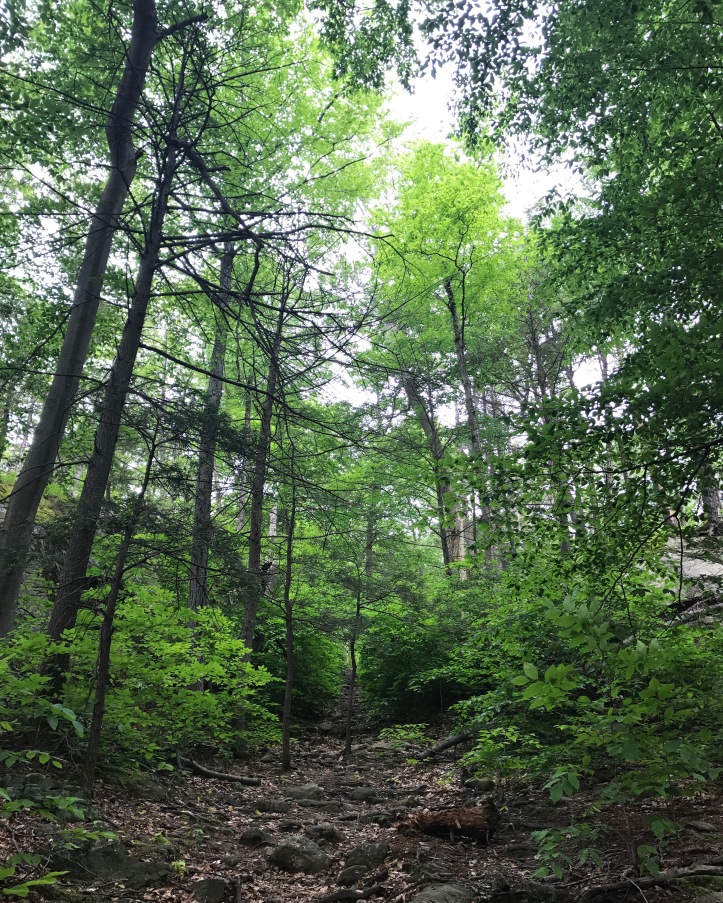 Around mile 14, when I was checking the distance to the state park office nearly every half mile, we came to this pesky climb. I was in decent spirits for most of the day because I like to work hard and feel exhausted, but this one nearly pushed me over the edge. After what felt like forever (I feel like I say that a lot), we reached the turn off for fingerboard shelter (aka bear shelter). I led the way for much of the afternoon because I’m the fastest on the hills, but I needed a break so I asked JD to go in front. He made a joke about how letting him lead assured that we would have an uphill soon. Like clockwork! More hills. 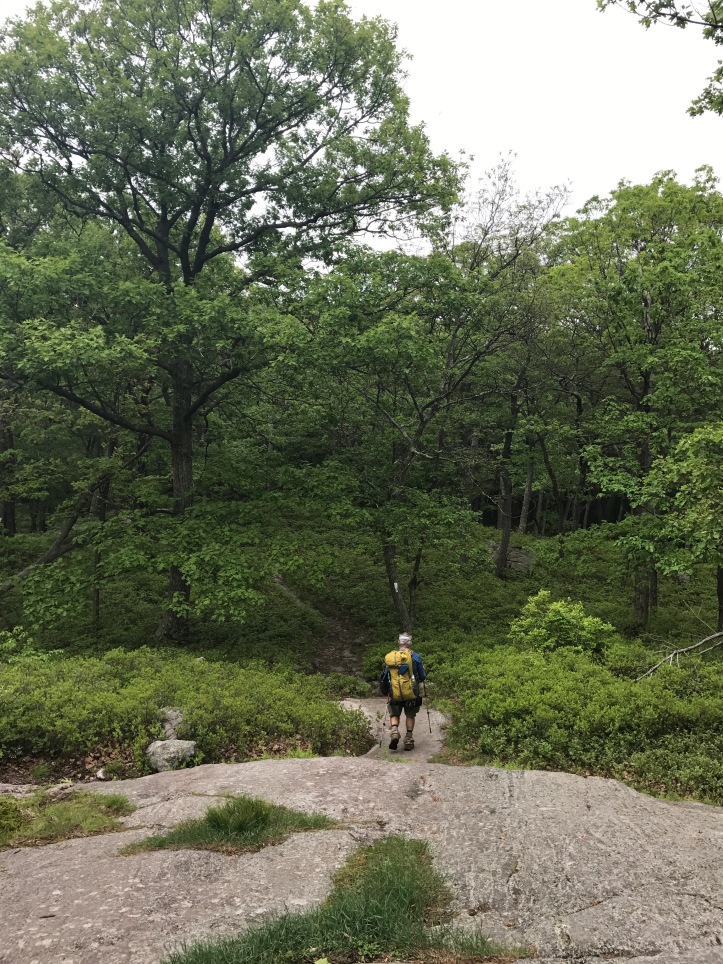 The mile from fingerboard to Arden road was a painful one because of long stretches of exposed boulders. It was a nice break from the ankle rolling rocks and uneven ground, but it felt nearly as pounding as road walking. Do I sound like Goldielocks?? This path is too rocky. This path is too smooth.
We hit Arden road and took a right, which led us to tiorati circle. It felt like a time warp to be hiking in a place I have been before. It’s even more complicated given the recent end of my relationship and how much time we’ve spent hiking together in these woods. I didn’t have a lot of mental space or privacy to cry today (so many day hikers in Harriman), but the urge was there. Being somewhere familiar made me even more aware of the fact that I’m in a very different place right now and I’m actually doing this.

We got down to the state park office to find out that the showers were closed for the day. I had hopes of one of the attendants bending the rules for thru hikers, but no dice. Buzzcut was less upset than I expected. She’s somewhat of a pessimist, so I don’t think she ever believed there would be showers. I personally didn’t care about the showers because I assumed they would be cold and you couldn’t pay me to take a cold shower after hiking. My digits start get cold and sad on their own after I stop moving. After we found out about the lack of showers, I declared the need to eat dinner before having a meltdown. It was 6p and there was no way I could hike back up the road to wander northward looking for a decent stealth camping spot without food. So we huddled at a picnic table in the staff parking area and ate our dinner. I made a strange but good chipotle mac & cheese (packaged food from horleys in unionville). I plugged my phone into a socket in the bathroom the minute we arrived and by the time we left, it was almost fully charged. I’m trying hard to avoid staying a a hostel before I leave and phone charging is one of the main reasons (besides a shower) to get a hostel.
As we were getting one last water fill up, a gentleman walking a large spaniel hunting dog of some sort walked by and said are you guys hikers?? He stopped to chat and buzzcut cut right to the chase asking if he had a truck and if he would give us a ride back up to the trail. The man did not have a truck and skimmed right over the request. We ended the convo shortly after that. JD also had a conversation with him at the fountain wherein the guy told JD it was supposed to rain tonight. Great news at that point in the day. We grumbled and packed up our food. As we were heading back to the road, the gentleman drove up in his car and offered to let us stay at his house. He said we could take showers and crash in the rooms upstairs. I would never have agreed to such a thing if I’d been alone, and I still felt uneasy on the ride to his house in Montvale, NJ. So much so that I wrote down the directions to his House on my phone and sent a picture of his license plate to my steady. He wasn’t any creepier than the next guy; I’ve just seen too many crime shows and too many news reports. But we arrived at his house safely. I’m now showered and laying on my sleeping pad on the floor of his adult daughters room. Buzzcut is snoring her face off in the bed above me, and I’ve stayed up too late writing because I got a late start. It’s supposed to rain for much of tomorrow. Might have to modify my plan to do another long day, especially if JD can’t be convinced to leave this house in the rain.

Total miles: 386.2
Creature feature: so many cute dogs. I didn’t get any pictures of them but I stopped to say hello to most, including a waddling panting Norwich terrier shaped like a fire hydrant. Oh and several snakes. The water snake from the lake and a couple of giant rat snakes in Harriman.