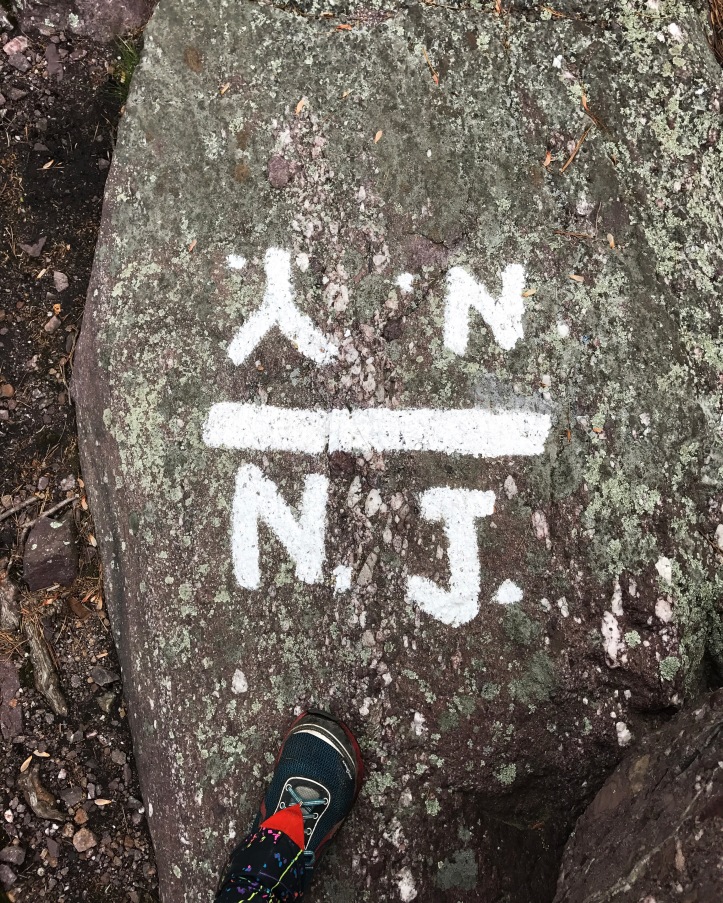 Slept horribly last night. My new trail name should be mosquito bait. Little bastards tried to eat me alive the second half of the night. I woke up around 3a after a nightmare about cats and dogs being abandoned on a busy New York street and then took forever to fall asleep because of the imagery and the bugs buzzing around my head. Have a nice lump on my cheek from getting bit in the night. No more shelters for me until it’s too cold for mosquitoes.
Two gentlemen from Alabama started dragging all of their stuff out of the shelter around 530a. Somehow they still managed to be slow to leave. Anyway, I gave up on sleeping and slowly went through my routine. Here’s an abbreviated version. First: privy time (thank you, reliable body for not making me dig cat holes at random times throughout the day). Second: breakfast of joy. Third (if it’s warm): change shorts in my sleeping bag. Four: shove everything under the sun into my bag (methodically). Five: brush teeth and put in contacts. Six: pack up tent if applicable. Seven: quick glance around to make sure I didn’t leave anything. Eight: walk out of camp and try to ignore all the things that hurt the first 15-20 minutes.
Today’s aches and pains were concentrated in my ankles. Thankfully, my left one was not really affected by the near fall last night. I forgot I’d even strained it after an hour. My right ankle felt better than usual until the never ending bouldering around midday. More on that in a bit. I had an easy first hour or so walking. More planks across boggy lowlands and easy going flat stretches. There was trail magic in the form of water and a trash can at the first road crossing I came to. It sounds silly to call a trash can exciting, but any chance to get rid of weight and unnecessary items is like hitting the jackpot out here. 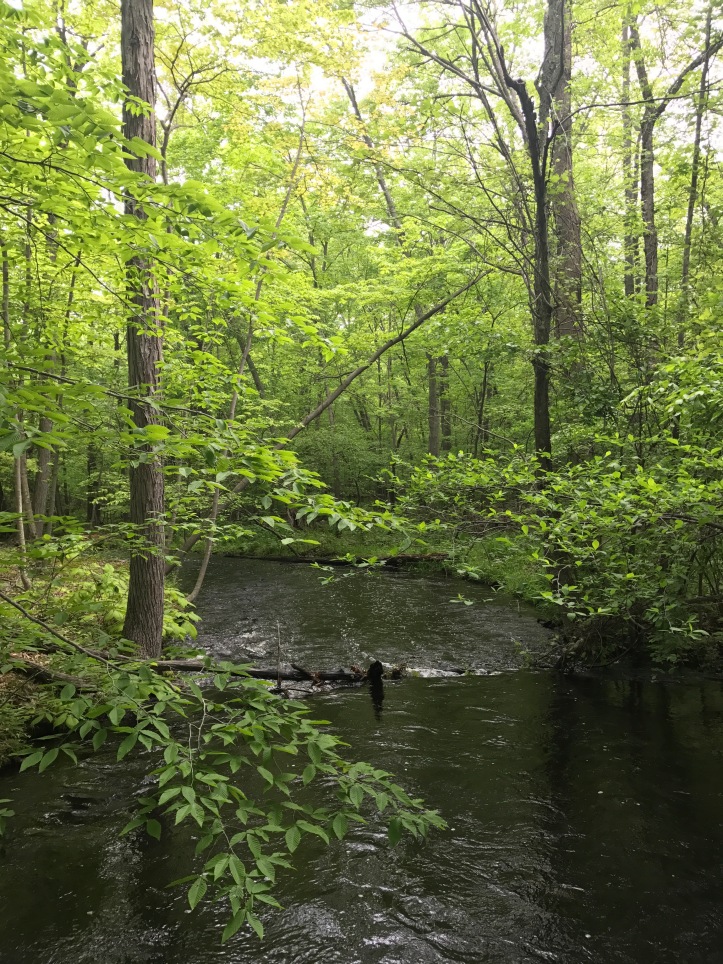 Right after I crossed this stream, buzzcut and an exuberant guy named chainsaw caught up with me. He commented on how the awol guide had disappointed him by saying this section was going to be hard. About 2 minutes later, he got what he asked for. It went from soft, flat dirt to a rocky rollercoaster. Thankfully the rocks were not of PA caliber. 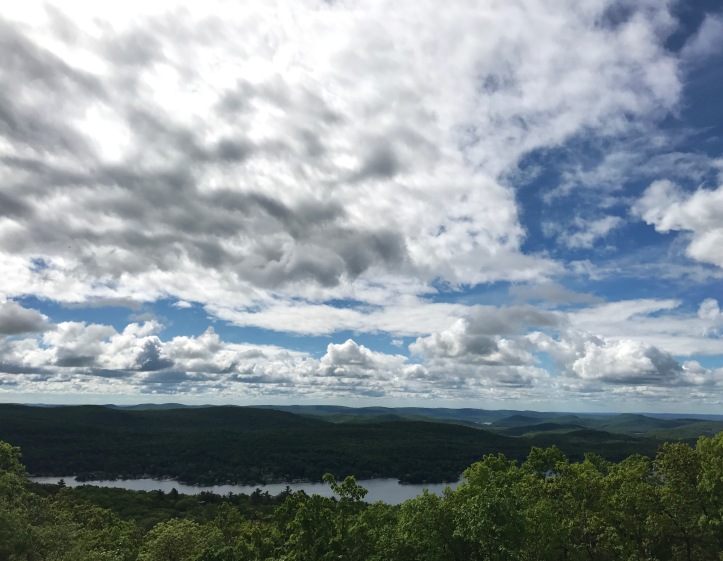 Sometime around 10, we crossed into new york state! Bye bye swampland of New Jersey, hello rock scrambles of New York. Because that’s what we did for the next 3 hours. Here are a few choice pictures from the bouldering and ridge walking. We saw the new York skyline from prospect rock, climbed a rebar ladder, and scrambled up and over countless boulders. 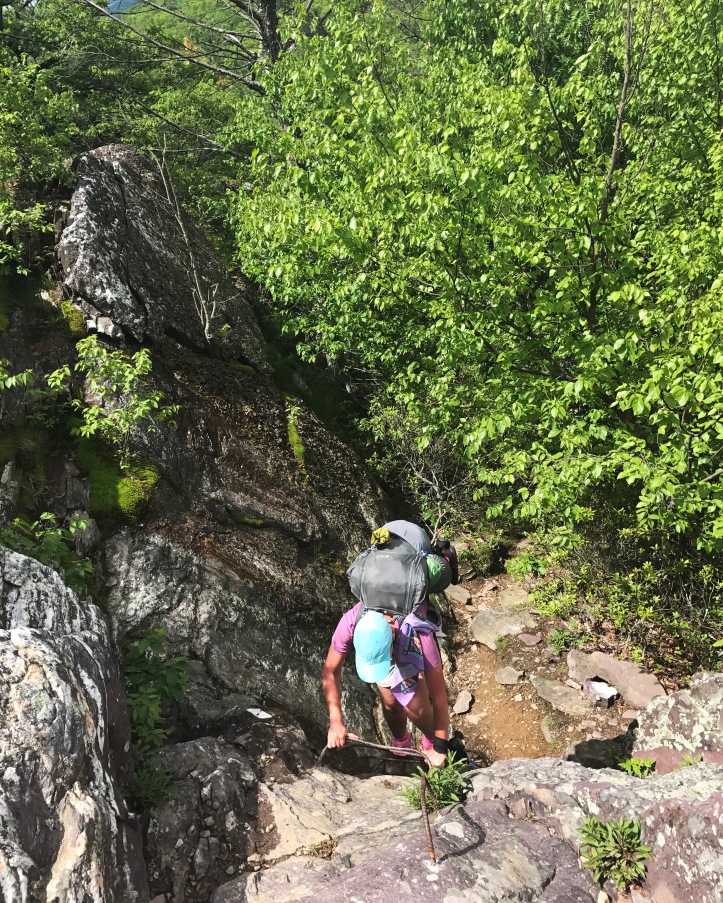 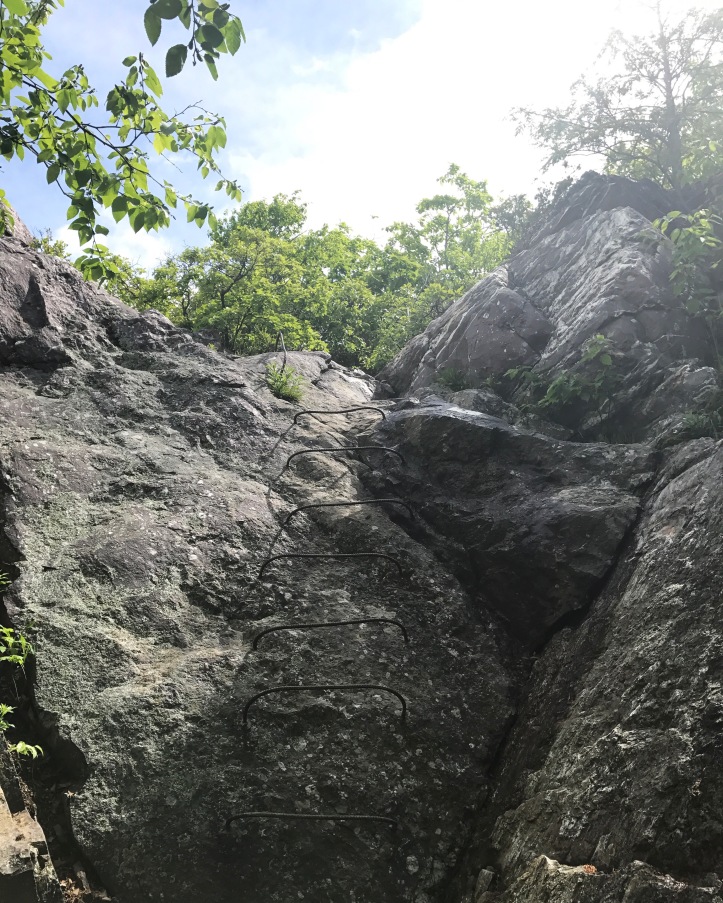 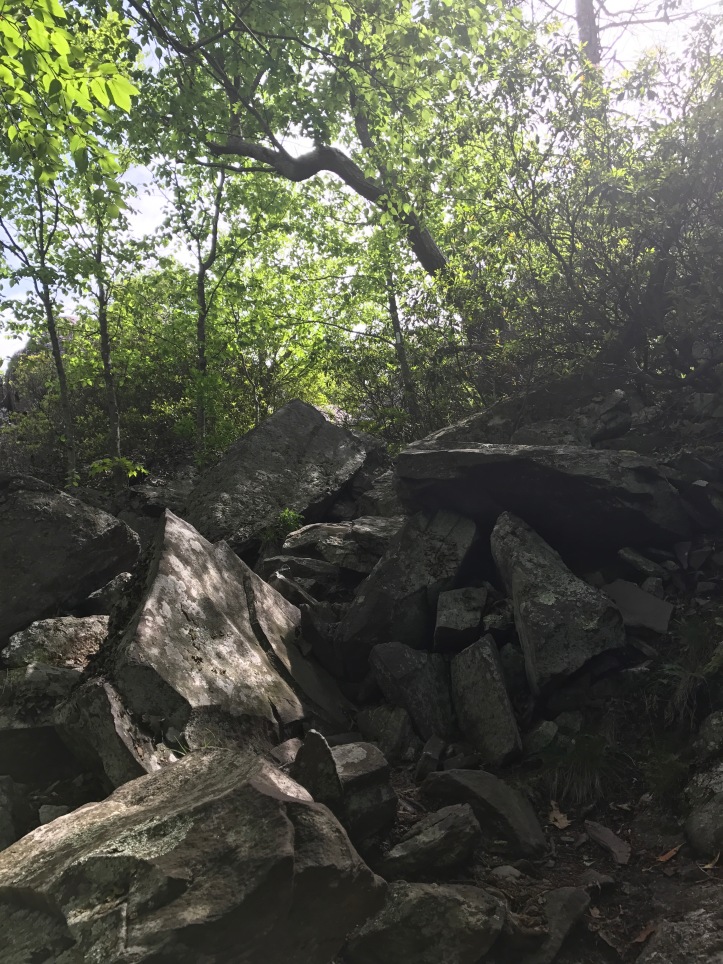 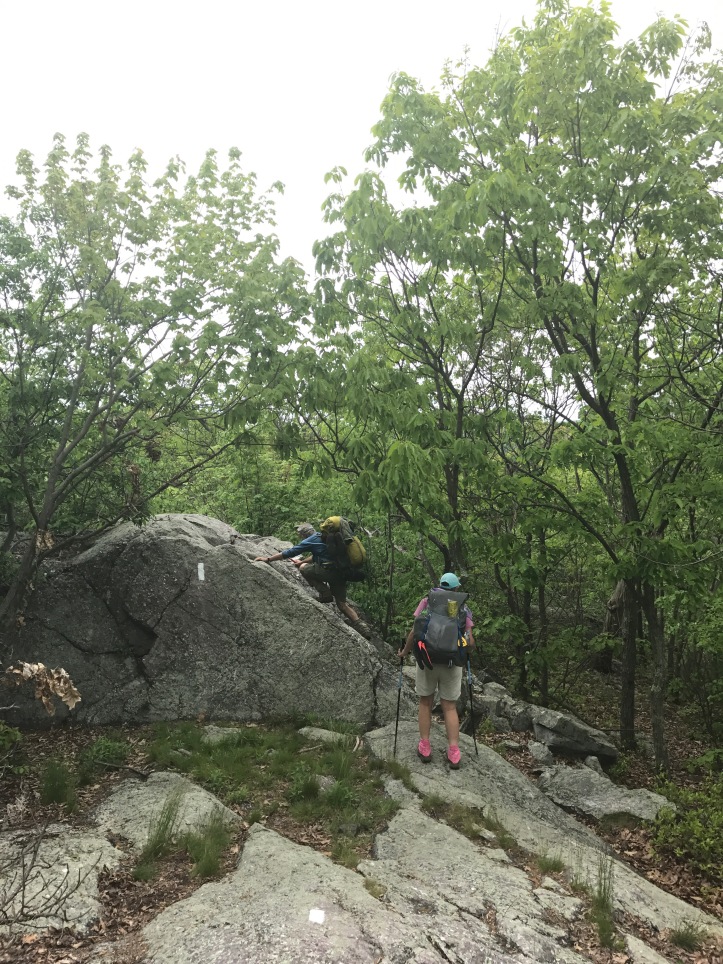 At prospect rock there is an American flag flying from a large stick. When we got to the neighboring ridge, the flagpole looked like a matchstick off in the distance. Buzzcut said holy shit we are amazing. Look how far we walked! (In reality it was like 2 miles, but it looked impressive based on how tiny the flagpole looked) its satisfying to stop and reflect on the progress we’re making. We walked together nearly all day, and it felt good to curse and laugh and share silence. 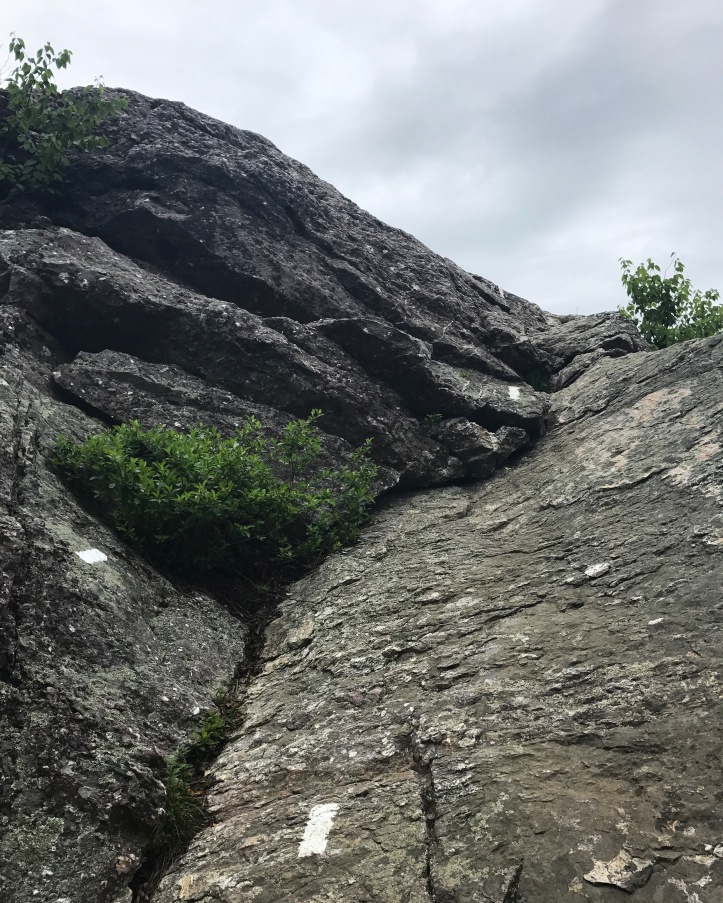 The bouldering was fun, but it did a number on my right ankle. At one point, I said aloud to the woods, please can we just have a break?? Eventually the terrain did ease up a bit and my ankle felt better. We had our sights set on eating lunch at the hot dog stand at the road crossing (and then getting ice cream), but our slow pace kept pushing the arrival time later and later. I felt determined to hold out for hot dogs, even though they’re not real food and they make me feel a little sick. I snacked all morning, and we took a few breaks to recover from the intense technical challenges of the morning.
We finally hit the power lines, which were the half mile mark for our side trail to the hot dog stand. JD caught up with us about two miles before the power lines, so we walked off trail together and talked about how we were going to eat our hotdogs. We reached the parking lot to find a very closed hot dog stand. There was much cursing. 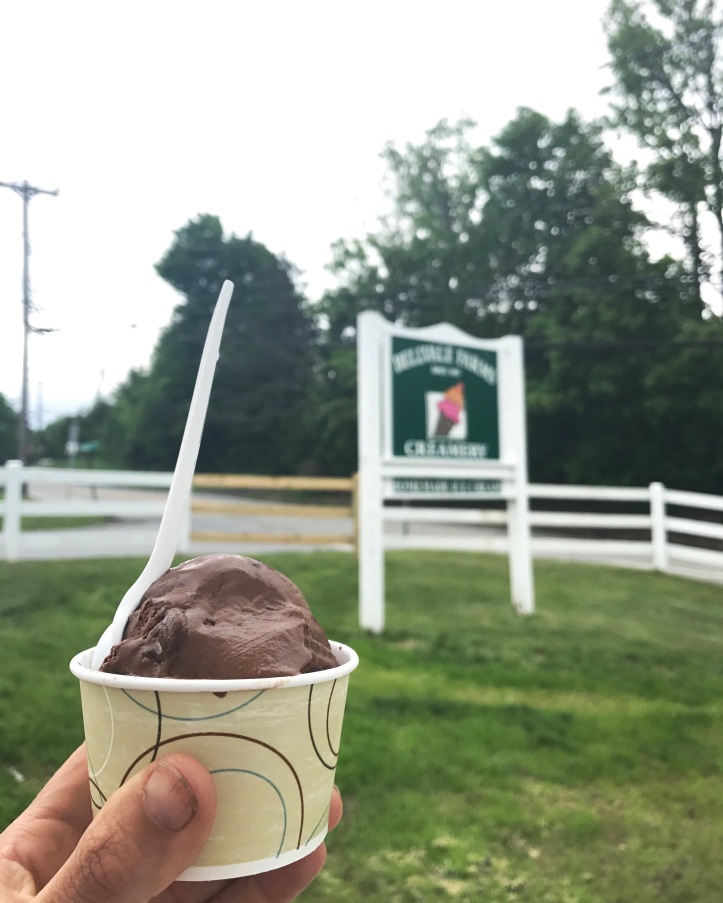 I felt insistent about getting ice cream anyway (especially because a friend told me this place was not to be missed), so we walked across a very busy two lane road and camped out at bellvale creamery.
As it turns out, bellvale is very hiker friendly. They have a charging station and a water spigot on the side of the building and a trail registry to boot. I ate my tuna fish wrap first while JD and buzzcut went straight for the sugar. As I sat there adding my frito notions, two hikers walked up and said hey cfunk is looking for you! She’s doing trail magic today (she took a few days off to spend time with her husband and skip the holiday crowds). As it turns out, cfunk who I had been texting with earlier in the day, had a trunk full of goodies: sandwich fixings, beer, cookies, chips, and baby wipes (nice touch). I took a sandwich to go, and ate bag of cheetos on site. I did not drink the beer because I’m holding out for a something special. We went from feeling crestfallen about the closed hot dog stand to the elation of charged phones, ice cream, and trail magic. Pretty incredible. I also laid on the cement wall with my right leg on my pack to soothe my throbbing ankle. So simple, and so helpful. We eventually tore ourselves away from the land of plenty and headed back to the trail. I had hoped for a continuation of the mild terrain all the way to the shelter so that I could convince buzzcut to go longer and stealth camp with me. Sadly, I did not fish my wish. There were two more sections of boulders.

By the time we got to the shelter, buzzcut was wiped but clearly ambivalent about wanting to go farther. I felt anxious about camping alone, but I wasn’t about to goad her into coming with me. So I ate my cfunk sandwich and scoured the guidebook to figure out my options. Aka dithered. It’s so hard to leave good company. So I stayed.
Had a hodgepodge cold dinner that definitely involved peanut butter while standing around with JD, buzzcut, tai chi, and the abrupt guy sleeves. Got to meet this cutie named angel who made me miss my dog a lot. 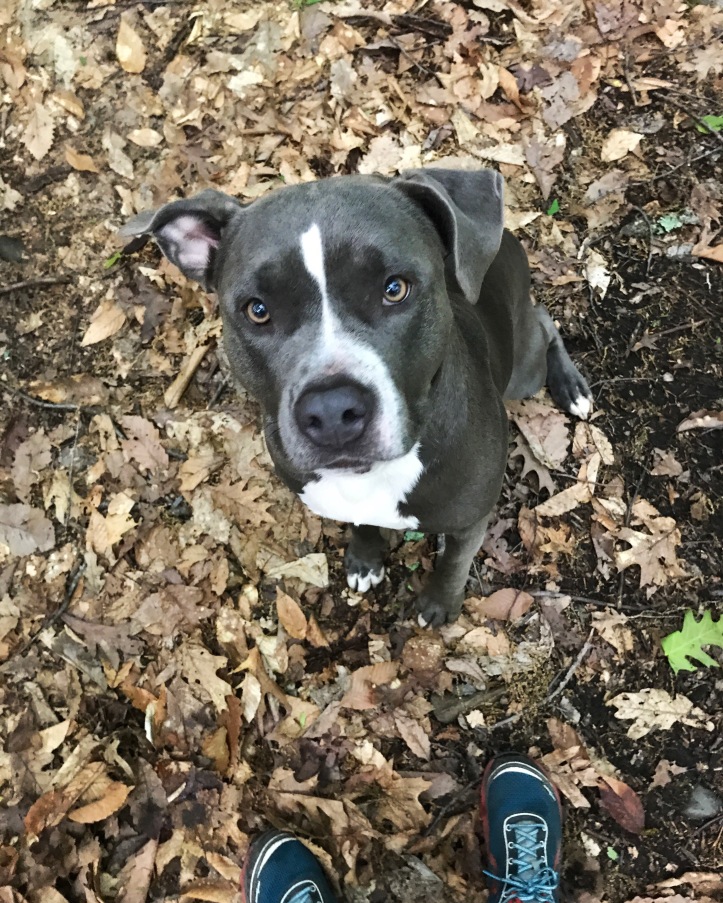 Then we all retired to our tents in waves. A few minutes ago, there was a loud commotion from the dog owner yelling hey bear! go on bear! And banging against something metal. Someone thought he was just yelling at his dog, but he was actually yelling at a bear skirting the edge of the campsite. Like the rubberneckers that we are, a small gaggle of people, myself included, rushed out of their tents and went to see the bear. I missed it the first time, but I had barely gotten settled back in my tent when the dog owner started yelling again. I rushed back into my shoes and hobbled to the back edge of the campsite (sorry mom, I couldn’t help myself). A woman named fire socks offered to make a horrible pterodactyl noise that she used to make to annoy her sister. I’m pretty sure that’s what drove the bear away. Wow. I caught a glimpse of the bear running up the hillside off in the distance.

Now I’m writing this to the sound of frogs peeping in the distance, someone blowing up a sleeping pad, and the ping of bugs against the side of my tent. No food for you, stupid mosquitoes! Let’s hope that bear decided pterodactyl girl was too frightening to come back.
Mile 1361.9 to mile 1374.1 (12.2)

Total miles: 370.9
Creature feature: around 11:15 we ran into hikers coming the opposite direction who warned us about two large poisonous snakes sitting in the middle of the rock pathway. They were still there over an hour later:

And the bear! Lumbering off into the distance.