I woke up around 5am this morning. No alarm. Just old fashioned anxiety. Every time I rolled over in the night, I could feel myself checking for pain. As I changed into my hiking shorts, I didn’t notice any twinges, which is already a big difference from when I originally broke my tailbone last January. It’s going to be hot today, so I went to for timeliness over etiquette in terms of making noise in camp. Sound carries really well and all of our gear is noisy, so there’s no way to silently move around. Even the leaves are crunchy and give away each movement. I walked down the little hill next to our site to get our food bags and felt hopeful at the lack of sharp pain. Just a dull ache. I put my breakfast together standing up and attempted to bend over as little as possible. This is one of the movements that still bothers me at times even a year later. You’d be amazed at how many camping tasks involve bending over.
Halfway emerged from his tent around 530. We had a silent breakfast together, and then we packed up as the rest of the group emerged. I had to walk back up the hill to the spring to fill all of my water vessels for the 17 mile carry we had planned for the day. I took little steps and focused on landing gently. A few twinges. After getting water, and a few new mosquito bites, I headed back down to camp and told myself to stop looking for pain. This is so cheesy, but I said “you’re okay” all the way down the hill along with “it’s just a bruise.” I did this in an attempt to stop myself from unconsciously tightening all the muscles in my lower back and my glutes.

Halfway and I left camp at 725. My fear of injury returned as soon as I put on my bag. The bag sits at the very top of my tailbone, and I knew immediately that it wasn’t going to work at that height. I tightened my shoulder straps To lift the bag off my waist as much as I could. Then I took my stress ball self down the hill to cross the bridge over the Lehigh river. 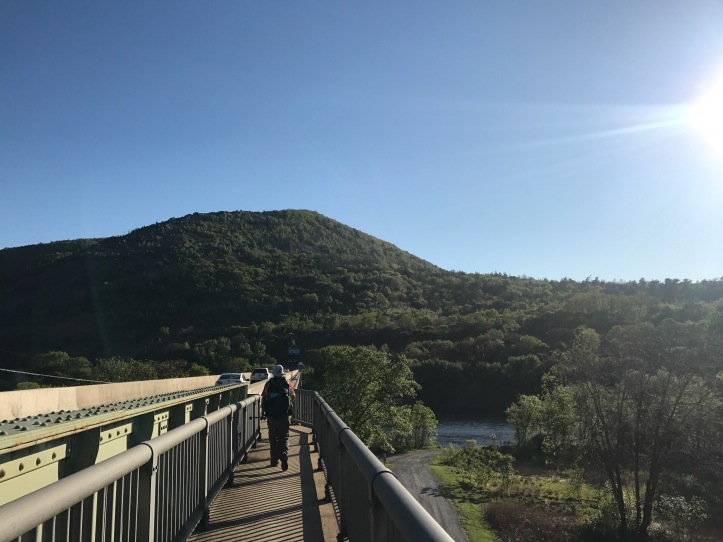 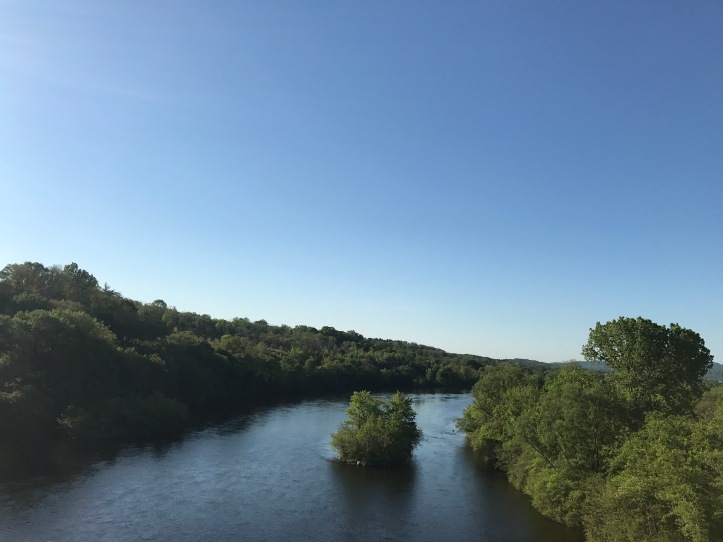 Halfway and I gaped at the mountain that we were about to climb looming over us. The elevation gain for Lehigh gap is something crazy in a small amount of distance. I’m not good at remembering or caring about those numbers. But I can say that the for first third of the climb, I felt like my Achilles’ tendons might snap in half because my feet were hitting the ground at such a steep angle. 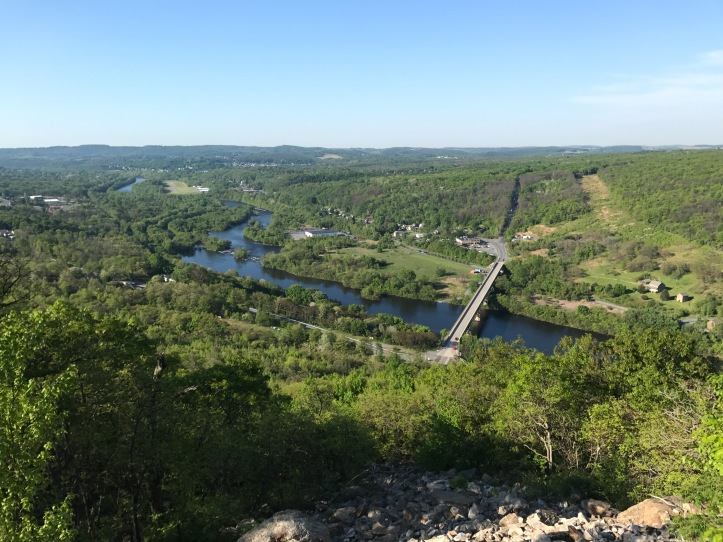 Once we got past this point, the terrain went from scrabbley tree covered path to exposed rock. That’s when things got interesting. The actual climb was that difficult, but the sheer height made it feel treacherous. A misstep or losing your balance could really end badly. I was worried that having to lean over and take large boulder hoping steps would send shooting pain through my tailbone, but it never happened. After several pain free maneuvers, I forgot to be anxious about it, and focused on the task at hand. Halfway caught a picture of me near the top of the scramble: 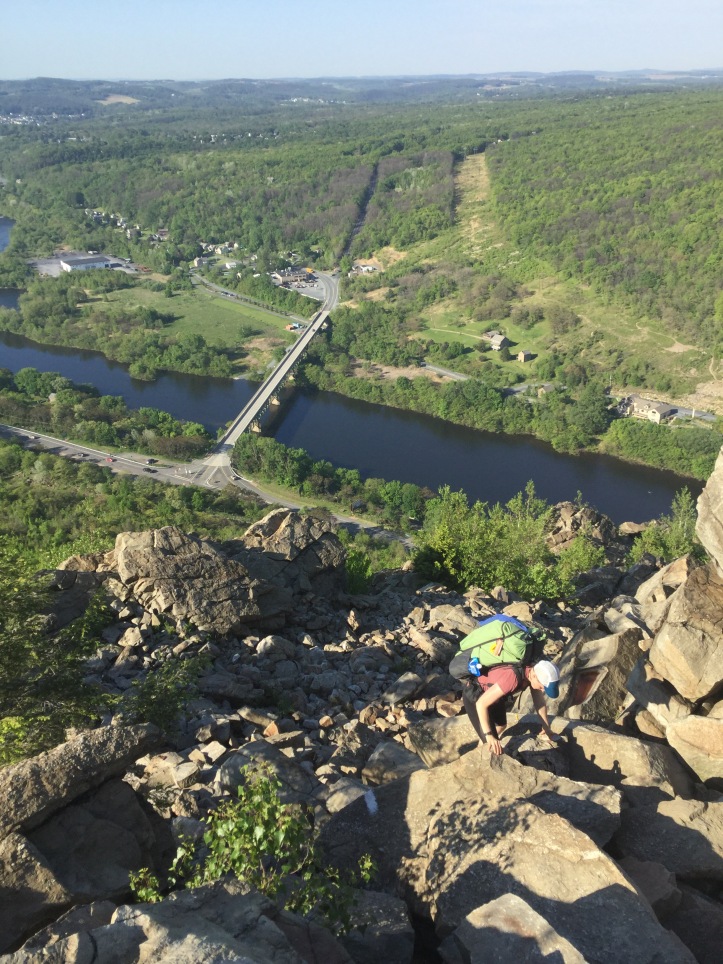 On the other side of the point, we had to scramble over rocks that looked as if they’d been shaken from a bag in the sky. Plenty of opportunities for twisted ankles and bruised feet, but I made it out unscathed with the exception of a small goose egg from hitting my shin against a boulder.

After the intense climb and the transition across the point (I don’t know what else to call it because it wasn’t the summit), the trail led us through a gradual rocky climb. As I went up the rocky ascent, I cried from the relief of not being in pain and the adrenaline of scaling the gap. The trail eventually transitioned to a bucolic walk along the side of the mountain with views overlooking dismal factories. When I got to the quasi meadow walk I let myself cry a bit and then I laid down in the middle of the trail to take a break. I also laid down on a giant slab of rock a little while later to catch a few more minutes off of my feet.

Then we were led through several exposed rocky sections, some of which sounded as if we were walking across broken plates. A German fellow I met a few days ago named hippo passed me during the noisy section and said “it’s a nice trail, yah?” But I couldn’t tell if he was serious. I followed him until he led us astray down the power line road which ran parallel to the trail. We realized the mistake pretty quickly, and backtracked. Oh the sadness of backtracking on a supposed 17 mile day.

There were a lot of people out today. Probably at least a dozen hikers. I finally met buzzcut, whom halfway knows and has been hoping to run into. She seemed to be loosely hiking with two other gentlemen named cujo and JD. Here they all are at a lunch break (along with a tired and sore halfway) later in the day.

There was a tedious mile long section of rock hopping after the power lines. Then we popped out into a gravel parking lot near a road crossing. I saw halfway laying on the ground and made a bee line for the patch of gravel next to him. 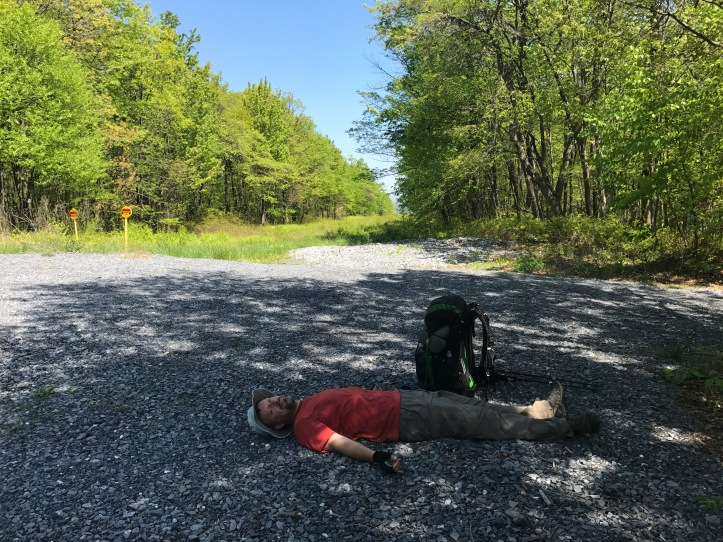 It felt surprisingly cool and the texture of the rocks was almost like acupressure. Two of the hikers next to me lit cigarettes, which was the final motivator to get moving. Halfway and I started off again. The remainder of the group was about a mile behind us. Angel was apparently not doing well with the heat and was starting to make plans to get off trail until the temperatures break later in the week.

The next section is a bit of a blur. It was rocky, and I had to continually let hikers go in front of me because I was being even choosier about my foot placement than usual. I was trying to avoid long jarring steps for the benefit of both my tailbone and my aching feet. Halfway and I had an in depth confab during our lunch break at a shady campsite alongside the trail. He felt sore and skeptical about making it 9.5 more miles to the intended shelter. We decided to call John stempa, who appears in AWOLs trail guide as someone who will let you sleep at his house, shower, and shuttle you to/from the trail and into kunkletown. This shaved 3.5 miles off of our intended 17 miles and still left room for me to get to Delaware water gap in time for my mail pickup Saturday morning. Chrissy and company were to call as well on their own timeline because they got picked up by trail angel don and taken out to lunch. I felt sad about missing the magic, but I enjoyed myquiet  time with Halfway and myself, and I know a social lunch with diner food would have been a total energy drain.
With our destination decided, halfway and I set out to cover 5.8 more miles. There was definitely a different determination in my step with the prospect of a shower, electricity, and water I wouldn’t have to filter. I sped up to the point where I had to remind myself that 6 miles is still 3 hours of walking, and I needed to pace myself. The next 2.5 hours all run together. There were a few forgiving sections, and some unfortunately rocky sections. I took a tumble at one point when my heel caught some shit kicker rock at just the right angle. Banged my knee, but no damage done and I had a good laugh about it because Halfway had fallen in nearly the same spot. I know that because I was close enough to hear the clatter and the cursing.

John picked us up at smith mountain gap road. He started talking the second we were within earshot, and I’m pretty sure he didn’t stop for more than a minute the whole time he was around. He brought his giant chocolate Doberman along for the ride, which of course made me happy. As did this little guy who hangs out at the kunkletown pub where halfway, hippo, and I had dinner with John. 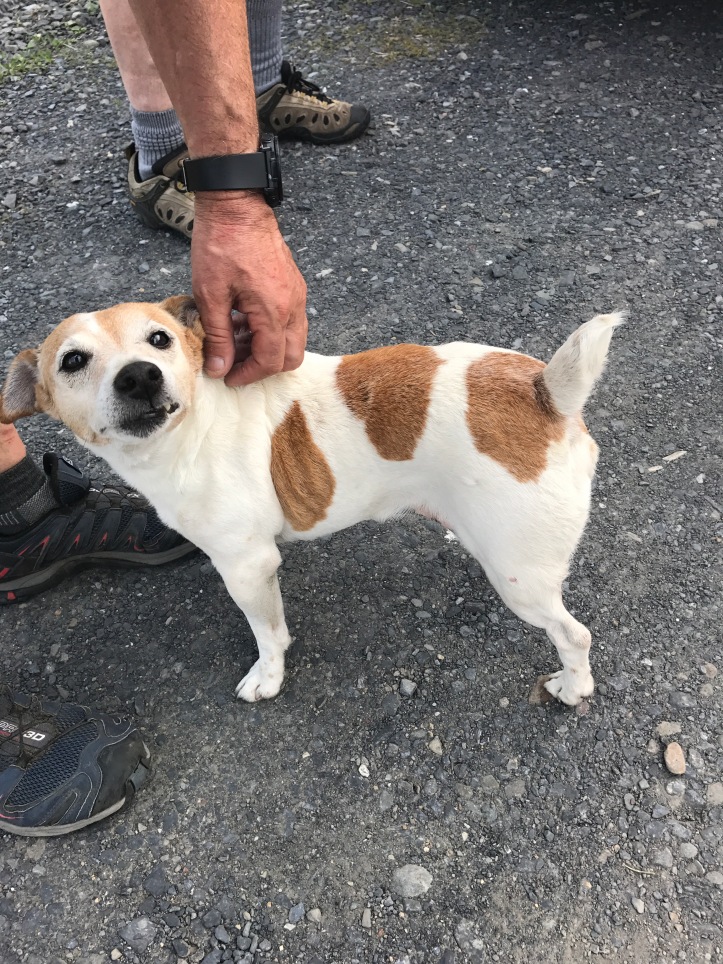 Hippo arrived about an hour after we did, unplanned and in a mysterious fashion. Two of john’s neighbors saw hippo walking along the roadside and offered to give him a ride to John’s house, but they were going the wrong way and wouldn’t listen to hippo. He thinks they might have been drunk.

At any rate, I got a good shower (complete with towel), a burger at the pub, ice cream AND BANANAS at the general store across the street and a few backup bars to help make my food last until Saturday. Chrissy and company were done around 645 and John left our dinner to go get them from the trail. Halfway, hippo and I left to wind down rather than stay for the other half of the group to eat. The garage where we had the option to sleep was littered with millipedes. There was also a wolf spider on the wall when we first got there. So I’m writing this from the comfort of my tent, which is set up in john’s backyard. I can hear what I think is a great horned owls low hoot in the distance and the patter of bugs skittering across the surface of my tent. I’m relieved that my tailbone seems okay enough to continue, and I’m really excited to be out of PA soon!
Mile 1257.1 to mile 1270.0 (12.9)

Total miles: 266.8
Creature feature: I nearly put my trekking pole down on a snake today. It had tan stripes, but it wasn’t a rattler. It reared up and slithered away after I made a sharp inhale after nearly touching it. I also saw a scarlet tanager! Which I’ve been hiking to see for like two weeks. They’re incredible. So vibrant with intense red bodies and black wings. Halfway saw a timber rattler, but I sadly have not seen a rattlesnake yet.