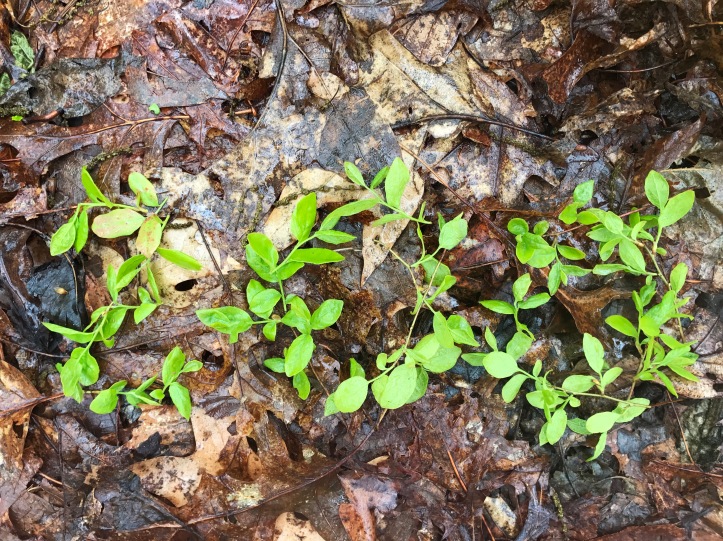 I woke up to the sound of rain hitting the tin roof of the bunkhouse and the NOBO microwaving coffee. No part of me wanted to get out of bed, and even less of me wanted to be cold and wet. Around 6:45, the owner popped in and said breakfast would be on their porch. I put on a few layers and grumbled to myself as I crossed the driveway through the drizzle. There were 9 hikers total. 3 other NOBOs stayed in the basement accommodations, arriving at some awful late hour (in hiker world) after hiking 30 miles or something crazy.

I brought my Greek yogurt, banana, and granola to breakfast in an attempt to eat something my body is used to. I sampled the egg and sausage casserole to be polite and grabbed a muffin for second breakfast because calories. I didn’t stick around after I finished eating because my hands were getting cold and starting the day cold is no way to go.

Around 9:45, 4 of us piled into the owners giant pickup truck and got a ride back to the trail. The owner gave chrissy and me hugs, and then he said “come on in for a man hug” to the guys in the group. Good thing he labeled it manly. Who knows what might happen.

It felt so great and so strange to be on trail with just my little sea to summit day pack. I had food, about 1.5 liters of water, and some emergency items, and it felt like nothing. Almost immediately after setting out, I hit my 200 mile mark. Stopped long enough to fashion the headlining picture for today and then scurried northward. My hands had already started to freeze in the 4 minutes it took to set up the leaves.

I spent the entire day in the middle spot between speed racer Halfway, who I couldn’t keep up with even though he had his full pack on and chrissy, who, as it turns out, is slower than me without her pack. I listened to music almost all day to console myself for being wet and cold. And it was indeed cold. It never hit 50, and my hands were so sad by noon. I was trying hard not to put on my wool gloves because I wanted them to be dry for camp later, but I just couldn’t do it. I also could barely bring myself to stop and get snacks or water out of my bag. I walked and ate the things that were easy to carry.  It’s to self: for gross days pack walkable snacks. I couldn’t eat things that were in baggies because I couldn’t stand still long enough to take a break. My emotions were all over the place. Rapid cycle style where one minute I was crying over the usual sad things and then I saw a beautiful flower and heard frogs and felt serene. Pinball machine kind of day.

The terrain today was mercifully flat with the exception of one short, steep climb:

And a verrry long descent down into port clinton.

We were told it would be hellacious, but it didn’t compare with the elevation changes we saw last year in New Zealand. I kept waiting for it to get worse, and then it was over. With the mild terrain and light weight, I was able to cover ground pretty quickly (for me). I tried running in a few places, but my feet were too cold, which made for clumsy foot placement. The flatness also tired out my shin muscles, so I stopped “prancersizing,” as chrissy dubbed it, almost immediately.

I was doing really well in terms of wet feet until about 4 miles in when I misstepped, and my whole right foot got submerged. There was definitely some swearing. Shortly after that, my left foot got soaked. Here’s an example of some of the puddles we had to find our way around: 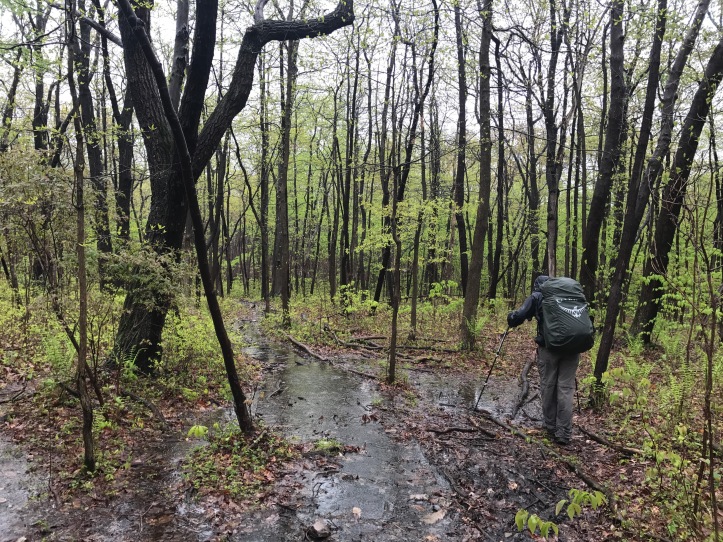 The guys in the bunkhouse this morning were commenting on how it’s easy to cover big miles around here because there’s not much to look at. It’s true that the views over the last 60 miles have been infrequent and repetitive (oh look, there’s that same valley we’ve been peering down at for 2 days). But the woods themselves are full of great sights. For example, I spotted 7 lady slipper orchids today. 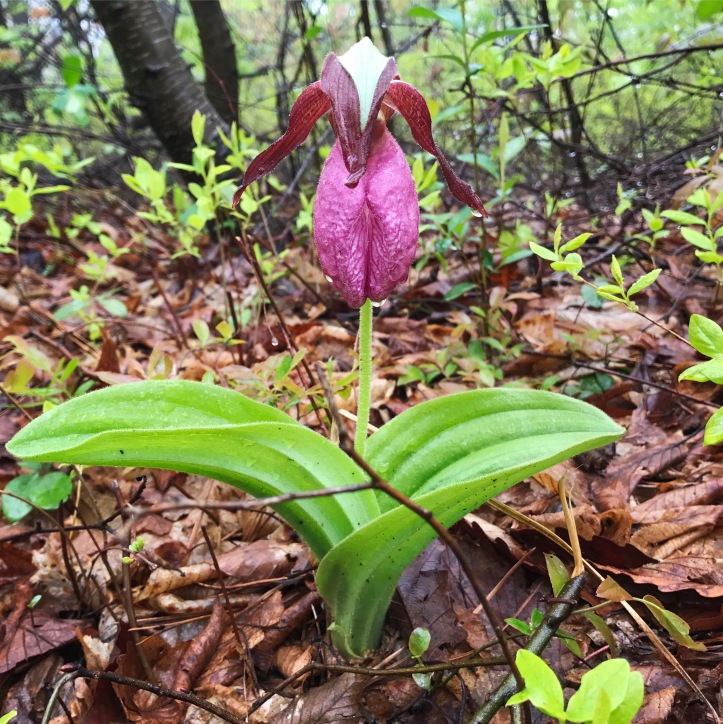 And the azaleas (or is this rhododendron?) are started to creep out a bit more.

I also went through a controlled burn section that felt ominous and made for a strange scene. Charred slick brown on the bottom third and bright new green in the canopy.

I ran into halfway around 130. He looked pretty miserable because of the temps. Neither of us took a real break the entire day. Chrissy ended up walking an extra .6 of a mile to get to a shelter around mile 6 and stopped there for lunch. I think the nonstop walking made my back a bit achy, but my feet never really started hurting today. And once I stopped prancersizing, my shins didn’t act up either. It’s easy to see the extra stress incurred by carrying 25-27 pounds on my back.

Halfway and I kept running into each other, and we ended up making the descent into port clinton together. Chrissy called me as we set foot on the running path at the bottom of the supposed hill of doom. She sounded a bit frantic and was apparently really cold. I assured her she was not lost and that she was only about a mile behind us. Then Halfway and I slowly made our way into Port Clinton, crossing the Schuylkill River in the process. 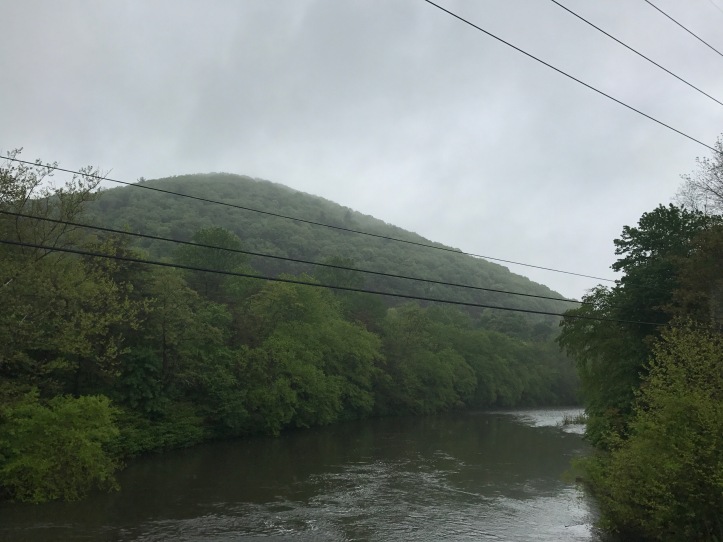 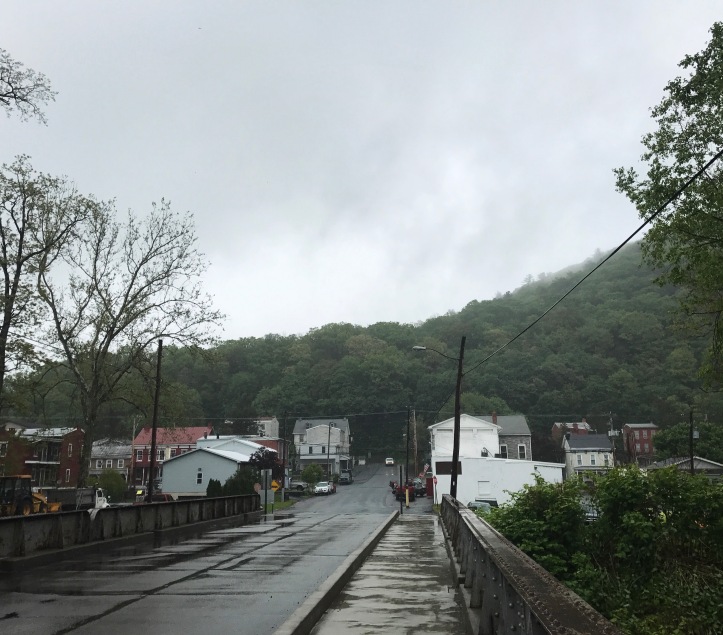 As soon as we took a left to head north towards the pavilion (our intended “camping” spot for the night because you’re allowed to sleep there), we ran into this rousing display of trump support:

I’m already a bit on edge in small towns, so this sent my red flag meter much higher. It made me feel even more interested in the offer to sleep on Jimmy’s hotel room floor. Apparently, he got too cold this morning and decided to get off trail early to warm up at a hotel in Hamburg. He invited the 3 of us to crash there given the dampness and cold temperatures on tap for the rest of the night. Part of me felt pretty happy about the prospect of not sleeping in an open air pavilion in 40 degree weather after having been wet all day and part of me felt guilty for yet another night in a hotel. But the trump stickers and Frontpocket’s description of the pavilion sealed the deal.

But I’m getting ahead of myself. First, there was a meltdown at the Port Clinton hotel. Poor chrissy was so cold and past the point of functioning when she arrived. I’m guessing she was in stage 1 of hypothermia because she said she couldn’t think straight (e.g. she didn’t think to check her phone when she got into town and she was standing on a corner with no clue how to find us). Her hands were puffy and white, and she totally lost it for about 5 minutes. It’s hard to know what to do when someone you’ve known for all of 9 days bursts into tears. Lucky for me, I’m used to people I don’t know crying. She got a phone call as I was suggesting that we go inside and get a hot drink. The phone call came from frontpocket! His wife came to visit him this weekend, and he was calling who he thought was me to reiterate that we should stay with jimmy. When chrissy answered the phone in shambles, he and his wife drove over to be supportive. We all stood in the bar of the hotel and talked for a few minutes. The flavor of the crowd in then bar didn’t do much for my sense of security. Another vote for hotel.
As we stood around sipping tea and eating beige bar food in an attempt to get calories while figuring out our plan, the hostel owners son arrived with our packs. He’s an easy going college kid who was more than happy to take us to Jimmy’s hotel in Hamburg. That cinched the deal, and that is where I am writing this post. 5 hikers in one hotel room. It smells like dirty socks and icy hot (care of chrissy). Let’s hope Halfway doesn’t decide to cut down a forest in his sleep.
Mile 1203.0 to mile 1217.6 (14.6)

Total miles: 214.4
Creature feature: I saw a few birds here and there, and heard more, but it seemed like most of the animals were hunkered down today. Can’t say I blame them.