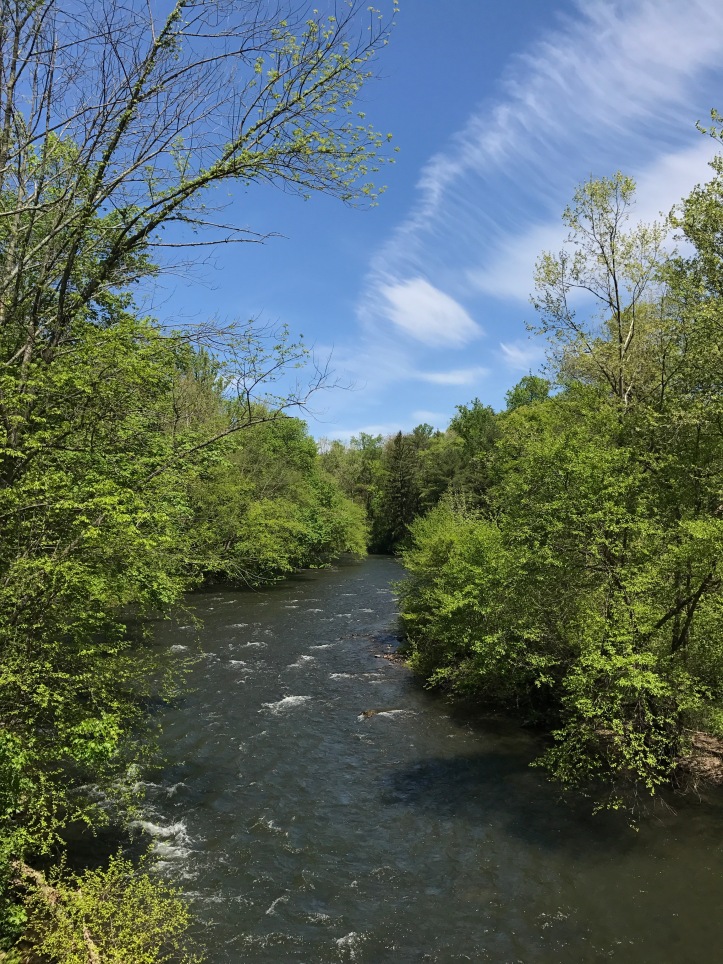 Woke up to less harsh temperature this morning, which made breakfast more enjoyable. We all gathered around the fire pit and put together our personal concoctions. Jimmy was the first out of camp, and I followed about 10 minutes later.
I felt sad this morning. Desperately wanting to be both in the woods and around people who know me (and could give me a hug). After a couple of miles, the evergreens switched over to mostly deciduous trees. The extra light coming from the higher tree canopy and the birdsong helped distract me from the mental heaviness.

About 3 miles into the day, I came to the only reliable water source for the day so I decided to drink a bunch of water and fill up for the rest of today’s mileage. Zack caught up with me at this point and we had second breakfast together on a rock. 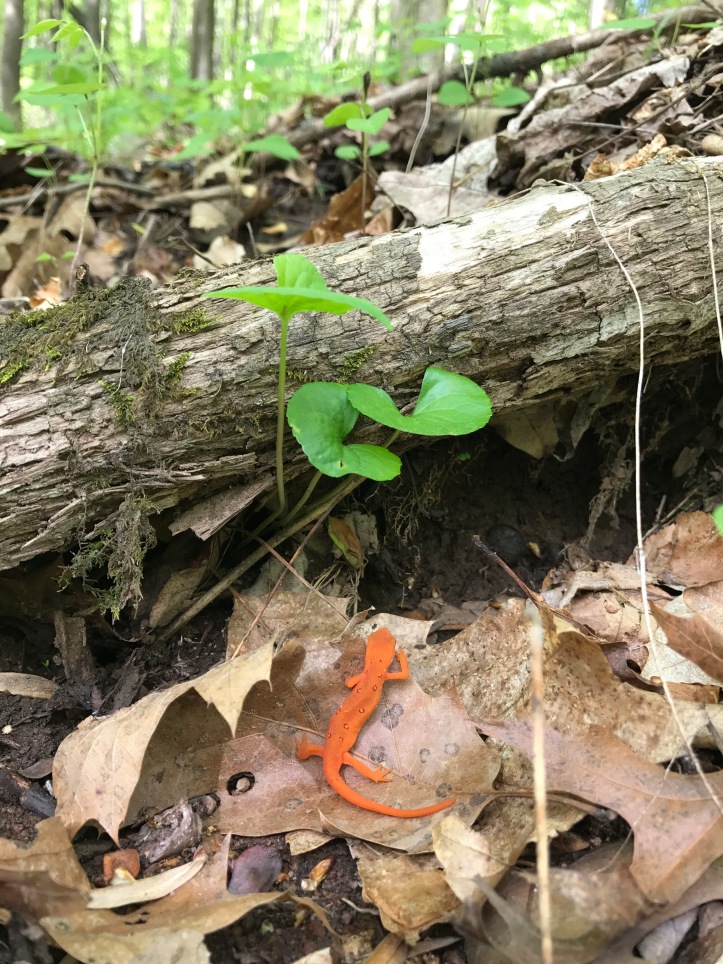 While I was filtering water, I saw this little guy and I took a picture for halfway because he’s been hoping to see the salamander.

Lucky for him he came down the hill not long after we stopped, and I pointed out our little orange friend to him. He was so excited. Zack and I moseyed on, which is to say we started walking together for about 20 seconds and then Zack pulled ahead around a corner, and I didn’t see him for another couple of hours. Not too long after the spring, I popped out into this field, which smelled so sweet and was a really great change from yesterday’s tunnel of rocks and poor drainage. 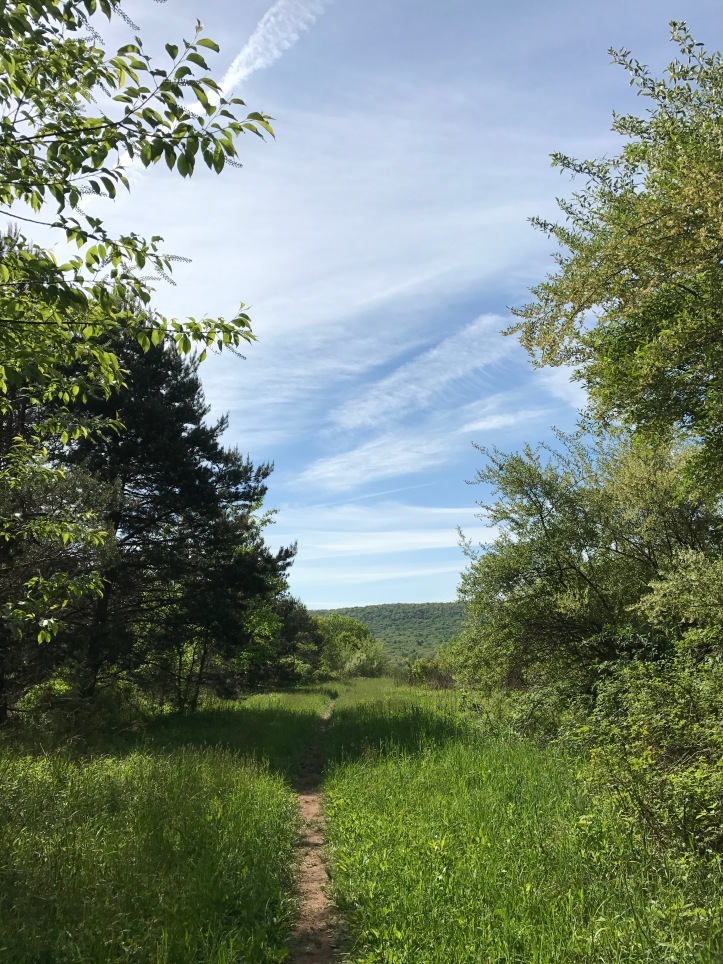 I savored the sunshine while twisting my hat sideways to cover my sad ear. After a road crossing we dropped into Swatara state park, which started out with a little brook running way down the hillside and dappled shade cast on ferns lining the path and birds swooping about. Here are a few pictures from the park: 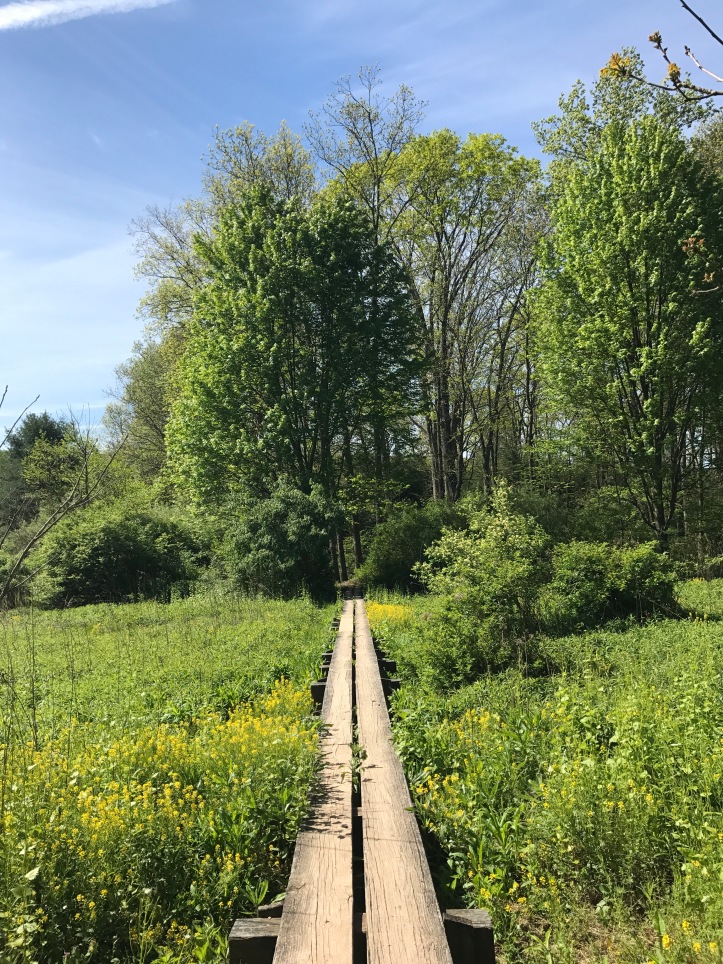 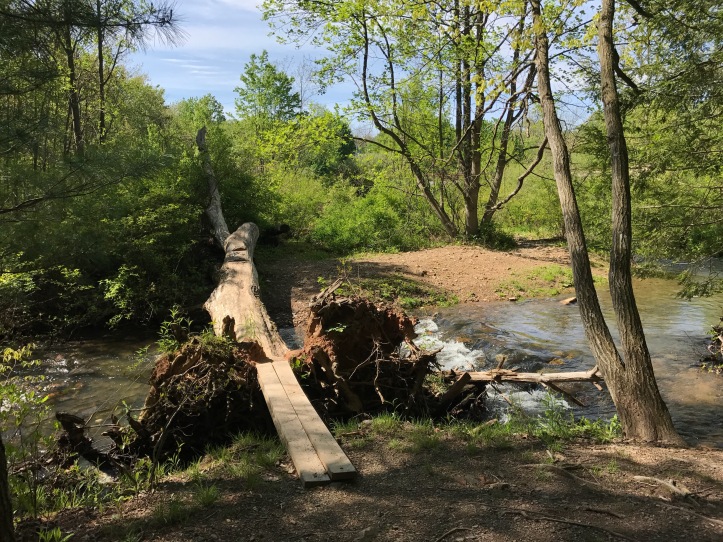 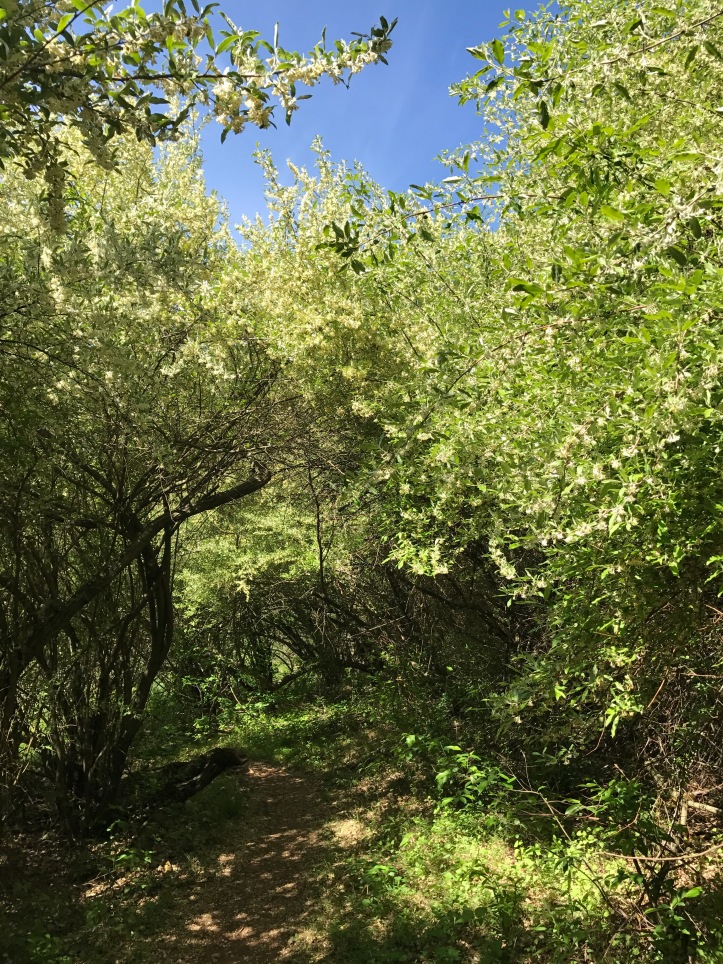 I ran into halfway and jimmy discussing birds towards the edge of the park boundary. We walked out together and came upon this beautiful iron bridge that crosses swatara creek: 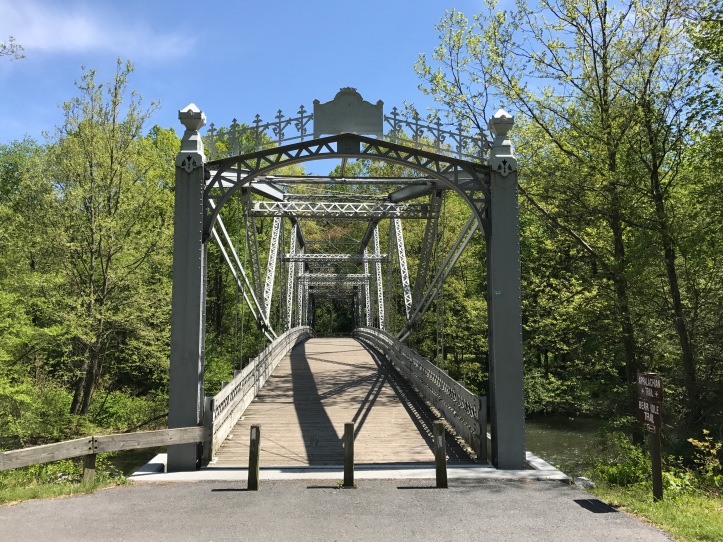 After the bridge, the trail takes a hard right and goes underneath I-81 and then hugs an overgrown bank just below a gravel road. 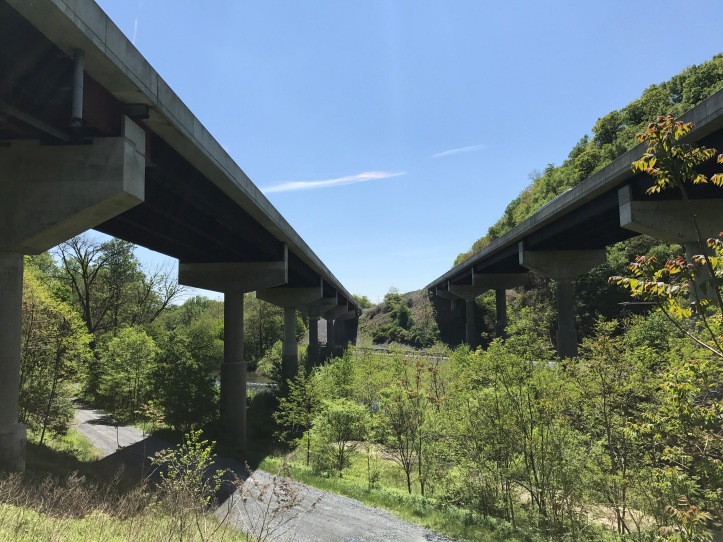 A dopey yellow lab came running seemingly out of nowhere until I saw a woman walking on the road above me. I felt like I was walking through a tick infested drainage ditch.

About 10 minutes later, I came to a campsite where I stopped to have an odds and ends lunch because I’m out of wraps to make a proper vehicle. Halfway passed me while I was polishing off a probar covered in peanut butter. I zombied out on the internet for a few minutes and forced my to keep walking around 1215.

There was a hefty climb from my lunch spot to the ridge. About a third of the way up, I saw my first snake of the trip. I heard a rustle that seemed different than a bird and looked up to see a garter snack wriggle off the trail. I saw what I think was a black racer about an hour later. That snake was huuuge and moved fast from one side of the trail to the other. Then it stopped about 10 yards off trail to stare at me.

Walking along the ridge ranged from storybook flower dotted sections to ankle breaking boulder fields that look like this: 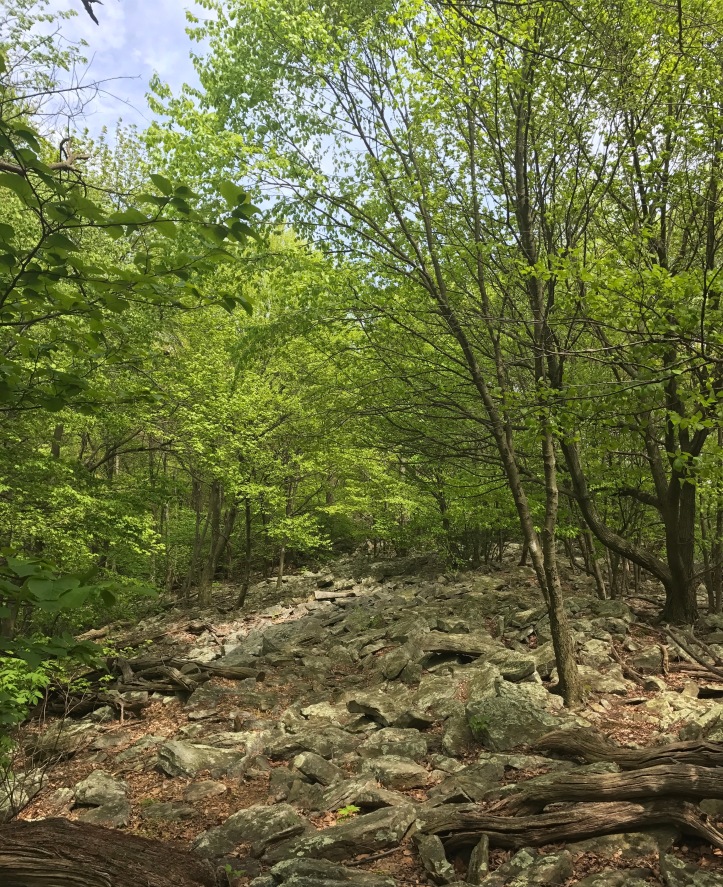 With about 5 miles to go, I ran into halfway sitting on a log looking a bit haggard. I think everyone struggled with today. 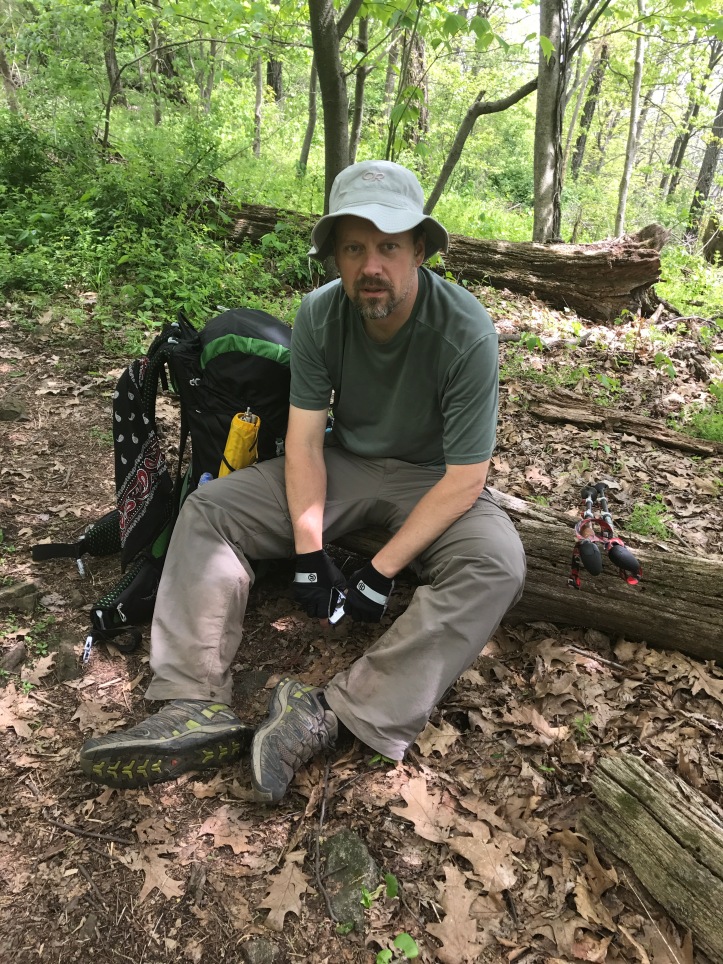 The rocky sections were longer, the climbs were in full sun, and we’ve been hiking for 7 days straight, mostly low double digits. Right before seeing halfway, I had checked my gps and felt shocked at how much more I had to go before our destination. So I slowed down and tried to pay attention to birds and flowers instead of how much my feet felt like hamburger. Here are a few of the sights: 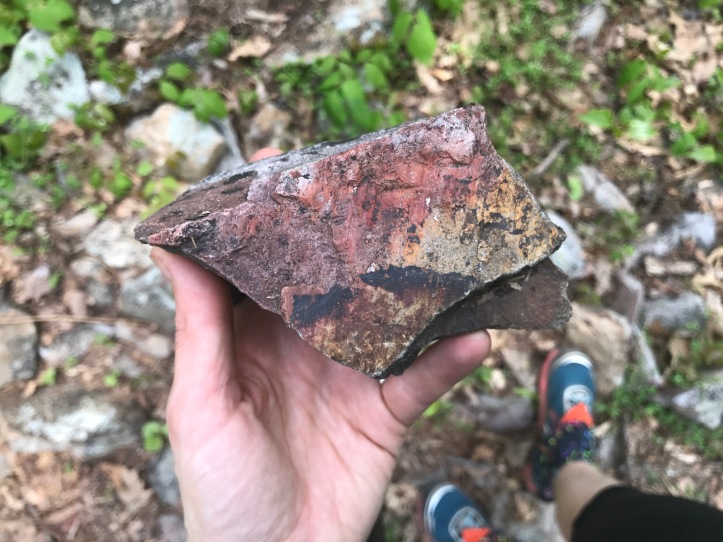 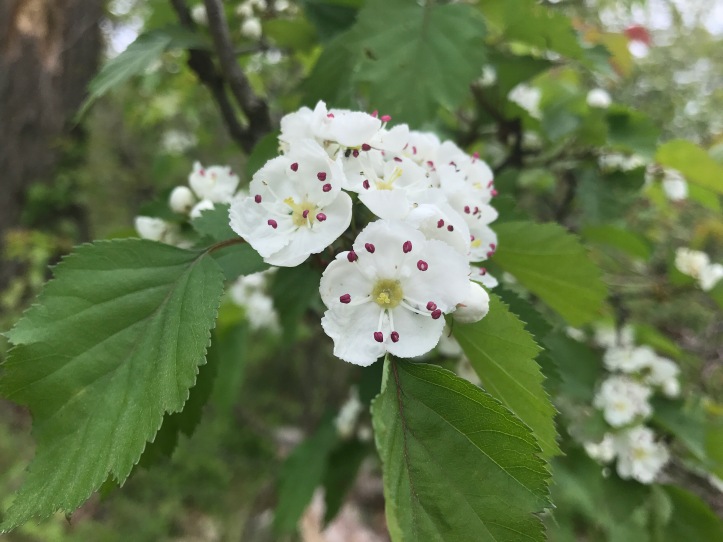 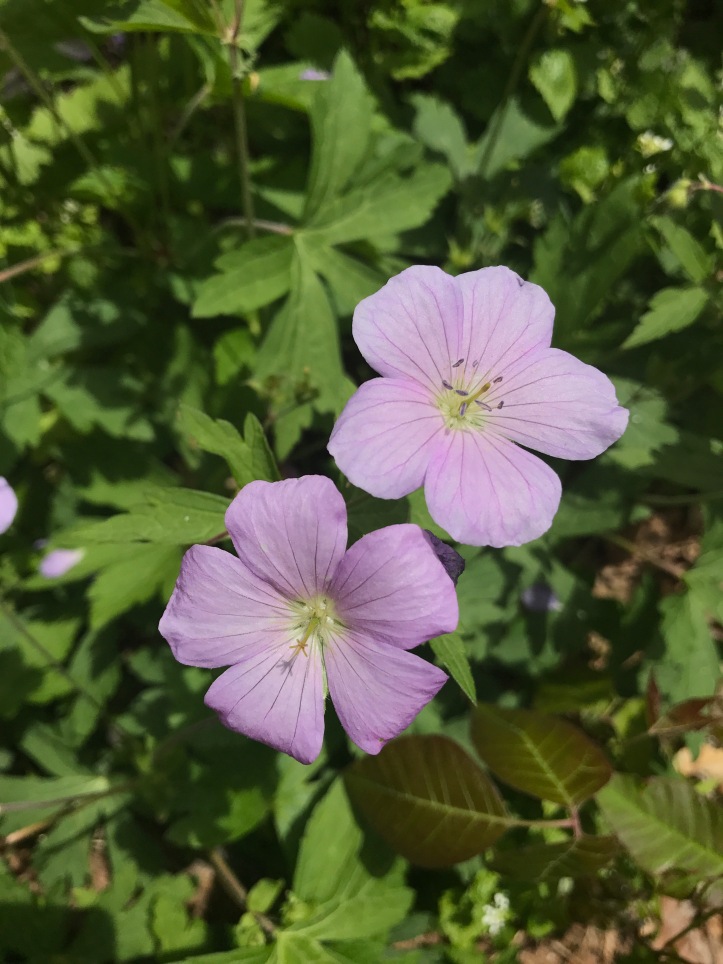 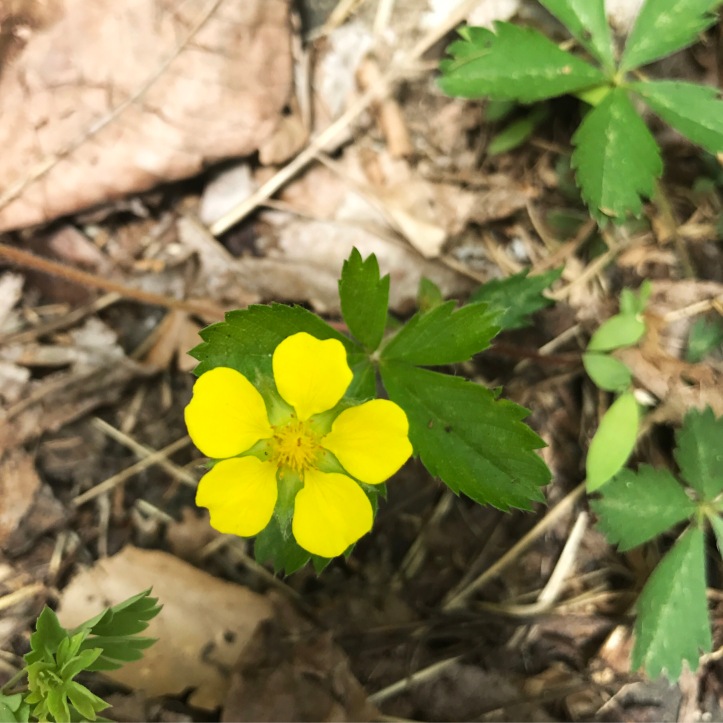 The boulders finally subsided into a flat walk with the occasional section of stealth foot biting rocks the size of golf balls hiding underneath the leaves. A fellow who is walking the trail somewhat homeless came along behind me, as did Chrissy who I hadn’t seen since camp this morning. The guy, whose name I’m omitting because I don’t really know his story or desire for anonymity, had a guitar with him, so we talked about music and banjo playing and how happy he is out here in the woods.

After what felt like forever, I finally got to the campsite for the night. Jimmy had been here long enough to set up his tent and start a fire. Long legs, that guy. I felt inconsolable and hungry and annoyed with the task of emptying/rinsing my period cup because it meant that I had to use the last of my water on that and would have to filter water before eating. First, though, I had to set up my tent. I picked a so-so site and set about clearing debris. I pried a sizeable rock out of the ground and unearthed a muddy hole teeming with red ants. That was the end of THAT tent site. Me and red ants have history, and I don’t care how sealed my tent is, no way I’m setting up above the lions den. So I moved to a less desirable and more root filled spot by the fire. 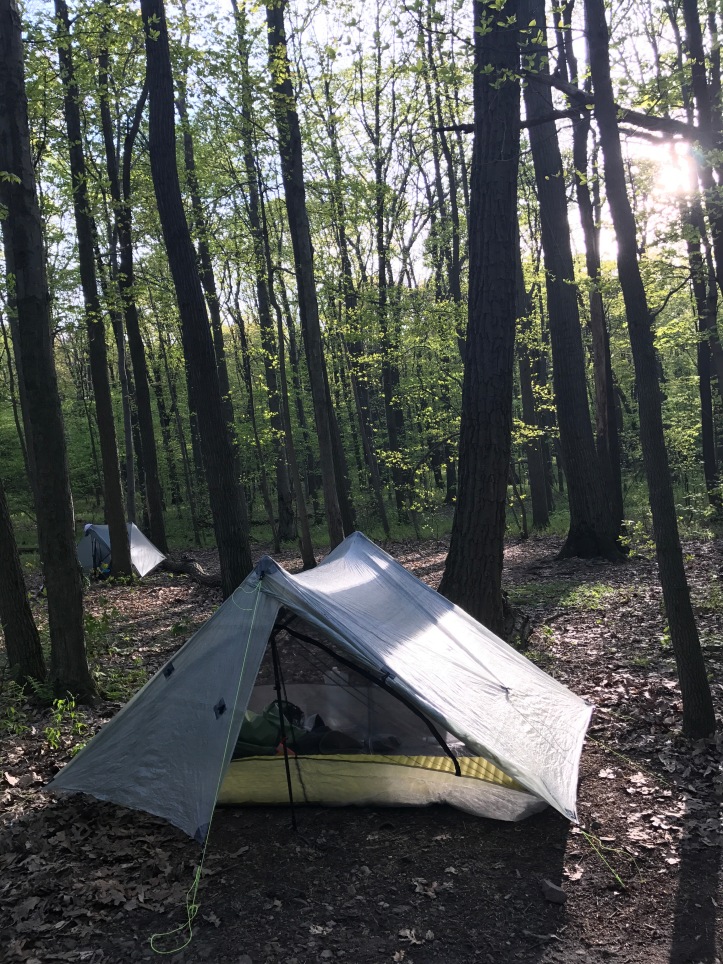 I muttered and whined in my head and got through my chores. Then I made a very unsatisfying pasta side for dinner. It tasted bland and left my stomach feeling like glue. Poor zach is low on food and his hiker hunger hit today, so I shared some of my extra snacks with him. Whatever he eats, I don’t have to carry!

An older gentleman set up camp and decided he should hang his bear bag practically over my tent. He also took no social cues and proceeded to yell questions at us across the campsite as he put his tent up. Everyone else seemed more tolerant of him, but all I could hear were his attempts to sound important and smart with little in the way of curiosity about others. No thanks. I steered clear of follow up questions and scurried into my tent. At one point, I made the mistake of weighing in on something from my tent and he walked over and talked at me standing with his face in the netting. Tooo much. I’m not sure I’m cut out for the shoot the shit aspects of trail life. In small doses maybe.

A few people in their mid to late twenties rolled in around 7. Hikers that have been going since bland, VA so they’re putting in high miles and long days. They talked by the fire right next to my tent, and I was worried I would have to listen to “dude listen to how drunk I got” stories until real midnight, but hikers are a tired bunch and they didn’t have alcohol (thank you, weird PA alcohol laws), so they retired to their tents at like 9p. And now I should sleep too. Feels like bugs are crawling on me which means it’s shower time. Hostel tomorrow night! Laundry, resupply, electricity at what looks to be a cute little place.

Creature feature: the snakes previously mentioned and a bunch of interesting birds, most notable being a towhee, which has a striking black cap with a white and rust colored chest and an oven bird, which is a light gray with a white pinstriped chest.