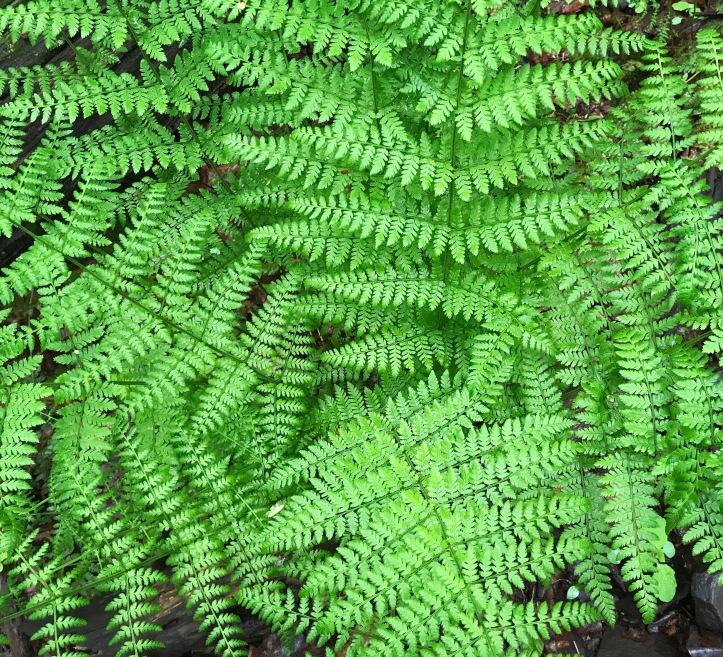 I woke up with a start to the sound of Chrissy leaving the hotel room. Looked at my watch and it said 655, which is officially the latest I’ve slept in about two weeks. I made myself mini waffles and slathered peanut butter on for protein. It seemed like a good idea, but I felt sick the minute i finished eating. Gluten and sugar just aren’t my friends no matter how many miles I hike. I was packed and ready before everyone else. In an attempt to avoid falling back to sleep, I set out from the hotel while they gathered themselves.
After a dismal but short road walk, I followed the trail north to the sound of transfer trucks and power washers. I heard man made noises nearly all day today. About 20 minutes later, the trail popped out into fields and across highway 81. Thankfully it wasn’t raining, but I’ve still decided I really don’t like walking through fields. I amused myself by watching redwing black birds dart around, occasionally alighting on the trail marker posts. Japanese honeysuckle bushes drooped with blooms and made for a sweet smelling walk. 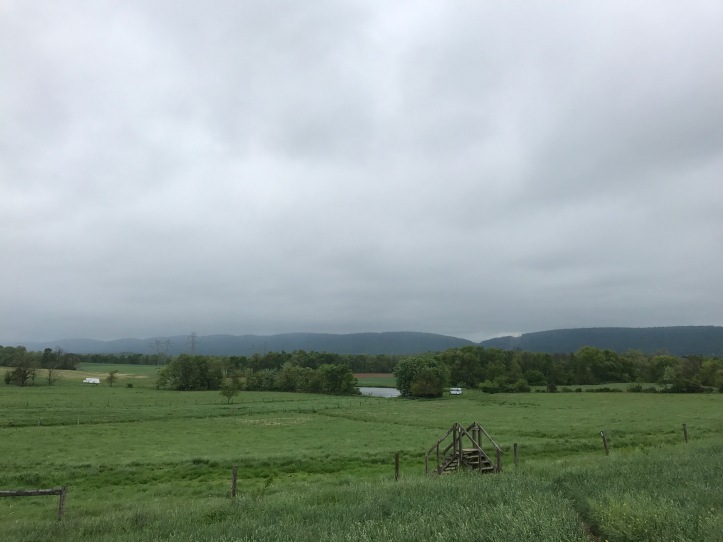 Eventually the trail went back into the underbrush and crossed a series of little drainage ditches next to a swollen, muddy creek.

I came to a U-turn trail blaze just over the bridge that crosses the creek. When I got to the bottom of the bank, I came to this washout:

My dad made a joke about quacking like a duck yesterday, but I wasn’t about to float my way through that. I turned back around and went over to the ATC center at Scott Farm where the guy told me to take the Blue Blue blaze that goes just past the flooded section. There was a giant porta potty with TP and two water pumps outside this barn. 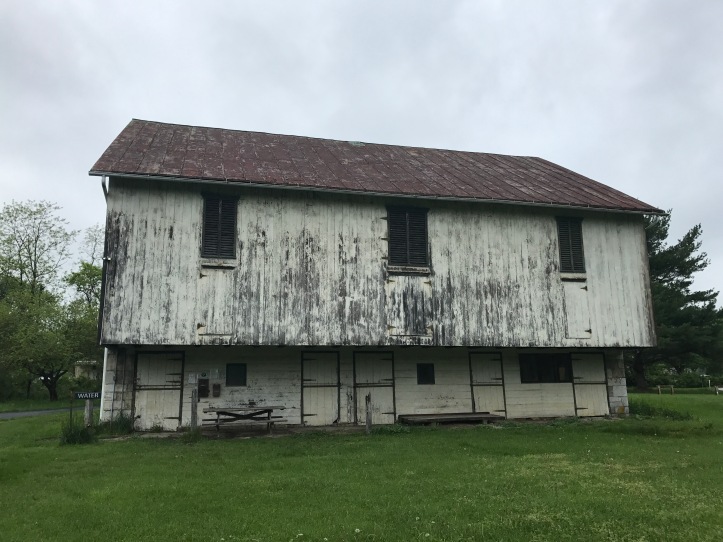 Jimmy arrived right as I was filling my water. We walked together through the marshy low lands that involved a series of little bridges and wooden planks. Shortly after a road crossing, it started to drizzle, which was a bit dejecting given yesterday’s never ending sogginess. Jimmy pulled ahead for a while, which left me to my thoughts. I’m feeling sad today because I have been thinking about the end of my relationship and the losses that come along with that for both of us. My hormones are also raging because, TMI, I got my period this morning. I was crying and walking when I heard a hello off to my right. There sat Jimmy eating a snack on a wet log. I wiped my face and joined him for a short break where I had the treat of a hard-boiled egg that Chrissie bought me at the flying J truckstop down the street from our hotel. Because of the damp weather, we both got cold quickly, so we didn’t sit for long. He pulled ahead again, and I slowly picked my way through the wet rocks. There was a nice little climb just after this rusted out car. tractor? I didn’t investigate too closely.

About three quarters of the way through the climb I came upon this view of the valley. 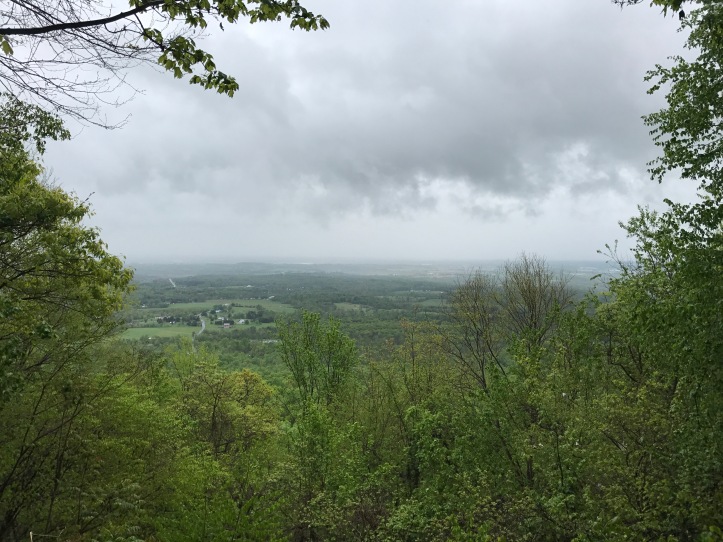 By that point Chrissy had caught up with me and had a fellow named Trev in tow. We also ran into the kid named Zach who stayed with us at the full shelter two nights ago. Has a quiet, amiable energy that I really like, and I’m 99% sure he’s gay which makes me want to look out for him and is a nice break from only straight people thus far (no offense to my straight friends/family).

After the climb, came a brief flat stretch followed by a gradual downhill wind with happy little ferns. At the bottom of the hill, I passed through more ferns to the sound of frogs off to my right.

I ran into jimmy and halfway at a dirt road crossing. We stopped for a snack, but after about 3 minutes of enjoying ourselves,it started raining harder. I can’t stand still for long when it’s damp and cold, so I kept moving. The trail took us back out to a blasted open field. They might seem peaceful in the pictures, but they’re a slippery muddy mess, and I nearly fell a half dozen times. 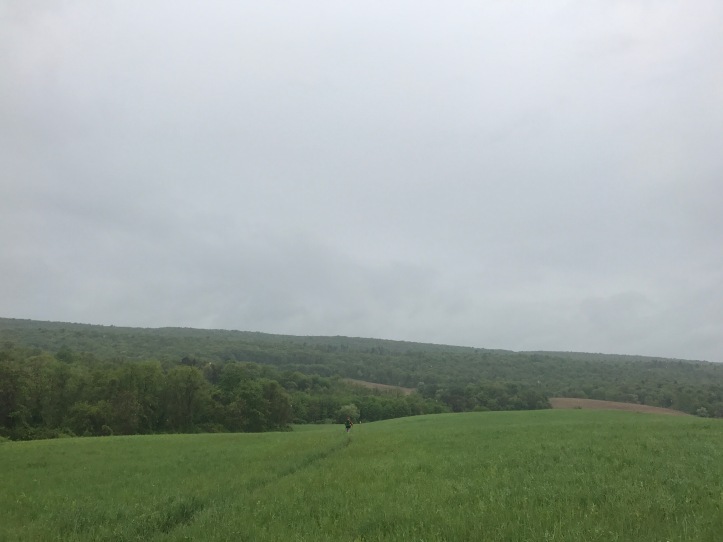 The uneven ground also rubs my feet in a way that makes them sore. With one more field to go, we came across trail magic! Care of Steve and Wendi Burton. Homemade oatmeal cookies, soda, water, and crackers. Zach was already there enjoying the spoils. Here’s a picture of our soggy group. 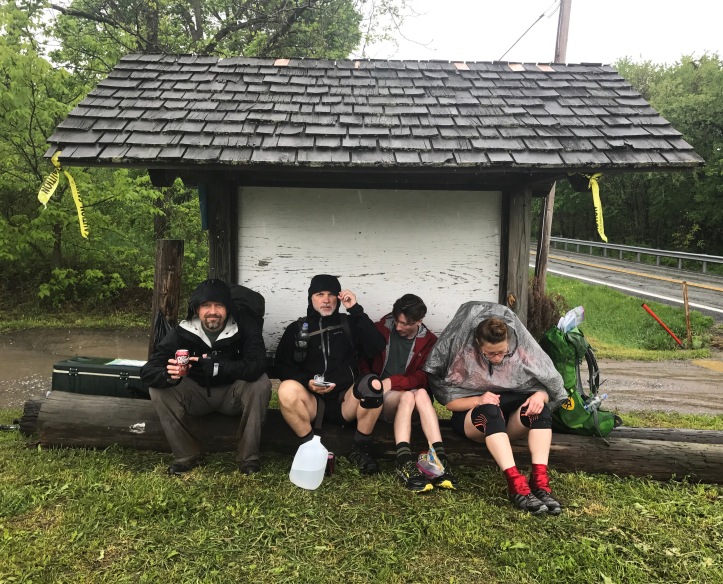 After the final field, we headed back into the woods and spread out to our respective paces, which basically means I’m towards the front for awhile until everyone passes me. My legs felt pretty good today once I got through the road walk at the beginning. Definitely a few twinges in my shins, but I continued to lift my leg from the hips and use my glutes on the hills. Bored with biomechanics and hiking descriptions yet??

There was a steep half mile climb with about 3 miles to go. Then came the rocks. My pace slowed to a crawl, and I started to get pretty cold. At that point my feet had been wet for hours. I felt dejected by my slowness and fuzzy in the head. I forced myself to stop and put on an extra layer and eat something. Then I talked to myself and obsessively checked my distance from the shelter. I was worried about hypothermia, but I imagine my fuzziness was mostly a matter of walking 14 miles in soul sucking weather. About a half mile from the shelter, I looked up and saw this seemingly out of place plant. 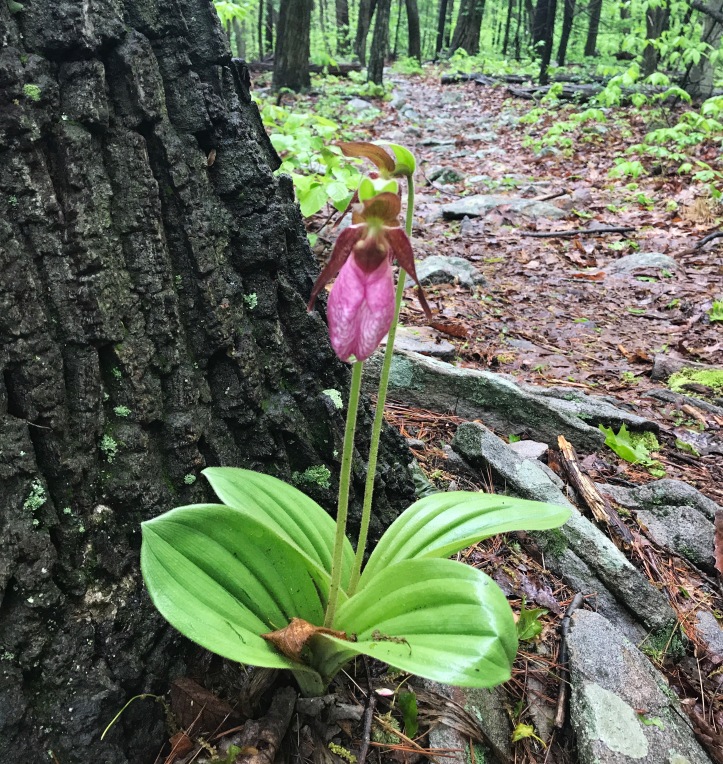 Later found out it’s a lady slipper orchid. I was so confused by it and the fact that there weren’t any others around. I finally, FINALLY came to the turn off for the shelter and begrudgingly climbed the .1 miles downhill. The shelter had 4 bunks, which were of course taken by the faster people. I took a spot on the floor and set about heating up water as soon as possible. I made myself mac and cheese that I had been really excited to eat (with a tuna packet for protein), but it was SO bland. Stupid healthy brand. Zach let me use some of his hot sauce and i used ketchup packets for added taste. The meal was somewhat saved by my girl scout cookie dessert. Won’t be buying Annie’s again. Here’s a picture of our cooking bar at the shelter and Jimmy and Zach doing their bed setup:

All this time, I was still wearing my wet shoes because I had to filter water and use the privy before I could huddle into my sleeping bag. The path down to the spring was steep, but thankfully not very long. The idea of getting my hands wet was really unappealing, but there’s no way around filtering water. I also had to filter extra water so that I could deal with my menstrual cup (extra hand washing before and after, and then the washing of the cup itself). But I will take that annoyance over having to pack out tampons.
A young woman showed up around 730. She’s northbound from GA and has a very minimal setup. No stove. No dry socks. No thank you. Now I’m listening to a whippoorwill caterwaul while people shift about in their bunks. hope the feeling in my toes comes back soon. It’s going to be a cold night.
Mile 1129.5 to mile 1143.2 (13.7)

Creature feature: so many redwing blackbirds. A few cows. A deer print in the mud. And a bunny came to the edge of the picnic table while we all lay in our sleeping bags at twilight. Heard two bard owls right the major climb around mile 11. their call sounds like “who cooks for you!”