The commute: getting to the GA mountains edition

Yesterday was a long day that was both important and incredibly exhausting, complete with a whopper of a caffeine headache for most of the day because I’m officially off the sauce. I woke up in Raleigh at 7:30am, rented a car, drove 45 minutes north on a stretch of highway that I have been on a thousand times, and spent 4 hours soaking up the linguistic gems of the south while visiting with my grandmother. Here’s her back porch and the sprawling backyard that my brother and I used to catch lighting bugs in when we were younger: 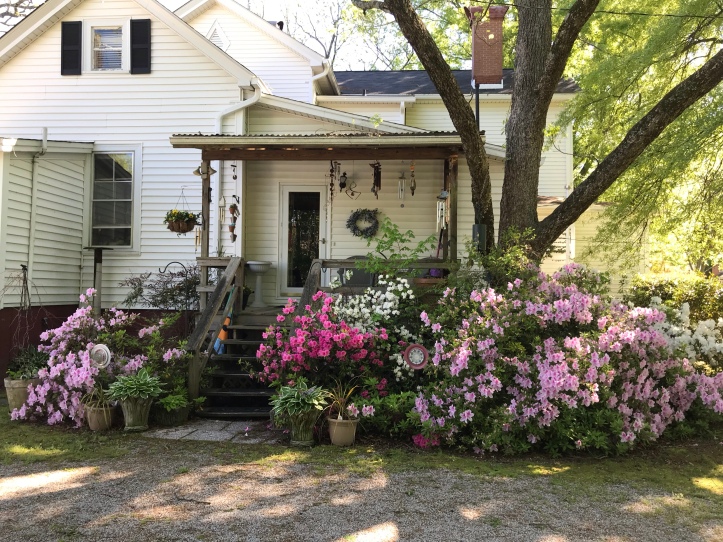 On my way up to Raleigh my mom asked me to buy cards, so without asking why, I grabbed a deck at the grocery store while getting lunch food. As predicted, she wanted cards so we could play a game called “golf” that I taught her when she came to visit in CA. We managed to squeeze in a few rounds which made for a fun break from trying to figure out what to talk about.

My mom and I decided to leave my grandmothers sooner than necessary so she could rest and my mom could make the 4 hour drive home. Around 2pm, I switched into my hiking clothes and regretfully handed my street clothes to my mom to take home with her. I wasn’t quite ready to make my transformation into hiker wear for the rest of my travels, but that was the easiest way to unburden myself from them. I gave my mom the handful of bits and bobs that I had forgotten to add to the gear box I sent her last week.

I made it back to RDU with about 2 hours to kill before my flight, during which I went cross-eyed madly adding pictures to the posts for my 2017 hike. The tedium of the tiny screen is real, but it’s the only way to keep things moving along.

The flight to Atlanta was uneventful and mercifully short. An old friend (“LCA” for blog purposes) from the years that I lived in Atlanta came to pick me up at the airport and graciously let me crash at her place for the night. It was strange to pass so many old haunts on the way to her apartment near Emory university. 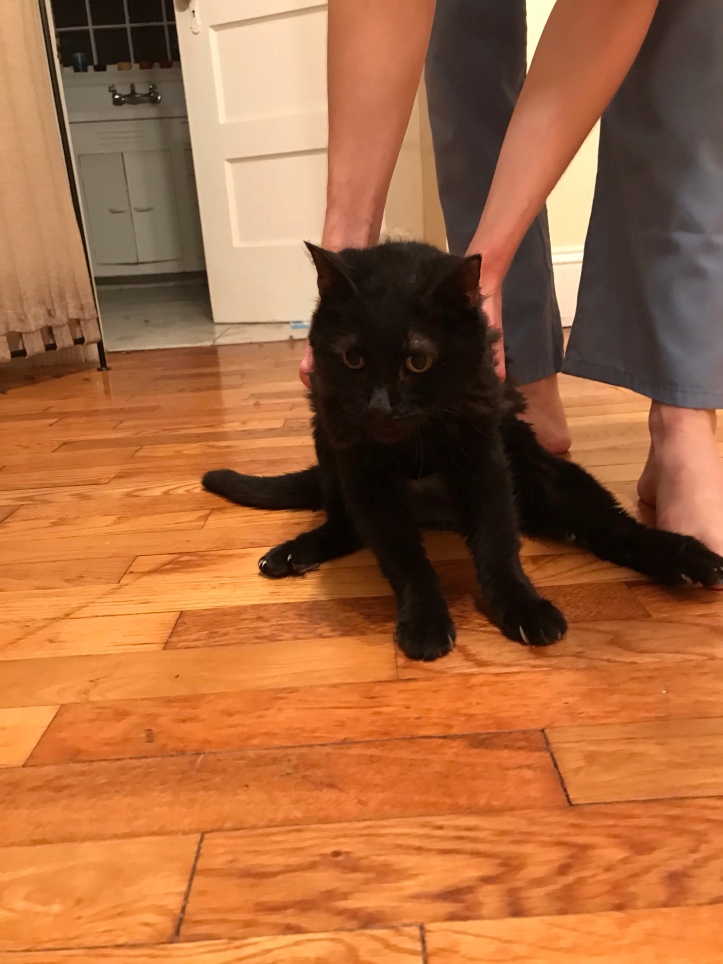 Meet Ramona, LCA’s special needs cat who’s been making it work for 15 years! LCA and I meandered through various life updates until about 11:30pm. I had originally decided not to ask my friend for this favor, but I’m glad I changed my mind because it was far better to see a familiar face and have the luxury of a slow start to the morning rather than waking up in a sketchy airport motel south of the city. 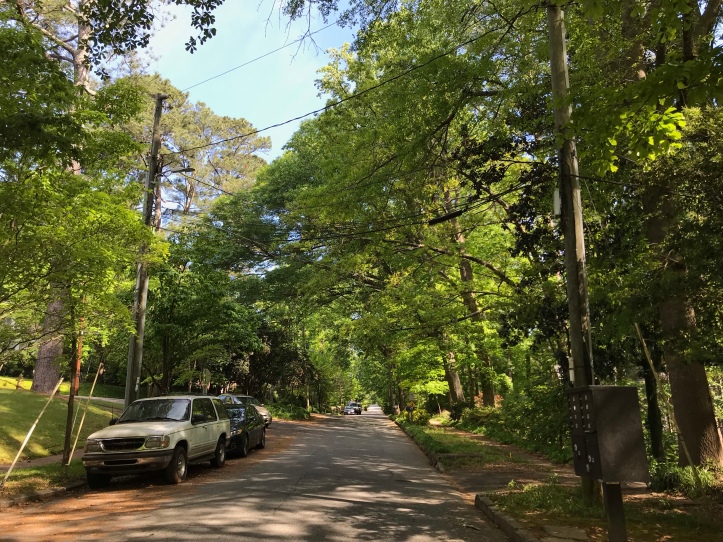 LCA left me with a key to her apartment and a cheerful hug goodbye. I slowly hatched my plan for the morning while periodically giving Ramona a scratch as I passed through her section of the apartment. I “walked” Oakland to work by talking to her during her morning commute on foot. Then I decided to take a lyft to Decatur to drop a letter at the post office and get lunch before heading to north springs MARTA station for my shuttle to barefoot hills. I’m grateful that my budget can handle the rides I’ve been catching because they have saved me a ton of time. This morning’s ride also kept me from walking very far on pavement, which is agitating to my persnickety right foot (the one that kept me off trail last summer).

My lyft driver took the back roads from LCA’s place over to Decatur. We passed giant houses and modest brick ramblers nestled among the green giants that I dearly miss from the east coast. IT’S SO GREEN HERE. I dropped my letter in the giant blue box outside of the Decatur P.O. The familiar feeling of being an oddball washed over me as I walked away from the P.O. in full hiker regalia and headed toward tacqueria del sol to grab an early lunch. I sat on the patio and enjoyed a couple of spicy tacos while the local professionals filtered in for their lunch breaks. There seemed to be a good number of gay people amongst the crowd, which was comforting in terms of mitigating one of the reasons I might get stared at.

I stopped myself from finishing the entire bowl of guacamole and sat on the curb in the parking lot to wait for my lyft to north springs station. A couple women who had been on the patio walking past me and one of them said in a friendly tone, “are you hiking?” to which I replied, “indeed I am.” she asked me where I was hiking and I truncated my convoluted answer for her by saying, “I’m going from GA to northern VA on the Appalachian trail.” She wished me luck and said earnestly “be safe.” I called back, “I’ll do my best!”

After 35 minutes in a herky jerky lyft car, I stood in the park & ride at the MARTA station waiting for my shuttle. Bret, the driver, showed up right on time and we went through the usual medley of introductory hiker topics while we waited for a second passenger coming from the airport.

With all hikers accounted for, Bret drove us up to barefoot hills with one stop at a gas station for me to grab a lighter (and Doritos, of course). The green of spring continues to be intoxicating.

After checking in, I set about organizing my food, back flushing my water filter, and rearranging some things in my pack. I decided to go light on the food so there was little to do except move things from the box to my food bag. For whatever reason the bug spray I asked for leaked. This is the same spray that leaked into my hip pocket during my last day on trail in 2017, ruining my headlamp and the waterproofing of the pocket fabric. I’m keeping it double bagged for now in the hopes that I can avoid another round of ruined gear. 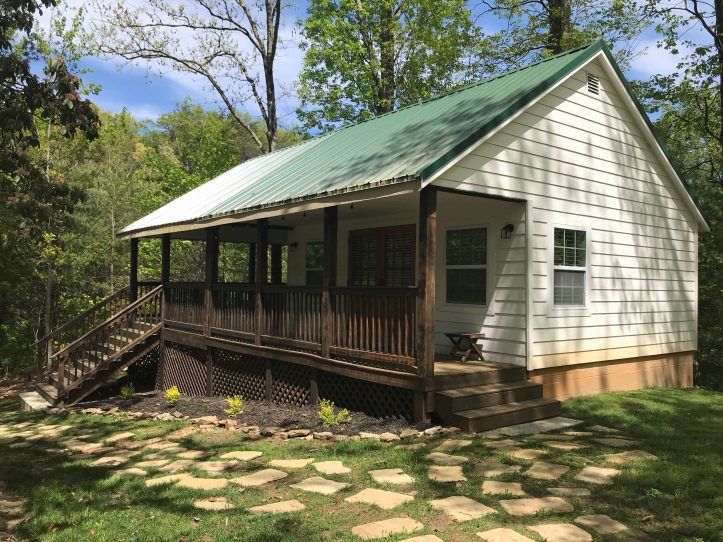 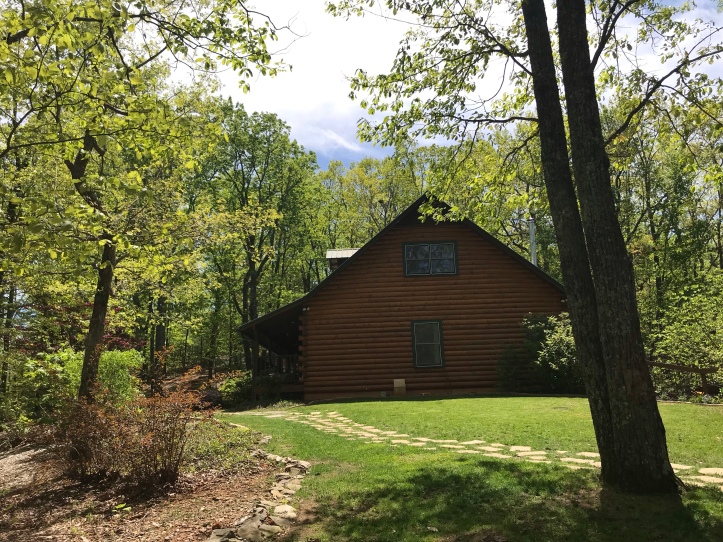 I went up to the office to see if they would recycle my mail drop box and found out that there is no recycling pickup here (thus, no recycling). Whyyyyyy. Then I settled into a chair on the sprawling back deck to write up today’s notes and do a bit of planning for my third box. About 10 minutes into tapping away on my tiny screen, an older couple came out of a door off the deck. The gentleman, a tall broad man with gray hair to his shoulders and unruly facial hair said in a jolly voice, “excuse me sir, but I’m going to smoke a cigarette out here if that’s okay.” I didn’t bother to correct him and had started to say, “alright then” when he saw his error and said, “I mean ma’am.” I waved him off with a kind “who cares” gesture and told him he could happily smoke his cigarette, and I would move along if I needed to. Then his wife used “he” referring to me in a sentence (can’t quite remember the context), but quickly changed back over to she. I suppose it could have been a teaching moment for gender neutral pronouns, but I didn’t have the energy for it, so I just let them flounder and settle into feminine pronouns.

The couple are on a three week road trip from Florida and decided that rather than making their way all the way up the east coast, they’re going to stay farther south where the weather is better. Today’s mission involves prospecting for gold, and the gentleman showed me his ziplock bag of dirt in a 5 gallon bucket. I politely engaged with them for awhile, sharing my hiking plans and hearing about the dangerous wildlife of Florida. Then I extracted, saying I needed to go do my “homework,” which is partially true.

The rest of this evening looks to be pretty quiet. There’s one other hiker staying in the bunk house. He has a toiletry that is chock full of pill bottles and looks like it weighs 5 pounds on its own. I don’t envy his load but he’s made it this far from amicalola, so he’s doing okay (barefoot hills is in Dahlonega, which can be a first stop before starting or a pit stop about 3 days in. He told me that the approach trail was challenging and rather than tell him he has much harder climbs ahead of him, I said “what made it challenging?” When his answer involved talk of elevation gain, I couldn’t manage to avoid saying, “well that sounds like what we’re here for.” As in, gee that sounds like HIKING. Halfway wanted me that I might have trouble with the newbies around me, and I can already tell it’s going to take some effort to not sound like an insufferable veteran. Probably doesn’t help that it was past my snack time and it’s day 2 with no caffeine.

A shuttle just dropped off a handful of hikers, so I’m going to finish this one before the day is over and stop staring at my phone for awhile. Tomorrow: hiking!

Creature feature: a cranky dark gray and light gray bird hoping to get to its nest in the eaves of the porch