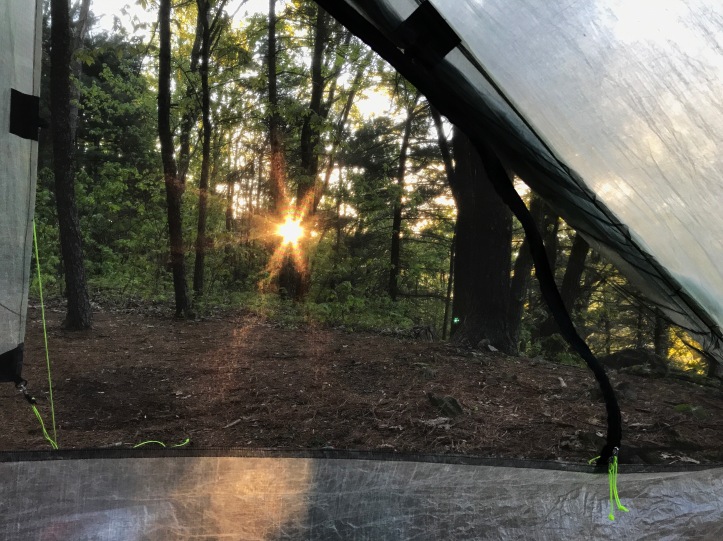 Another cold morning, although not quite as frigid as yesterday. I woke up almost exactly the same time as yesterday (558 to be exact). Sadly, the sunrise was mostly yellow and gray, so I debated between going back to sleep or getting up to make breakfast. My stomach decided for me, so I walked across the trail and down the hill to take my first cat hole. As Zach described it, pooping in the woods IS rather peaceful. I little hard on the knees, but not bad.
After that experience, I untied our food bags and brought them over to the little firing. No sign of stirring from Zack or the street, but I felt eager to get moving because of the temperatures, so I started packing up the gear in my tent. As I mixed peanut butter into my muesli, Zack crawled out of his tent. He made himself coffee and ate a granola bar with peanut butter and honey on top. The straight, whose trail name is Wall Street, which I should probably use instead of calling him the straight, came out of his tent shortly thereafter. He stood there with his perfectly groomed beard and remarked about how it was nice that the cold mornings were behind us. Meanwhile, Zach is holding his gloved hands up to his little pocket rocket flame for warmth and I’m wearing 85% of the clothing I brought with me. Zach and I both grunted in his direction and went about our routines.
I left camp while zach packed his bag, his tent still fully in place. The first mile was a bit rocky, but it quickly turned into a leisurely set of rolling ups and downs. I got water at a little stream directly on the trail (as in, I sat down in the middle of the trail and filtered water) because our camp site last night didn’t have a water source. I need to fashion a scoop cup because the sawyer filter water bag is the bane of my existence. I think it’s actually made of water repellant material. A scoop will make it much easier to fill the squeeze bag.

I hit PA state game lands after a road crossing and also stumbled upon a wild eyed hiker pulling their pants up after some sort of function about 30 yards from a water source, which is a no no. I got a stiff, weird vibe, so I didn’t pause while I muttered hello and hiked on by. 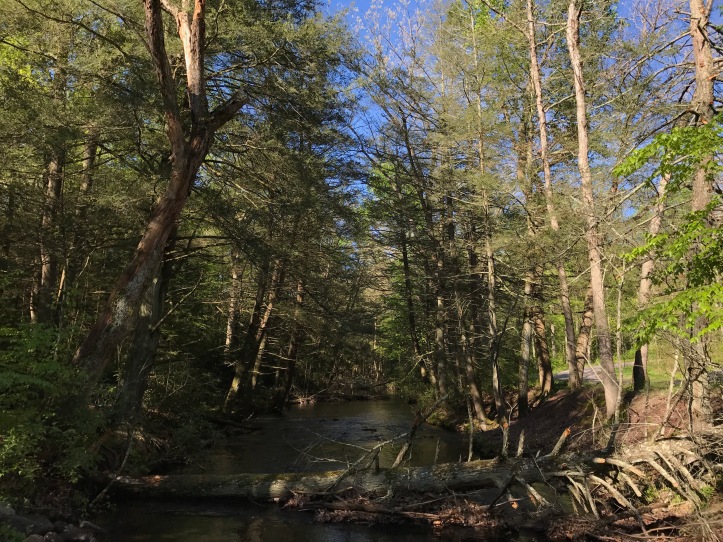 The woods over the next mile or so were filtered with morning light and birdsong. There were probably a dozen little stream crossings making for a nice walk. Also saw this little guy between two rocks. 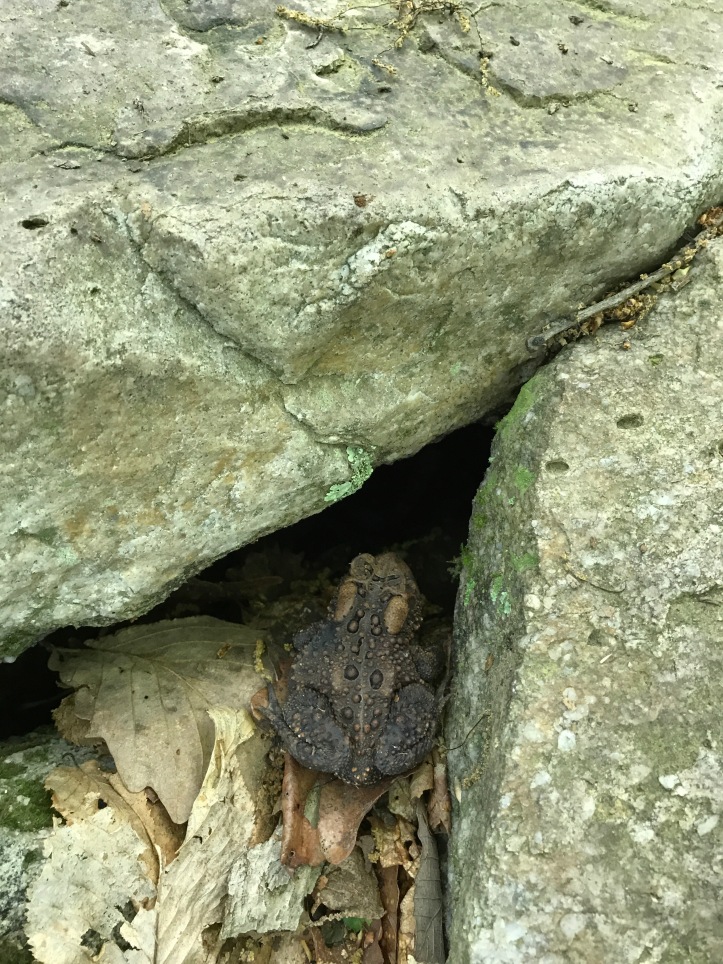 Then came a rocky hill that wasn’t steep, but it kept going after teasing little flat sections. I had a partial view of dehart reservoir for some of the hill. Around 9, I texted Chrissy to say that I was interested in catching up with them and she let me know that they hadn’t even eaten breakfast yet!

Zach caught me on the never ending hill and we had a laugh at the slowness of the other half of our group. When we got to the campsite, they were STILL packing up. As I laughed with Jimmy about their delayed start, Chrissy yelled from her tent, is that checklist?! Is she here already?? And then she gave a congratulatory whoop, because she’s a whooper.

Apparently they had quite a night with a few porcupine visitors that scared everyone except halfway because he was snoring his face off all night. Zach and I left the nerds to their packing because we got cold just standing around, and I had water to filter at the stream a mile away. 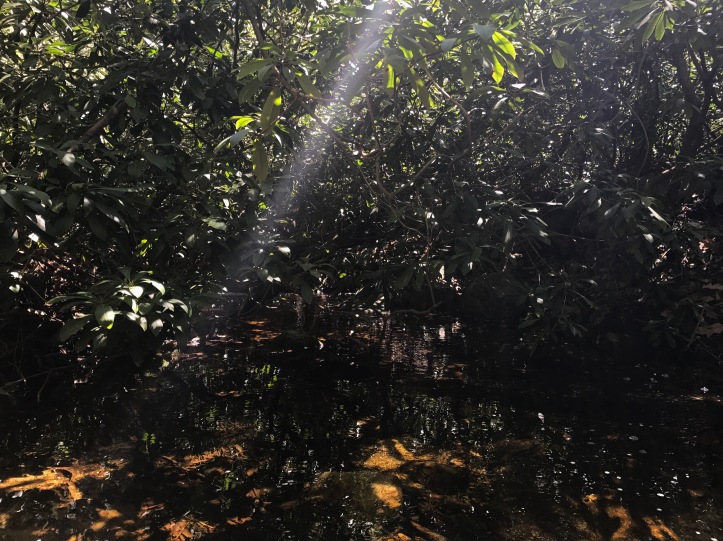 The little stream had a hearty patch of rhododendron alongside it and I felt like I was in the jungle while I sat on a rock and squeezed that infernal water bag over and over again.

Much of the second half of today’s trail had rhododendron. I’m sad they aren’t blooming yet, and I hope I haven’t somehow timed my hike to be too early for all of my favorite forest flowers. I lost my phone signal right as I hit the stream and didn’t get it back until Chrissy and I stopped for lunch at the campground that used to be an old coal miner settlement. Or it has a trail that leads to the settlement? I’m not sure, but it has this mailbox with the trail register in it.

After a lunch of tuna wrap with crushed Fritos and a dash of honey, my phone caught a signal. At that point, I should have had the wherewithal to warn people that I might not have a signal the rest of the day (sorry mom). Who knew a seemingly not remote section of the trail would be a complete dead zone? (turns out we were adjacent to a Fort Indiantown Gap military base, so that’s my guess)

After lunch, I felt tired and my feet were getting sore. At that point, I’d covered about 10 miles. I also felt dejected by my inability to keep up with anyone in the group. I don’t necessarily want to talk and walk. In fact, I prefer to walk in silence, but something about getting passed all the time drives me nuts and makes me feel weak. That feeling opened the gateway for other sad feelings, and I spent a few minutes trying not to fall on my face while crying. I decided to listen to comfort music (my trusty running playlist and a sad playlist my steady made), which helped a little bit. I also saw a few new birds, which helped remind me about part of why I’m putting myself through this: to observe the natural world around me. 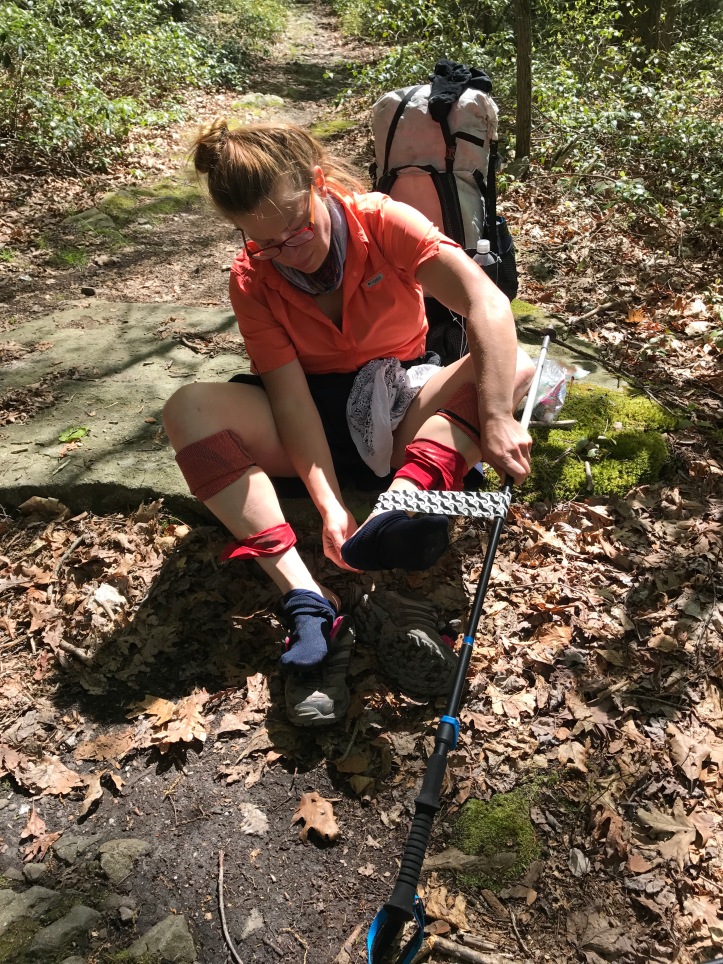 About a mile from our intended stopping point, I ran into Chrissy plopped in the middle of the trail rewrapping the sad spots on her feet. That gave me a chance to be in front her for awhile. The trail eventually switched from rhododendron to mostly evergreens with a black shale like rock that flints when the light catches the surface just right. I heard a loud rushing sound off to my left, which eventually materialized into this fast moving creek.

Rausch creek to be exact. It’s set well below the ground level with high eroded sides and trees perched with exposed root systems. We are camped at the tent site about a half mile from the shelter spur trail. The creek nearly drowns out the gunfire from military field exercises nearby.

Anyway, we all decided we would rather camp at a tent site than near the shelter because of the inviting creek. We had another great fire around which we ate our respective starchy weird meals and laughed about nonsense. There were tiny white iris looking flowers by the creek bank where I filtered water. They were the size of my pink fingernail and had delicate purple stripes. 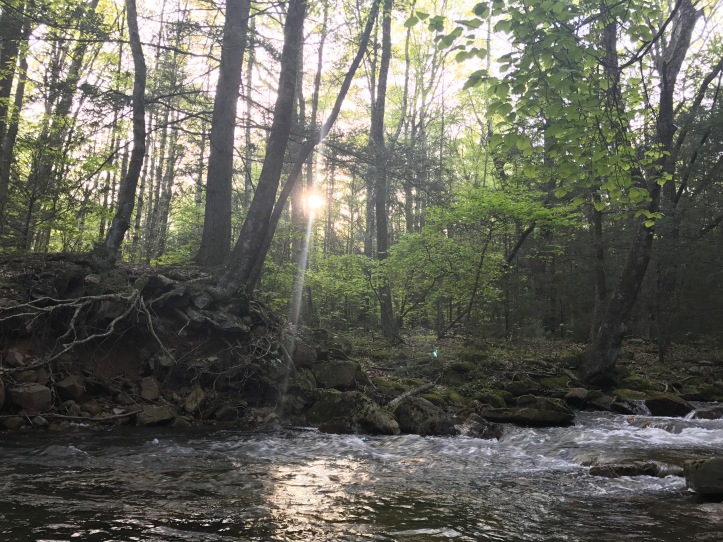 I soaked my feet in the frigid creek water for as long as I could stand to help soothe the throbbing after a longish day of rock dodging.

I’m not sure what’s happening with the group after Thursday. Chrissy and halfway are contemplating a zero day. Zach is more in the mood to keep moving. Jimmy has a friend coming to meet him Thursday and will likely do short days until Chrissy and halfway catch up with him. I’m not sure what to do. It feels too soon for another zero, and I’m not sure that I want to be a third wheel with Jimmy and his friend. Zach is ready for higher miles than me. I’m torn between the recuperation of a zero and guaranteed company and the desire to stay a little bit ahead of my schedule. If I keep moving, I could end up alone for who knows how long. Or I could meet another fun group and settle in with other people for awhile. At some point, all of our schedules will shake things up anyway. I’m not doing this to be alone, and I’m not doing it to meet my next best friend. Okay, enough deliberating.

For now, I’m going to go to sleep with the sound of creek to my right, the moon shining off to my left (I placed my doors so that I can get the eastern light in the morning), and a helicopter circling very close by.

Creature feature: a little black and white zebra striped bird that hopped along a tree trunk and was really fun to watch, a bird with a greenish yellow cap and chest and a darker body color, and what I think was a navy colored bird with a bit of white flashing on the wing and in the tail feathers. No clue what any of them are. Oh and a chipmunk skittering along a log somewhere in the rhododendron tunnel after lunch. A frog (toad?) tucked between two giant rocks that I happened to notice as I was stepping over it. And a black and white beetle (lady bug size) with crazy painted shell.